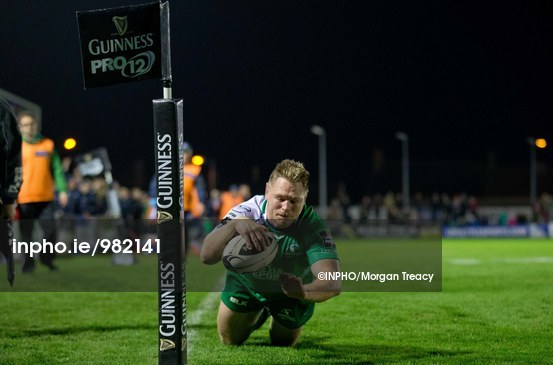 
Take a moment, enjoy it. Connacht are top of the PRO12 table after seven rounds. They are gearing up for a trip to Thomond Park in round eight later this month to face second placed Munster in a seismic fixture. Friday’s nervy three try 14 point victory over an improving Benetton Treviso side helped Pat Lam’s men leap frog the Scarlets and has turned heads around Europe.

If you only go to one Connacht away game this season, then Limerick on November 28 is the time for it. No venue has proven to be more intimidating. No opposition are more challenging for the westerners in the professional era. They’ll need everything on their side but they’ll go there with a shot at making monumental statement.

A position at the top of the table is great but the real battle is only beginning. Connacht had an opportunity to steal and edge early on this season in their bid to make some major progress and they’ve grasped it. They’ve got a seat at the table now and it is a whole new ball game from here on.

First, they need to take stock. Rest some walking wounded. Assess their overall position and not dismiss two weeks of European action too readily either. They won’t, they haven’t before under Lam and they won’t now.

He’ll rotate for sure and manage the workload with the phenomenal five day 7,000 kilometre Russia trip taking over all plans for a few days but he’ll go out to win both games against Enisei and Brive.

Momentum is key and a defeat in either game (even next Saturday at 8am Irish time in Krasnoyarsk where extenuating circumstances prevail such as -12 temperatures) will be a blow to that and Connacht will target progress in the Challenge cup again this season but the Munster game is now an incredibly important fixture. Hardly a must win but very much an exciting opportunity.

Look at last season, it was such a mixed bag for sure but progress was made. The end result was a failure to progress to the European Cup but in the most heroic of circumstances. An extra time loss to Gloucester after a display that underlined how far this team has come.

Victories over Munster and Leinster backed that up earlier in the campaign but three successive home defeats to Ulster, Glasgow and the Ospreys showed how far they had to go too.

Nothing that has transpired so far this season can answer the question of whether this team are ready to bridge the gap to the top sides in the league. Friday’s victory at a dry and breezy night in the Sportsground illustrated the incremental improvements but also highlighted some worry defensive frailties that are making it more difficult to put games to bed sooner.

Robbie Henshaw’s return brought a surge in positivity. The fullback role freeing him up for some big carries. His try just after half time was a game breaker and a huge boost after a tentative first half where Connacht held a slender 9-5 lead.

Treviso had rattled Connacht in that first half, dominating some early scrums and profiting from a series of home errors to edge the territory and possession stats.

The try from the 15 times capped Irish international was only one element of his contribution. His leadership in defence proved key also.

The decision to keep the successful centre partnership of Craig Ronaldson and Bundee Aki in tact paid off too with Ronaldson notching seven kicks from eight and picking up the man of the match award for his efforts.

Treviso refused to wilt even after the early blow of Henshaw’s try. Jayden Hayward added to his first half try with another on the 50 minute mark to keep the game very much in the balance. Tom McCartney was sprung from the defence on the hour and scored a neatly worked try at the front of the lineout but picked up a hamstring injury in doing so. He’ll be out for six weeks.

Matt Healy also picked up an injury after he scored a barnstorming try with five minutes to go to set up a shot at the try bonus point which ultimately fell short.

Treviso scored with the last play of the game to give the score a more accurate reflection but even without the bonus point, Connacht left the field content. Healy’s knock isn’t as serious as McCartney’s, Cooney is also expected back promptly, both should be available for the big trip to Limerick.

Lam will have other concerns too but the performances of Dave Heffernan, Ultan Dillane, Nepia Fox Matamua and Eoin McKeon from the start combined with the big impact from the bench from the likes of Finlay Bealham, Conan O’Donnell, Eoghan Masterson and new signing AJ McGinty will be the source of plenty of optimism within the management team.

Europe takes centre stage for now then and the work done there will be key to maintaining momentum but make no mistake, the next crunch fixture is coming up at the end of the month. Connacht haven’t won in Limerick since 1986, but in all the visits since, they haven’t come into the treaty city with so much momentum.