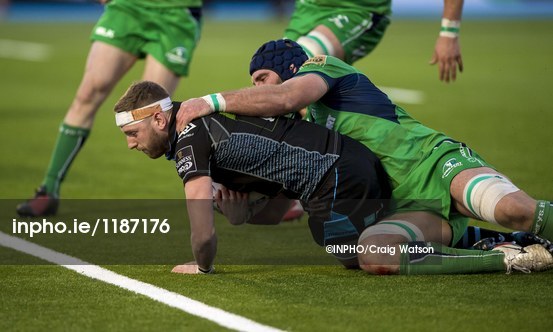 by Rob Murphy at Scotstoun

Let’s call a spade a spade, Connacht are simply not a top six side this season. As a result, it is very easy to argue that they’ve done nothing to suggest they deserve a place in the Champions Cup next season. But when free passes are given up to struggling Italian sides, perhaps that’s less of a relevant point.

On a warm Saturday evening that felt more like a late May end of season tussle and in a game played out on the home side’s artificial pitch, reigning PRO12 Champions, Connacht, produced a 40 minute performance when an 80 minute one was needed. Those 40 minutes were indeed a brief return to the stunning rugby we saw 12 months ago. But perhaps unsurprisingly they proved merely a flash in a campaign with more lows than highs.

Connacht led by two at half time but collapsed in the third quarter to trail by as much as nine, before launching a late fightback that certainly provided them with opportunities to win this game against the Champions Cup quarter finalist. Ultimately though, like so many times before this season, that comeback fell short by dint of the same old failings, shaky set piece play, chaotic restarts and basic handling errors at key moments.

For sure, Connacht can point to a poorly refereed offside line in the first half where Glasgow were able to hang in there on less than 20% territory and possession as a result of a jarringly in-the-face defensive line that pushed up on every phase. They can also point to some bad luck with injuries too but the final result really was hard to argue with all the same.

The defeat, ends all hope of securing an automatic Champions Cup spot this season and leaves Connacht with just one final route to the European Cup next year, an end of May play off with one other PRO12 side and the seventh ranked side from France and England. That is already seemingly like a fairly daunting task for a team really looking out of sorts and in need of a pivot in overall strategy and game planning.

The automatic qualification wasn’t lost on Saturday though, Glasgow away is not even on the radar for must-win games at the start of the season. Home defeats to the Ospreys, Munster, Glasgow and that away loss to the Dragons are where the PRO12 season was derailed. Two of those came as a result of a nightmare pre-season. The others were just a team out of kilter and making mistakes.

And yet, Connacht are still a formidable side with huge potential. That was evident here. The first try, brilliantly finished by Niyi Adeolokun but made by the electric Tiernan O’Halloran who started at the proverbial 100 miles per hour and would have maintained that in the second half but for a knock to the knee which slowed him down.

Glasgow hit back and even led 10-5 after capitalising ruthlessly on the two visits to the Connacht 22 they were afforded but by half time. It was Connacht who were in front 15-13 thanks in main part to a wonderful try from John Muldoon, that included a brilliant bit of footwork and 20 metre break by Andrew Browne and a bull dozing clear out from Sean O’Brien.

No wonder that Connacht bounced in at half time and looked in good shape. Sure, the sceptics pointed to a failure to convert on their dominance with a larger lead and there was always going to be a kick back from Glasgow but it was hard to envisage how swift and impressive that would be.

By the 60 minute mark the hosts had scored two converted tries from Finn Russell and Ali Price. And they were a man up thanks to Jack Carty’s sin binning for a needless high tackle that led to a bout of fisticuffs for good measure. Carty would return in the final ten minutes but didn’t get that chance to make amends.

Yet it had to be said, that even during that sin bin, Connacht regained the initiative pulling within six at 27-21 with 18 minutes left. They set up a couple of promising positions in the home 22 with a chance to go into the lead. Only to knock on once and over complicate a lineout the second time. All in the script for the season.

Glasgow stood firm and rubbed salt in the wounds with a fourth try bonus point right at the very end from 36 year old Sean Lamont, who carved a perfect line to score after his side regained a restart in the Connacht half with just four minutes to play. This after an John Cooney penalty had narrowed the gap to one score at 30-24 this time.

There is an argument to say Connacht might be better off in the Challenge Cup next season. They will be under a new management regime and in need of a new start. But after missing out on this weekend’s quarter final by the tiniest of margins, this group of players will be desperate to get back there.

To do that, they’ll need to win two away play off games in late May. To do that, they’ll need some consistency and to hold off Edinburgh and Cardiff from overtaking them. Still plenty of rugby ahead then. But it would be foolish to back this team at the moment after this display in the second half. Notwithstanding the strength of opponent, this simply wasn’t good enough.