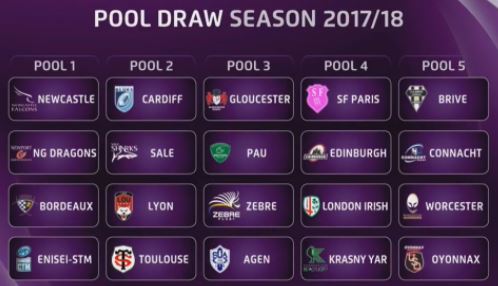 It’s assumed that the teams facing relegation in France and England won’t give a fiddler’s about the Challenge Cup, but is this view justified by historical results?

Since Connacht’s English opponents Worcester look doomed after 6 defeats in the English Premiership, and our French rivals Oyannax and Brive are two of three Top 14 teams in the running for the automatic relegation/relegation playoff positions, it seemed sensible to cut any analysis of this down to the bottom feeders.
Therefore I decided to look at the 36 teams relegated from the French and English top flights in the last dozen years – since the Challenge Cup returned to pools of 4 teams playing 6 matches apiece – to see how bad their European records were.

Allowing for a few draws and pools occasionally having two teams from the same country, you’d expect Average Premiership Team RFC to win on average just short of half their games, so just under 3 wins from 6 matches.
Their French equivalents should average a trifle less again as they have more chance of being drawn against one another in the pool stages.
So it was a bit surprising to see that over the twelve year period the worst teams in these two leagues could expect to win 2.3 (Top 14) and 2.7 (Premiership) pool games from six, not hugely lower than what you’d expect if you picked teams by chance.

Beyond these averages, and accepting that there’s a small sample size, the old trope that the French teams – especially the weaker ones – don’t care about the Challenge Cup, doesn’t really stand up when viewed over the full time period of twelve years.
Five teams have been relegated while winning more than they lost in Europe in the last twelve seasons. Most notable amongst these was Agen in the 2006/07 Heineken Cup. The unfortunate French team had the same won 4 lost 2 record as Leinster, who topped their group, with Gloucester and Edinburgh bringing up the rear.

However only one relegated French team – Lyon in 2014/15 – has completed a winning season in their European pool in the last 5 years, and for the last two seasons the relegated French teams have pretty much thrown their hats at the Challenge Cup, so there does seem to be a downward trend in French performance, albeit a recent one.

In fact last year three French teams finished with one or zero wins, including Pau who finished comfortably mid-table in the league but lost 6 on the trot in Europe.
In contrast Brive, who finished one place and one point ahead of them in the Top 14, lost only one Challenge cup game while topping their group. So it seems attitude is more relevant than league position in estimating how well a French team will do in the Challenge Cup.

In that case Oyannax’s inclusion of almost their entire Espoirs team in (and corresponding omission of their first XV from) their European squad looks promising for Connacht.
Brive on the other hand seem to take the competition seriously, with only one wipeout season a few years ago blotting their record. They typically win more than they lose, regularly make the playoffs, and even went unbeaten in the pool stages mid-relegation-season in 2011/12.

The Worcester performance is easier to predict. Leeds have recorded winning European seasons on no fewer than three occasions whilst getting relegated, but in 7 of the last 9 seasons the about-to-be-relegated Premiership side has lost either 3 or 4 games. The two exceptions were one of the Leeds’ relegation teams, and the hapless London Welsh team of 2014/15 who lost all six.

Whatever about any historical precedent, with Oyannax expected to put out effectively an “A” side in Geneva at the weekend, and Worcester visiting the following Saturday, Connacht should look to go into the double header with Brive on top of their pool.