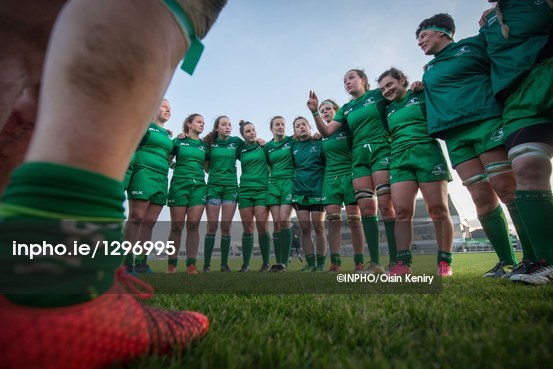 By Alan Deegan at the Sportsground.
[soundcloud id=’364707308′ height=’false’]
A gloriously bright winters day in the Sportsground provided a fitting backdrop to an equally glorious historic first victory for Connacht Women over their Munster counterparts in the 2017 interprovincial series.

Three superbly crafted second half tries wiped out a 10 point half time deficit and provided enough of a buffer to hold off a late charge from the southern province powerhouse.

The big, vociferous home crowd had the Clan Stand rocking as the final whistle blew and Connacht had achieved their first ever interprovincial victory over Munster.

Connacht opened the match in bright fashion, moving the ball with fluency but a ill-judged 5-metre lineout stemmed their early momentum.

The strong running visitors, with centres Aine Staunton and Niamh Kavanagh punching big holes in the Connacht defense gained the ascendancy and carved out a well worked opening score on 10 minutes.

A beautifully disguised pass from outhalf Rachel Allen sent wing Laura O’Mahoney scything through the Connacht defense to score the first try of the match. The conversion was expertly added by flanker Edel Murphy. 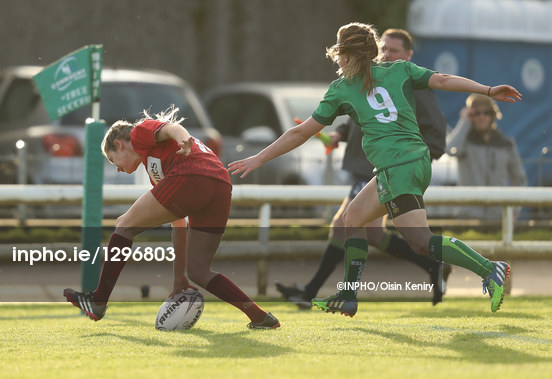 The score bolstered the powerful Munster team and they dominated both territory and possesion for long stretches of the first half.

However Connacht showed admiral grit, determination and superb scramble defense to deny the former 3 times interprovincial champions any further tries. The only score the women in red could conjure up was a well struck penalty from Murphy on 26 minutes.

The remainder of the half belonged to Connacht and they showed a glimpse of what they were capable of when they moved the ball from inside their own 22 to the Munster try line in 4 minutes of continuous, accurate, high quality running rugby with glorious 40m run from centre Aine Staunton almost giving the home team their first score of the match. But some very stoic defending from the visitors relieved the pressure and the halftime score read 0-10.

Connacht survived an early attack from Munster at the start of the second half and then went on the offensive. They concentrated on moving the bigger Munster players around the field with some deft handling to go with tremendously effecient recycling skills.

The moment that seemed to change the course of the game was the introduction of Ireland scrum-half Mary Healy in place of the busy Shannon Touhey. The experienced half-back brought subtle changes to the point of attack that stressed the Munster defense, which had been coping admirably with the continuous waves of Connacht attacks.

Gaps started appearing in the red wall as centres and Shannon Touhey and Jane O’Neill along with fullback Mairead Coyne broke the gainline more regurlarly and wings Orla Dixon and Ali Miller revelled in the extra space that this provided them.

The home pack, who were dominant in the scrum all day with Laura Feely and Anne-Marie O’Hara causing their more celebrated opposite number all sorts of problems, also started to generate more forward momentum, with No. 8 Nichola Fryday and second row Nicola Caldbeck showing an excellent work rate.

Connacht’s first try came on 60 minutes when the hard tackling flanker Edel McMahon burrow through a ruck to get the vital touchdown after some tremendous forward driving from the pack. An excellent conversion from fly half Hilary Griffin made it a 3 point match. 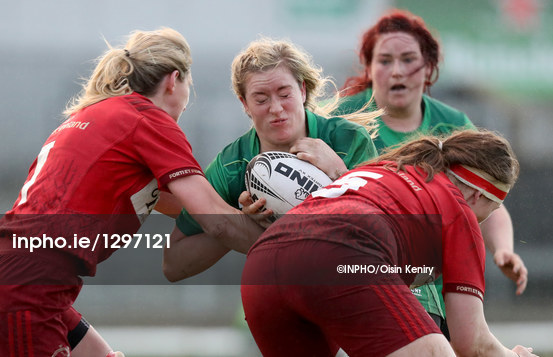 Bouyed by the score, the girls in green came storming back up the pitch and after McMahon took a superb line to crash through the Munster defense, the brilliant Ali Miller was held up short having beaten 3 would be defenders. However, a crafty piece of rugby intelligence saw hooker Ciara O’Connor dive over the resulting maul to score by the undefended corner flag. 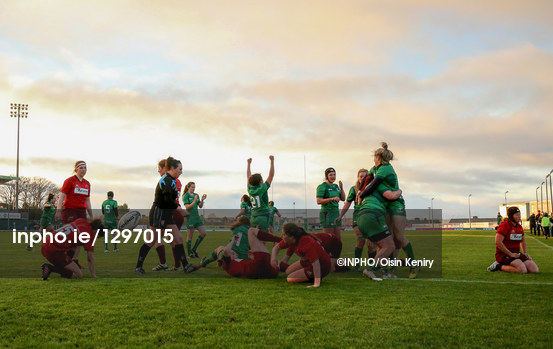 Connacht now led by 2 as the game approached the final 10 minutes.

The noise level in the Clan stand ratcheted higher, and so did the quality of play by the home side. They were dragging Munster hither and tither as the fresh legs from the bench gave them an injection of energy.

More sustained pressure saw the forwards drive to the line and the powerful second Amelie Roux crashed over for Connacht’s 3rd try on 75 minutes. The successful conversion from Coyne looked to have sealed the victory. 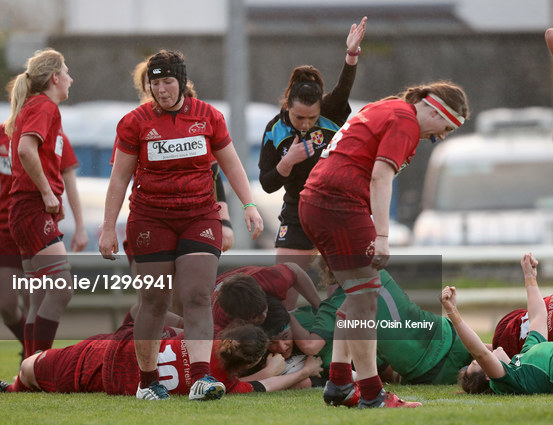 However Munster showed their tenacity in taking the game right back to Connacht and following a sweeping move from one end of the field to another, involving most of the backline that was held up just short, prop Fiona Hayes dived over in the corner to bring the score back to 19-15.

A nervous couple of minutes was expertly dealt with by the home side and an historic victory was well deserved.

Next stop for head coach Ja Naughton’s team is an away match to the champions Leinster that kicks off at 5pm in Donnybrook next Saturday, Dec 9th.