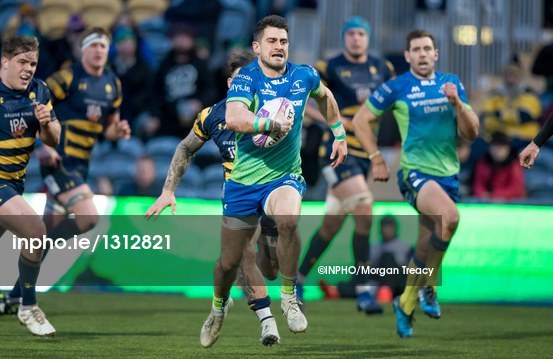 By Rob Murphy at the Sixways

Game number 18 in the season brought a first draw and delivered a guaranteed quarter final spot in the Challenge Cup but overall, it did absolutely nothing to help garner a clearer understanding of just where this group of players slots in on the European rugby pecking order.

After a performance that mixed drama with calamity on Saturday, Connacht left England in reasonably good shape and still on target but everyone else remains none the wiser as to where the high water mark might reside for Kieran Keane’s men.

As second favourites for the competition, Connacht probably would have been expected to comfortably deal with the challenge of a Worcester side in the lower echelons of the English Premiership.
On the balance of play at least, their dominance in the final quarter should have seen them over the line but once again, poor decision making and execution let them down at a crucial juncture.

As has been a trend this season, Connacht fought back from sizeable deficits twice in this contest, having trailed 12-0 early and 24-14 at half time.
More still, they managed to minimise the damage of a double sin binning in quick succession conceding just seven points during the nine minute period of playing with 13 men.

Add to all that a solid attacking mindset that caused Worcester lots of bother and you have a good picture of a contest that had no clearly defined pattern.
Connacht completely dominated the second half here and had the edged ahead at any point, might have been cruising by the full time whistle but Worcester married a thundering four try first half effort with a resilient rearguard action after the break to more than earn the draw.

At kick off, Connacht were well equipped. The injured Denis Buckley and Finlay Bealham left them without first choices props.
Jack Carty was badly in need of a rest so was not included either. Outside of that, this was Connacht’s strongest line up.
And considering the fact that Peter McCabe and Conor Carey once again produced stirring displays in the front row, the wealth of resources there means that Connacht didn’t suffer.

At out half, Craig Ronaldson was starting in the number ten jersey for the first time in three seasons.
His coach afterwards felt that that he “started a little skittery and then he warmed into it.”
It’s clear that the back up fly half spot remains a puzzle with the Kildare man just ahead of the injured but yet to shine Steve Crosbie and the now out of favour Andrew Deegan.

It wasn’t just Ronaldson that was off key a little in the early exchanges.
The entire starting lineup were seemingly in cruise control and paid a hefty price, shifting two tries from clever grubber kicking by the home side.
Rising Welsh star Josh Adams set up the first for Perry Humphreys before the latter created a try for Sam Lewis after winning the race for a loose ball with Darragh Leader and fly hacking the ball into space for his openside to score.

At 12-0 and with just ten minutes on the clock, Worcester again found themselves in Connacht’s 22 looking for a third try with a lineout five metres out.
Something clicked with the men from the west at this point. The urgency was cranked up and the defensive stand that followed marked the start of a significant fightback.

By the midway point of the half, Connacht had an extra man after Chris Pennell was sin binned.
The outside centre had been instrumental in everything good from the Warriors but while he was on the ground and part of a ruck, he tripped Kieran Marmion up, halting a potential try scoring break.

Connacht shunned the easy three points on offer. They went for a scrum and John Muldoon scored after breaking from the base while Worcester readied themselves for a huge drive.
That was all the westerners mustered from the sin bin period however and by the time Humphreys got in for try number three, the home side seemed in total control.

Yet back came Connacht and after Bundee Aki had a try disallowed in the corner, they remained undeterred with Niyi Adeolokun scoring a couple of minutes later. He pounced on a dropped ball that went backwards as Connacht attacked and, took advantage of a distracted and stalled defence to burst clear and score and reduce the gap to 17-14.

Then came the double sin bin with Quinn Roux off for persistent offside, and Jarred Butler following him within a minute for a needless high tackle.
The pack had been taking a backward step all too often up to that point and the frustrations had come to the fore.
Worcester scored a fourth try just before the breakthrough Adams and appeared to be set for victory at 24-14 with a bonus point secured.

After half time however, Connacht were a completely different side. They started with five minutes of a ball retention and clever rugby while down to 13 men.
That set the tone, eased them back into the contest and ensured no further damage was done during the period.
From there to the hour mark, the tide turned and Connacht restored parity through the boot of Ronaldson and the side stepping and accelerating feet of Tiernan O’Halloran.

The final quarter will rankle however as the continued dominance up front and the lively attack play out wide somehow failed to yield another score despite a reeling home side.
Much like the Leinster game at Christmas, when composure was needed, it deserted Connacht.
Time will tell if that is all part of a learning curve or a more alarming sign of the limitations of this group of players.

So Connacht are pool winners and if they topple bottom side Oyonnax by any margin next Saturday (2:30), they’ll be guaranteed a top four seed and a home quarter final.

But there’s more. A bonus point win will put them in the running for a top two seed and the possibility of a home semi final too. For that to happen they need a narrow win from Gloucester at home to Pau on Friday and a win for Stade Francais at home to Edinburgh on Saturday night.

Still with us? more power to you.