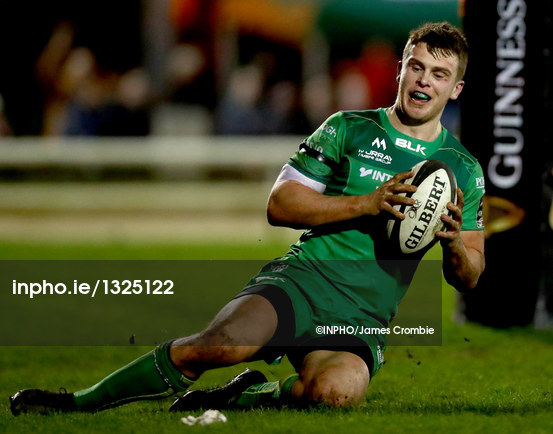 A comfortable two score victory over the Ospreys is certainly something to be savoured at any point in a campaign, as history shows Connacht have had plenty of struggles with this fixture over the years.
This was far from a masterful display from Kieran Keane’s men though and, as his style, he wasn’t shy in underlining as much afterwards.

There are lots of opportunities to nit pick and we’ll get to them but bottom line is this: Connacht have now won seven home games on the bounce at the College Road venue and after a nightmare start to the PRO14 season the ship appears to be have steadied.
The yearly objective of securing a place in the Champions Cup is now back on the table.

Not that Kieran Keane is interested in such details. The battle for fourth spot (which would be enough to secure a place in Europe’s elite competition) is intense with Connacht now one point behind Cardiff and seven clear of the Ospreys who lie in sixth yet the Connacht coach says he pays no attention to all of that.

It’s all about the performance, win or lose, the Connacht coach is only going to be focused on things like set piece execution, cohesion and application in defence. He didn’t see enough of that on Friday and said as much afterwards.

In some ways, it made sense that he wasn’t happy, the visitors had controlled the game for long periods, dominated at times but they had been repelled and frustrated by a resilient home effort and in terms of score taking efficiency this was arguably Connacht’s most impressive display of the entire season.

The turning point of the game, in fact basically the winning moment, came in first half additional time.
The Ospreys had been in total control for the ten minutes before the break with one try on the board and a second seemingly on the cards.

They trailed 6-5 but were retaining ball well and winning key battles at the breakdown, then Dmitri Arhip made an egregious error, leading with the forearm while carrying the ball.

The penalty relieved the pressure on Connacht, but also opened the door for an unlikely late surge in the half.

They kicked into Ospreys territory before winning a second penalty at a lineout on halfway and then set up one last attack in the corner. The execution from here was patient and powerful with Eoghan Masterson driving over the line from five metres out.

That gave Connacht a 13-5 half time lead that the balance of play scarcely reflected.

There is a confidence about Connacht that seems different than what we’ve seen in the past.
The brashness and sense of adventure might be curtailed but the team are self assured and hard to rattle it seems. That shone through during the second half where the visitors continued to retain possession well and probe for chances but they met a brick wall in response and had to settle for a Sam Davies penalty.

Tom Farrell exudes this in the number 12 shirt. With as much as eight first choice players out, the 24 year old leads the entire league in offloads in the tackle and is second in terms of carries.

On 68th minutes he scored the try that all but killed off the Welsh resistance, his upper body strength in the contact and his ability to drive his way out of the tackle just outside the 22 created the score as he burst clear for his 6th try in 16 appearances this season, a phenomenal strike rate for a centre.

Much to the frustration of Kieran Keane, the Ospreys did strike back breaking the line with Reuben Morgan-Williams getting the score and although big screen replays appeared to cast doubt on the grounding, the Connacht coach was more concerned with how the replacement scrum half was able to break through so easily. It hardly mattered though as the two score margin was never broken.

So while Connacht CEO Willie Ruane and his team focus on the business side of things and no doubt realise that a place in the Champions Cup next season could make a big difference to the bottom line starting with ticket sales but extending to expansion of the brand and increased sponsorship opportunities, they might also be accepting a little short term pain for long term gain.

The Challenge Cup has been a hugely beneficial place to reside this season for Connacht. It has allowed Kieran Keane to develop his side’s style and to ensure some depth to his squad but what is perhaps unusual compared with previous regimes is that he has kept this developmental approach for some pivotal PRO14 fixtures too. The decision to go with Craig Ronaldson at out half over the more experienced (in that position) Jack Carty was an eye opener that paid off.

Ronaldson delivered a superb display missing just one kick at goal from seven opportunities and keeping the backline on the front foot by coming into the gainline hard and fast.
He also defended astutely and had a crucial first half intercept that probably saved a try.

Keane has been looking for a bit of competition in this position, he’s finally got what he was looking for in that regards.

The Ospreys had six away with Wales for this match. Connacht have four in the Ireland squad at the moment and while they won’t see that contingent until late March, they’ll be expecting the likes of Finlay Bealham, Jared Butler, Eoin McKeon, Niyi Adeolokun, Denis Buckley, and Sean O’Brien to return over the next few weeks as this run of games extends to Zebre at home next week before trips to Treviso and the Cheetahs. Plenty of unique challenges ahead but for the moment, progress is being made.