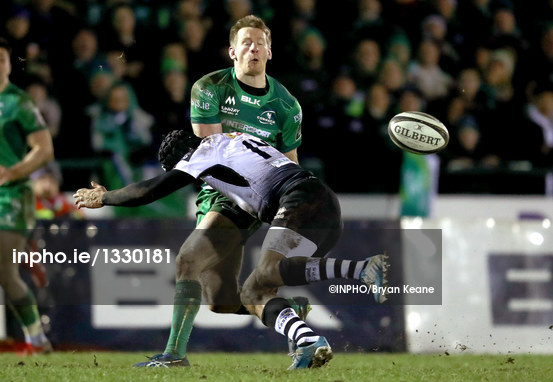 
This calamitous display underpinned by panic, lethargy and stubbornness underlined why Connacht are unlikely to muster even a meaningful challenge in the race for Champions Cup qualification between now and the end of the season.

The Sportsground was deathly silent at the full time whistle on Friday as supporters tried to make sense of a performance that was as shocking as it was unexpected.

It’s not news to anyone out west but Connacht have simply not recovered from the turnover of players that hit this squad in the summer of 2016 after the title win in Murrayfield.

As would be the case in any professional team, they have not recovered from losing a superstar in Robbie Henshaw with no recompense and the real impact has come on the strength in depth in the squad.

Nights like Friday highlight as much but more on that shortly.

Connacht were out-foxed here by a impressively well drilled, determined and aggressive Zebre side. The Italians were able to force turnover after turnover and quickly turn counter attack ball into scoring opportunities.
They scored two tries in the first half from Renato Giammarioli and Gabriel Di Giulio.

And held a 12-6 lead at the break after Connacht shunned a late penalty try push at scrum time to take the safe option of three points.

In the second half Andrew Di Marchi stretched the lead to 19-6 with a third try coming after Kieran Marmion’s box kick had been easily blocked down.

Considering Di Giulio’s first half try had come from an inexplicably poor piece of play from Tom McCartney, it was easy to feel as though Connacht were the makers of their own downfall.

While a response eventually came, with a couple of long overdue yellow cards and some experienced replacements, the basic errors continued. Darragh Leader scored a try during the first sin bin but Craig Ronaldson missed the crucial conversion

While the pressure continued, Connacht’s inability to win a lineout had reached such proportions that one wondered if it might had been better to throw the ball in backwards with their eyes closed.

At full time, the thought process was simple, this was the sort of one off shambles of a performance that we hadn’t seen in the seven previous home games and might not see again this year.
Underpinning this ridiculous display was a feeling that this is what happens during the course of a campaign when a team doesn’t have the quality in depth to seriously expect to be anywhere near a Champions Cup standard. That’s the basic reality.

Cast your mind back to the summer of 2016 for the moment. When the celebrations subsided and the squad broke for their holidays, Connacht lost AJ MacGinty, a first choice out half.
Aly Muldowney, an all conquering second row.
And were just one more season from losing John Cooney, one of the best back up scrum halves in PRO14 rugby. And that’s before we even talk about the loss of their marquee superstar Henshaw.

The replacements for those players over the following 12 months were, Andrew Deegan an out half from Australian club rugby. James Mitchell a former English under 21 star, who was vying for a back up position at Sale.
James Cannon, a well established back up lock for Wasps and local lad Eoghan Griffin who returned from an injury plagued few years at London Irish.

All four have persevered with honour and while there is more to come from them.
No one can seriously expect them to reach the heights of what we saw from the quartet they have been brought in to replace.
Nights like Friday night highlight the difference between then and now. They underline what voices in the west said at the time, that allowing such an exodus without a meaningful strategy for replacing that talent would be hugely detrimental to the legacy of Murrayfield.

Connacht are not right back where they started before Lam and Elwood.
At full strength, with internationals back and a slightly more balanced injury list, you’d have Bundee Aki, Tiernan O’Halloran, Niyi Adeolokun, Kieran Marmion, Denis Buckley, Quinn Roux, Ultan Dillane, Jarrad Butler and John Muldoon all starting.
That makes Connacht a side capable of beating anyone at this venue.

In the last 18 months, think of post Murrayfield wins over Ulster (twice), Leinster, Wasps and Munster and the seven game run of home victories before this one.
That’s what this team is capable of and for this reason, people shouldn’t lose all hope for the Challenge Cup knock out stages in the spring.
At full strength, Connacht might well beat Gloucester and even upset Newcastle in the semi finals. All is not lost for this season.

The Pat Lam era didn’t end well. The realities of an unbalanced system where a player like Henshaw can be plucked from the location he is developed and transferred into a province like Leinster already overflowing with talent without any meaning full reimbursement from the power that rules both teams is truly unsustainable in the long run.

The reality is starting to hit home that as this misfiring campaign enters the home straight.
Champions Cup rugby is not going to happen via the PRO14. Fourth place is a pipe dream when two key rivals for that spot (Cardiff and Zebre) have beaten you twice and the other (the Ospreys) still have to play you on their home turf.
Fifth place seems unlikely too. Anyway, all that would mean is a likely play off with Ulster in Belfast.

How poetic then that as we watched a Connacht team struggling for a proper footing at the top table that Michael Bradley, the coach who was at the helm for a turbulent seven years during a time when resources were at their lowest should return with his clearly well coached side from Italy and help lift the lid on the problems that still exist in his former home.

Connacht fly to Italy to face Treviso this week and then down to Bloemfontein to face the Cheetahs, inconsistency is their cornerstone now. The attitude might well be much better for these two fixtures and we might even see a surprising win in Venice which would be good for morale but will do little to paper over the cracks. The rebuild continues and problems persist.