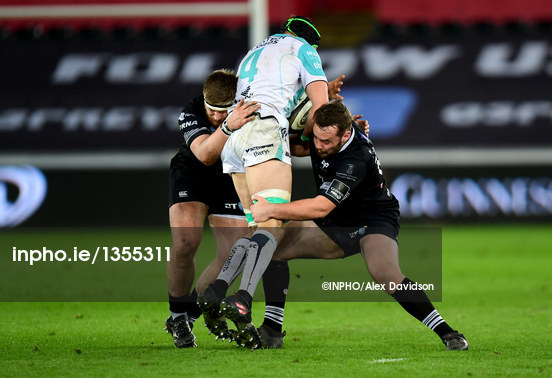 By Rob Murphy at the Liberty Stadium

Sport can be unfathomable at times. Just how has this group of former winners of the competition become one of the league’s worst sides this season? After Friday’s one sided loss in west Wales, they sit among the bottom four teams out of 14, in combined points total, right now and they have lost three of the games they’ve played against the sides below them.

A dozen of these players who played on Friday were on the field in Murrayfield less than two years ago after that remarkable victory yet those medals and memories are at odds with what is on display at the moment and that must be extremely frustrating. Pride is all they have to play for at the moment and there doesn’t seem to be much sign of a collective plan to harness that feeling.

Individually it’s easy to detect the inner self belief both in terms of body language and what they say to the media but that simply isn’t translating into a collective self belief and their collective posture is one of shoulders slumped and heads down once things start going wrong.

Up until last Friday, the run of defeats had been mitigated somewhat by the narrow margins in so many of those encounters. They hold a league high six losing bonus points and that certainly accounts for some of the 13 losses during the campaign but after a poor start here, they found themselves 13-0 down by the midway point of the first half, they ultimately set a season low in losing margin at 29 points.

The Ospreys had started with some supremely accurate goal kicking from Dan Biggar to go 6-0 in front and Connacht had responded with possession and territorial dominance underpinned by a lack of incision (basically a similar narrative to almost every defeat this year). The opening try from the hosts came from an intercept in their own 22 and to make matters worse for Connacht, it was during a sin bin period with Dan Evans the transgressor.

Sure Connacht hit back from that Jeff Hassler breakaway try with one in response from temporary blood sub Craig Ronaldson but by half time the gap was 20-10 after Evans made up for his sin bin to carve a simple line through a porous midfield defence from Connacht.

After half time, Jack Carty missed a straight forward kick in front of the posts and while he and his teammates argued that it had sailed just the right side of the posts, the kick was far from on the money and should never have been in doubt. That proved to be the turning point as Connacht were off their feet at the breakdown on their own ball soon after and from the resulting penalty, the Ospreys set up camp in the Connacht 22 and turned on the style.

Scott Otten got their second try at the back of a maul to stretch the lead to 17 and the Connacht effort completely disintegrated from there with missed tackles, totally malfunctioning lineouts and a scrum that barely functioned. On field bickering and dropped heads only added to the bad optics. Just six days on from losing the most important game of the season, Connacht were imploding.

Kieran Keane can be thankful that the Ospreys simply ambled on to the end once the bonus point was secured by Ashley Beck and the icing on the win was confirmed by Hanno Dirksen with 14 minutes left. It doesn’t get any easier for Connacht, Glasgow away is next. This group of PRO12 winners from 2016 are now cannon fodder for teams like that and collectively, they can’t seem to muster a coherent and constructive response.