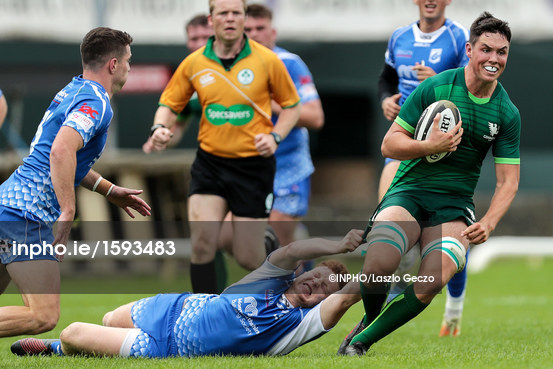 A dominant display from the Connacht Eagles pack laid the platform for a winning start to their Celtic Cup campaign over a dangerous Dragons side on a bright and breezy day in the Sportsground.

Connacht missed a chance of an early try when Murphy latched onto badly overthrown lineout by Dragons in the 22, the Eagles pack drove and recycled the ball 4 times before sweeping it out the the backs but the rapid line speed of the defense snuffed out the chance.

Having failed to convert a driving lineout maul when knocking on as they reached for the line the home side continued to exert pressure on the Dragons, eventually forcing a penalty which out-half Conor Dunne slotted.

The Dragons showed their teeth by scoring an excellent try off a first phase move. They swept the ball across the field from a lineout, rapid wing Rio Dyer joined the line on an arcing run  from the blindside, negating the rush defense and then drew the sweeping cover to set full back Owen Jenkins away and he fed wing James McCarthy who scored in the corner.

A period of good possession rugby from Connacht, although lacking any real penetration, led to another penalty just outside the 22.  Dean slotted it to regain the lead.

The Eagles pack were completely dominating their opposite numbers as the half wore on. A penalty earned inside the 22 was quickly taken by Kerins and almost ended in a try for centre Sean O’Brien but a bad bounce from a delightful chip through from Dean skewed away from the onrushing centre. However the Eagles were playing through a penalty advantage, and Dean took the points with a simple tap over the bar.

The Dragons played some excellent rugby for the next 5 minutes as they pulled the Connacht defense from one side of the field to the other, holding possession well and always looking threatening with ball in hand. Their good play was rewarded when centre Conor Edwards crashed through the midfield defense and dotted down under the posts, leaving a simple conversion for Evan Lloyd.

The Eagles upped the intensity of their forward play and earned their 7th penalty of the day which Dean boomed over from  just shy of the 10m line.

36″  12-12
With half time approaching the game opened up and swung from one end to another as tiring defenses allowed more space for attacking play, but mistakes by both sides prevented any further scores in the half of an entertaining encounter.

The initial skirmishes of the second half were dominated by Culliton who forced not only forced mistakes from the Dragons backline, won 2 penalties, he also scored a brilliant individual try.

As Dragons tried to gain better field position while trying to kick from just inside their own half Culliton blocked down the kick, then hacked the loose ball down the field. He was first to the bouncing ball which he dinked forward, then expertly scooped up and crashed through the covering defense to score. Not a bad way to show the watching Connacht team management that you are worth a place in their academy.

The Eagles confidence was high as they were dominating both territory and possession, however an elobate backs move failed allowing the rapid Dyer to burn the scramble defense to score after he retrieved a loose dropped bal. Lloyd adding the 2 points to put the Dragons back into the lead.

The try just sparked even more intensity from the Connacht pack and after
4 minutes of solid scrummaging which saw them win a plethora of penalties, the Eagles scrum marched over the line with No. 8m Mike Wilson getting the touchdown. Dean expertly converted.

A surfeit of substitutions from both side led to a scrappy end to the match, but did not change the moment of the match as Connacht worked hard to deny the visitors a losing bonus, but dogged Dragons defense gave them their just rewards as the game ended on a score line of Connacht Eagles 24 Dragons 19