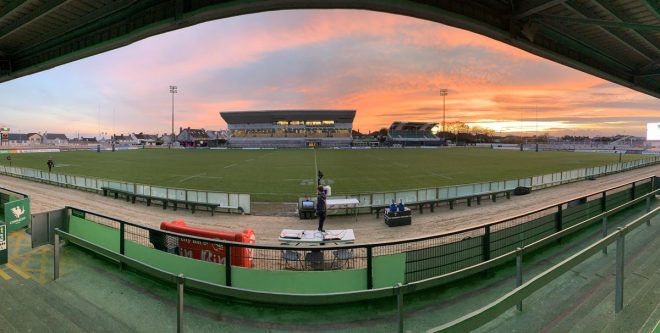 The return of Champions Cup rugby to Galway, after a two-year absence, should be cause for celebration, excitement and anticipation but instead, trepidation is the most prominent emotion amongst the Connacht rugby public this week. That’s all thanks to the injury crisis that has engulfed the squad with Montpellier on way to Galway this weekend for Sunday’s 1 pm kick-off at the Sportsground.

The pool is looking daunting right now with current Top 14 Champions Toulouse, a strong Gloucester side that have overwhelming dominated European fixtures against Connacht down through the years and big-spending Montpellier all on the agenda. The lack of pressure might be the one positive from all of that, no one outside of the west is expecting anything from Connacht in this group bar maybe a home win, perhaps two if things go well.

Things haven’t gone well in the build-up, the injury crisis has concentrated on the forwards and in particular the second row, the foundation of Connacht’s power and set-piece prowess in 2019. Ultan Dillane is in a race to be fit this week, Quinn Roux is still a few weeks off and Gavin Thornbury is unlikely to be ready before Christmas. All three players are more than capable of matching any player at this level.

The other key issue is Finlay Bealham, the nine-time Irish international went off injured five minutes into the Leinster game on Friday and is a major doubt for the next few weeks with an ankle injury. There’s a doubt too over Kieran Marmion after he missed the Leinster fixture. All of that somewhat mitigates against the good news that Connacht’s most prolific and effective back-row forward Colby Fainga’a is back in the fold.

Connacht’s opponents on Sunday are an experienced European outfit but they have rarely challenged for honours in this competition. In fact, they have failed to win more than three of their group games in each of their last five seasons in Champions Cup rugby. The competition has only seen glimpses of the best the big spenders from the Occitanie region have to offer.

Montpellier is a soccer-mad city ensconced in France’s rugby heartland. It is very different to Toulouse and the interest in the game has had to be nurtured over the last 15-20 years. When Connacht visited the city in 2006, the team played their rugby in a small all ground on the edge of the city with a capacity of under 5,000 but within a year they had moved to a brand new purpose-built stadium and the drive to make the city a rugby stronghold was in full swing.

They were formed out of a merger in 1986 making them one of the youngest clubs in the TOP 14 and only made it to that level in 2003. Yet slowly over the years, they have established themselves as a force when it comes to spending big money. It hasn’t bought them a Top 14 title, (they were runners up twice in 2011 and 2018) but they did manage to secure the Challenge Cup trophy in 2016 for their efforts.

Current head coach Vern Cotter is under some pressure after last season’s poor campaign, a first-round playoff exit and failure to progress in the Champions Cup was no doubt not what billionaire owner Mohed Altrad had in mind but the New Zealand born head coach has been in charge in Claremont and Scotland during his time in Europe and won’t be overawed by the pressure of their mid-table start to the season.

Montpellier’s strength starts with size in their pack but there’s an underpinning of experience coming from a back row with Louis Picamoles at number eight and Yacouba Camara at openside flanker. Summer signing Guilhem Guirado at hooker has seen plenty of big European days as well. All three of those players were involved in the French world Cup squad.

They also had no less than four players involved with Georgia at the World Cup, three of them might start at the weekend Mikheil Nariashvili and Levan Chilachava are in line to start or at least be involved as props while Konstantin Mikautadze was a starter in the second row during last weekend’s draw away to Toulon in the Top 14.

In the backline, the firepower is certainly eye-catching starting with a half-back pairing that has the potential to be among the best in the tournament. Samoan Kahn Fotuali’i is a dynamic unpredictable threat with electric pace while former All Black Aaron Cruden has been a big addition since he arrived. Keep an eye out too for Tomoci Nagusa, he’ll be among the competition’s top try scorers if Montpellier go well.

The two world Cup winners involved with Montpellier are Francois Steyn and Hendre Pollard, the latter is recovering from surgery on a broken cheekbone and won’t see action, the former Steyn, didn’t feature last weekend but might well be on the bench come Sunday as he works his way back into Top 14 rugby after a few weeks of celebrations and recovery.

The battle for second int this pool could well be wide open for that reason one would expect Montpellier to come to Galway with the view that this fixture could well define their entire campaign. For Connacht, a home win here would make next week’s trip to Toulouse very much a shot to nothing with back to back December fixtures against Gloucester then deciding how competitive they can be, it really does all come down to this fixture and it is a shame that so many key players won’t be available to Andy Friend.