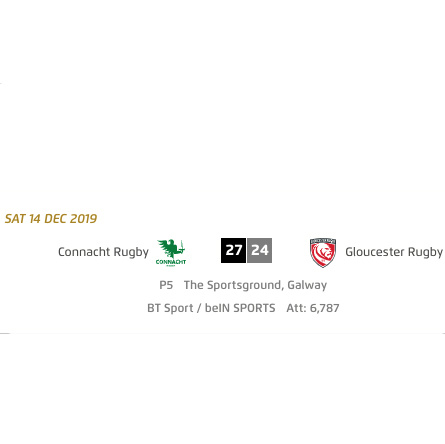 YOU would almost forgive them for their lack of faith.

Hundreds of unfortunate supporters had strolled out of the Sportsground and onto College Road with four minutes still to play in Saturday’s pivotal Champions Cup encounter, having watched their beloved Connacht slowly unravel over the course of an error strewn second half. All seemed well and truly lost.

In their defence, there was little hope or no hope. Connacht really did look dead and buried in both the game and the competition. Gloucester were 11 points clear, having blitzed the home side with three tries in 20 devastating minutes either side of the hour mark and they were on the verge of a second successive bonus point win over their Irish rivals.

What happened next, however, will live long in the memory of all those who were still in the ground. It was born from a sense of belief that was instilled in this group of players a long time ago, a sense of self assuredness, comfort in home surrounds and let’s be honest, a sense of the almost admirable arrogance that has kept this team punching above its weight for years.

Gone are the days where Connacht are almost apologetic about their place on the main stage. They are here on their own merit, they might not have the international caps or the budgets and – this is the slightly controversial part of this point – they might not even have as much superstar talent as any of the sides in their pool, but they bloody well have convinced themselves that they do, and no one is going to dissuade them of that.

This game had it all, bone crunching tackles, hair raising moments of sublime skill, seven tries, turnovers, line breaks and momentum swings from the get go.

Connacht started with the wind at their backs, Gloucester had won the toss and chosen to play against the elements. It had seemingly paid off as by half time they only trailed 10-7 despite having been stuck in their own half for almost 70% of those opening 40 minutes.

All seemed well in the world after a half hour with Connacht leading 10-0 thanks to a Caolin Blade try and the boot of Conor Fitzgerald. They had even dominated during Eoin McKeon’s first half sin binning.

Yet from the restart after that try to the 76th minute, they would be outscored 24-3. A stunning stat when you consider the amount of possession and territorial advantage they had during that same period.

Gloucester’s first half try came from a mix up on the restart between Kyle Godwin and John Porch. The resulting possession saw good ball retention, big gains and brought about their first try from Gerbandt Grobbler.

That meant they were turning around with the wind and trailing just 10- 7. Just like the previous week in Kingsholm, Gloucester’s second try was an intercept, this time from much closer range but with equally important timing. Powerful centre Mark Atkinson nabbed Godwin’s loose pass and set his team on their way.

Fitzgerald responded for Connacht with a penalty to make it 13-12 and for a few brief minutes they appeared to be in control. Yet brief is the word, because it wasn’t long before Gloucester were truly cutting loose on the hosts, bringing the voices of around 500 travelling supporters to the fore and tempting some Connacht eyes towards the exit signs.

Two more eye catching tries secured a bonus point, first from Lewis Ludlow, a breathtaking finish after a storming break from Lewis Rees-Zammit, and the second from Mark Atkinson as Connacht’s defence wilted.

Just how they managed to save themselves in one of the most frenetic and mystifying European contests this venue has ever seen will take some dissecting, but suffice to say it all started with a sin bin for visiting captain Lewis Ludlow.

He had ended up on the wrong side of the ruck slowing down the ball, the warnings had mounted, Romain Poite had lost patience but there were only four minutes level. Yet Connacht went about the task with poise and conviction, kicking to the corner first, executing a solid lineout before driving over the line with relative ease.

Shane Delahunt was the man at the end of that attack. The ever composed Fitzgerald took a swig of water, steadied himself and slotted the conversion, the game was now four points.

Two minutes remained. The restart was critical and early first half replacement centre Tom Daly nailed his task, rising and reaching out acrobatically in the air to gather the ball. From there to the end, they had full control.

Bundee Aki had a big break, Eoghan Masterson, Finlay Bealham, Ultan Dillane all had big carries. Stephen Kerins kept things quick at the base and the 14 men of Gloucester eventually wilted with Daly drawing the cover on an overlap and offloading brilliantly to Robin Copeland who cantered home.

A game they should have lost in one sense but one also that they should have won with consummate ease after the start they had, with Dave Heffernan, Dominic Roberston McCoy, Blade and Jarred Butler among the stand out players in the first half.

Aki was back to his best, while Jack Carty had done well in the unusual role of full back. Yet key errors cost them such comforts and put them in a hole they had no right to get out of.

One imagines, that’s what was on the minds of those early leavers, one almost imagines that many of them turned on their heels and ran back in the gates when they heard all the roars. You would hope they did.

No one is saying Connacht are going to win anything this season, but they are always worth watching. Right to the final whistle.