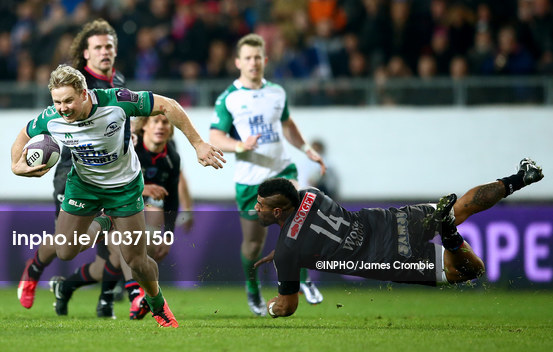 A truly sensational 80 minutes of rugby came down to the last few seconds on Saturday night as 14,887 supporters held their breath and watched Fionn Carr dance through tackles and burst towards the line. At that point, for all the world the game was over, the fiery winger in the twilight of his rugby career was about to write his own place in west of Ireland rugby folklore.

Seconds later, he was on the ground after an ankle tap tackle ended his progress and John Cooney’s supporting run had also being halted. Connacht finished the game with a series of phases on the home 22 while Grenoble fans held their hands on their heads hoping for a mistake and the 400 strong travelling army of Connacht fans hoped for a miracle. It didn’t come and relief swept through the home stadium.

A game that had ebbed and flowed had concluded with everyone on their feet in the atmospheric state of the art stadium. The westerners had stunned the home crowd with three brilliant, outrageous, mesmerising tries, all orchestrated by Matt Healy’s electric pace from full back in the first half to lead 19-3 before Grenoble pegged them back to 19-16 by half time.

In the second half, Healy crowned his all encompassing performance with an early try that put his side back in control. O’Leary’s boot had them up to 29-16 ahead again but back Grenoble came with their half backs sparking a revival that ultimately led to a Denis Buckley sin bin and two vital tries during the ten minute spell.

Buckley returned on 71 minutes and turned the game on its head once more by winning a penalty on the restart. Replacement scrum half John Cooney stood up and delivered the three points for a 32-30 lead but that only paved the way for one more score, a drop goal in fact, from the hosts. The winning score.

On statistics alone, this was a hard game to make sense of seconds after Matthew Carley had blown the final whistle. Grenoble owned the ball and bossed the territory stats yet Connacht made most of the gains with ball in hand, scored four tries to their hosts three and produced the game’s most electric moments.

So why did Grenoble triumph? in short it came down to Jonathan Wisniewski, a journeyman ten in his 30s with long past memories of international rugby, popping his head above the crowd and saying, ‘I’ve still got it’, ‘I’m still very relevant’ and ‘a game of cup rugby against a feisty and skilled opponent is my time to shine’.

The French star left no one in any doubt of his current form by the conclusion of the game, scoring the full house in his 23 point haul including a vital try that kept them breathing in the first half and a perfectly executed drop goal in the last minute that ultimately broke Connacht hearts.

All the while, Connacht were down to a fourth choice out half and when Shane O’Leary went off injured Robbie Henshaw had to take over and yet still they came so close to snatching a late win and a home semi final against Harlequins. Instead, they had to settle for the best morale victory of the season, possibly in the history of this Challenge Cup competition.

Scant consolation? Perhaps but there might actually be some solace in being part of a game like this. If this were a Pro12 semi final and the final game of the season it would have felt monumental but this Connacht side still have a huge amount to occupy the minds, starting with next weekend’s clash with Munster.

Jack Carty is on the mend, that’s good news. O’Leary showed some great sparks in this one, his crossfield kick for Connacht’s second try was brilliantly executed while his goal kicking and link play in the backline was crucial too but one odd crossfield kick in his own 22 proved very costly in the first half and two miss judged restarts cost his side as well. A mixed bag then.

By and large, the entire Connacht squad played their hearts out here, Niyi Adeolokun had a spectacular start to the game with two of the opening three tries and some stand out moments in defence and attack. Kieran Marmion was a constant threat, while the likes of Andrew Browne and Sean O’Brien were in fine form, driven on by the inspirational John Muldoon.

In the days and weeks ahead, they’ll need more from them and from others. Composure in one score games has been an issue this season. Four games have now come down to a margin of less than three points and Connacht have lost all of them. Pragmatism could well become an overused word in the next few weeks.

The immediate return of Carty and the forthcoming return of the likes of Ronaldson, MacGinty and O’Halloran will all help but key men will need to improve. Robbie Henshaw a fine example, he played second fiddle to Chris Farrell in the first half, falling off tackles and costing his side in the process. He’ll need to find one more surge at the end of a long season if Connacht are to get back to winning ways.

The Pro12 is all that’s left, Munster on Saturday, and then an unwanted by useful one week break before Treviso away and Glasgow at home. The inter-pro is big, a historic double over Munster would be a huge statement. Defeat won’t end hopes of a home semi final but it might start to introduce the concept of doubt in a side that seems to be strong on self belief. Whatever happens, we can rest assured that it’s going to be highly entertaining.