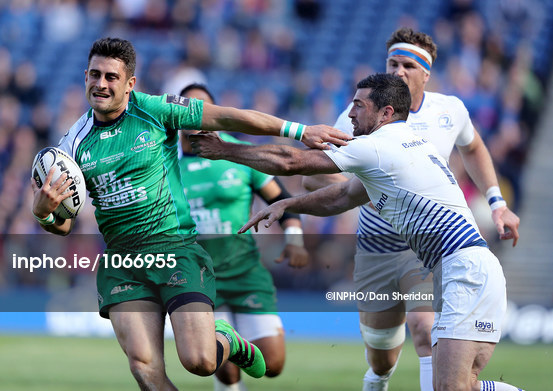 The audacity of it all. The rugby team that represents the province of Connacht are now PRO12 champions after a campaign where they made a mockery of conventional wisdom in every conceivable way. And a mesmerising performance in this final that neatly encapsulated the ambition and talent underpinning all that had gone before.

At a sun drenched Murrayfield on Saturday, the masterplan reached fruition and the heroes in green scorched Leinster with three never to be forgotten tries and 80 minutes of uncompromising, unyielding and uninhibited rugby. The perfect day.

Yet this match report can’t do the afternoon justice by merely covering the 80 minutes of rugby on the field. This game started at 4:10, not 5:30. It started when the Connacht team bus turned off Roseburn Street and in through the gates of Murrayfield. Players and management immediately spotted the sea of green that was there to greet them. ‘Game on’, the must have thought.

The bus pulled up outside the west stand entrance and as thousands of supporters in green bellowed out the loudest and most haunting rendition of the Fields of Athenry one is ever likely to hear as the team got off the bus and walked in. Pat Lam led the way, briefly turning around to take it all in, looking up on the packed steps and balconies all around that had provided a natural amphitheatre to the whole scene.

Afterwards, Lam spoke of the emotion in the Connacht dressing room after that welcome and his belief that it would only bring a positive reaction. The notion of hype or pressure from your own fans affecting performance has always been a ridiculous one and the novice finalists from the western province underlined as much by conjuring up a performance that has had the rugby world talking ever since.

The winning of the game came in the first half hour. Connacht withstood some early testers as Jamie Heaslip and Leinster came out with a fire and brimstone effort. However, the men in white were repelled and repeatedly disrupted by the westerners in the first ten minutes. Tom McCartney, Ultan Dillane and Eoin McKeon notched up some huge tackles during that period.

Such tackles allowed Connacht time to get to grips with the breakdown area where they initially seemed to be on the back foot, and where Eoin Reddan seemed to have the time to move the ball quickly. He would play second fiddle to Kieron Marmion from that point forward. It was a testing period but not one for panic and the early signs were good on that front.

The first attacking spark from Connacht came appropriately from a brilliant break out of the 22. Ambition and skill combined with AJ MacGinty’s brilliant pass releasing winger Matt Healy deep inside his own half. The kick and chase from the prolific try scorer had Leinster scrambling and led to a 90 metre gain. While Connacht didn’t score at that point, the tone was set. This was going to be a day of high octane rugby and Leinster better be ready. They weren’t.

The 15 first half points came quickly and decisively. The opening try from Tiernan O’Halloran came from a wonderful sequence of counter attacking rugby initiated by that man Healy, aided by a John Muldoon clearout, a sharp Finlay Bealham pass from the base and quick hands from Bundee Aki. Yet O’Halloran still had lots to do, attacking the inside shoulder and gliding through with neat footwork and wonderful balance.

The second try was even more astonishing. Healy’s fielding position, some incredible touches of class from Robbie Henshaw, O’Halloran, Aki and Marmion before Niyi Adeolokun had his major moment. The winger had been causing Luke Fitzgerald loads of trouble and proceeded to execute a chip and chase that included some incredible ball control with his foot before scoring a try that will never be forgotten.

By half time, Connacht were 15-0 up, the penalty had come from MacGinty after another brilliant break involving Aki. Leinster came back well after half time and kicked three points through Johnny Sexton. But the boys in blue were rocked once more when McGinty’s kick through led to Healy scoring try number three for the westerners.

Don’t doubt that it wasn’t over at that point, Sean Cronin at hooker, Zane Kirchner at full back and Luke McGrath at scrum half came off the bench to make a real impact for Leinster. Their scrum half kept them alive before half time, now those men were inspiring some actual real attacking rugby. Cronin scored to make it 20-10 and with 20 minutes to go, the nerves were frail.

Yet this was the end game scenario where Connacht thrive these days. The kind of end game scenario that defines this Connacht team. The truly brilliant Sean O’Brien encapsulated the impact off the bench with tackle after tackle. Andrew Browne and Dave Heffernan too, while 80 minute men Finlay Bealham and Jake Heenan never wilted. Injuries to both scrum halves created some adversity but the team as a whole just figured it all out.

And all the while, one man acted as the fulcrum to the entire mission, the first man in and the last man out, the leader for the ages, John Muldoon. He picked up the man of the match award for a captain’s display that will go down in history as one of the greatest in the PRO12. Tears flowed at full time from the Portumna hero who lifted the trophy to a backdrop of the 50 senior squad players and the 10,000 travelling army in green.

Outside, hours afterwards, the crowd had gathered round the railings cordoning off the team bus once more. They sang and roared for well over an hour as each player came out, signed autographs, posed for photos and joined in the songs. That was the culmination of the day and the season. Yet the manner of this win suggests it is only the beginning of this rags to riches tale. If they manage it right, the legacy could last for decades.