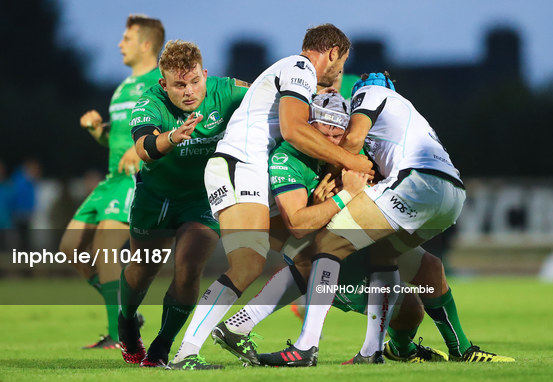 Connacht 5 Glasgow Warriors 41
by Rob Murphy at the Sportsground

A truly unmerciful wake up call is the only way to look at this six try opening day hammering for Connacht at a packed Sportsground on Saturday night. There was no surprise that Connacht smashed their record opening day attendance in the PRO12 after their glorious conclusion to the previous campaign. New jerseys and increased optimism were prevalent but after less than an hour the mood was sober and sombre.

Pat Lam, John Muldoon and everyone else in the Connacht camp will have spent the week convincing themselves and others that this was very much a blip. They’ll say this was an anomaly, a freak and harsh example of what can go wrong when you drop off your game by just a little bit. Deep down though, they’ll all be a little worried that it is a sign of something more than that.

First things first, there is solace to take from the reality that this result is highly unusual in Connacht’s history. It was the third highest defeat in the provinces history at the College Road venue, only a bizarre display in a European defeat to Pontypridd and the loss to to the All Blacks in 1989 were more severe. Even in the worst days of the mid part of the last decade, Connacht teams didn’t capitulate at home like this. This really does feel like a freak result.

Yet the performance bares some reflecting on as it went from patchy and error strewn in a first half where they trailed 13-5 by the conclusion to truly horrible after half time. While Glasgow were brilliant, back to their very best and laying down a serious opening day marker for every team in the league. Connacht looked undercooked after a one game pre season and certainly off the kind of sharpness that has underpinned the Lam era.

The blame for the lack of games in August is hard to pinpoint but Glasgow came in having played three games in three weeks, Harlequins, Gloucester and Canada A had all tested the metal of Gregor Townsend’s side. They arrived in Galway in full battle mode, determined to make amends for two of the most painful defeats in their club’s Pro12 history. The back to back losses in Galway in May.

Just remember, Glasgow were reigning champions and expecting a return to the final where it would be held in their home county for the very first time. Many of their fans had already bought tickets for Murrayfield, expectations were understandably high, the wake up call hurt and the evidence was there for all to see on Saturday evening as they tore into the team that broke their dreams with little pause for thought.

Glasgow won because they made less mistakes (and they made a few typical first day errors all the same) and were far more aggressive in all areas of the field. Their defence was intense, in the face and disciplined. They overwhelmed Connacht at the breakdown and ransacked the home lineout. That was enough but the dominant display of their half backs and a truly outstanding effort from Stuart Hogg at full back meant that all ball snatched was turned into tangible rewards.

Almost no one played well for Connacht. The front row were good in the first half. They won penalties and edged their opponents but Denis Buckley picked up a knock there that might rule him out for next week. A monumental blow if true. Tom McCartney had a part of in a key lineout that went wrong in the first half and botched an overlap in the second half but he scrummaged well as did Finlay Bealham.

Other than that, the positives were few and far between. Ultan Dillane looked off his normal top fitness. Daniel Qualter didn’t find some of the spark we saw back in spring, Nepia Fox Matamua was playing his first game in ten months and really lacked sharpness while John Muldoon and Eoin McKeon just weren’t prominent. Of the replacements, only Lewis Stevenson made a significant impact.

In the backline it was even worse, Caolin Blade and Jack Carty were outplayed, the back foot ball didn’t help of course. Bundee Aki had sparks of his brilliant best but he failed to offload to Cian Kelleher for what looked like a certain try and had the ball ripped from his hands on another occasion. Overall he was well marshalled. Eoin Griffin had few highlights, the back three had even less and both Matt Healy and Cian Kelleher had negative roles in the opening two tries.

Niyi Adeolokun was a rare bright spark in the backline. He had a first half try and two brilliant line breaks while Kieran Marmion came off the bench to add some spark to the breakdown but the positives extend no further than that. Tommy Seymour’s two first half tries had Glasgow in control. The third try came six minutes into the second half after sustained home pressure and three more followed before the end.

The issue that will rankle most with the Connacht camp this week ahead of a hugely challenging assignment at home to the Ospreys on Saturday is the fact that they didn’t even muster a late foray for a consolation score. Glasgow had 75% of territory in the second half.

In fact let’s finish on some stats, Connacht made 446 metres to Glasgow’s 543. Not bad at all and quite unusual considering the lopsided scoreline. Yet they dropped or knocked on possession 27 times in the game and thanks to a brilliant display from the likes of Jonny Gray and Rob Harley, were turned over eight times on their own ball at the breakdown. The kind of numbers that you just hope are a complete aberration. Day one, reality check.