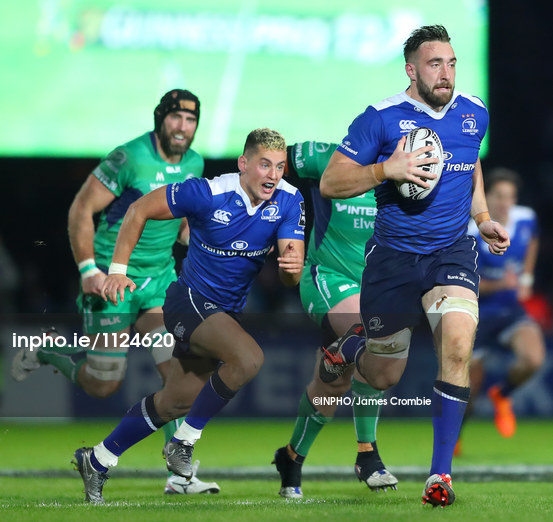 Leinster 24 Connacht 13
By Rob Murphy at the RDS

This was what might be termed an affordable reality check for Connacht. Affordable because it comes in the midst of a long season. Away points at Leinster are never an imperative in any campaign even when international call ups are hampering the eastern province but Saturday was a reality check nonetheless for Lam’s side. After all the fireworks in October, the spark went missing after just 18 minutes in Dublin.

In so many ways this contest had a very familiar feel to it. Leinster have only once ever notched a bonus point in a victory over Connacht, they always win at the RDS but the panache is rarely a feature in this contest. This was no different, the Stuart Lancaster affect is all over this new look Leinster outfit, defensively sound and supremely well organised. They are patient and explosive at just the right times.

The scrum, the dominance of the contact area and some neat set play moves were all they needed here for a thoroughly deserved eleven point victory yet their first try didn’t come until the 50 minute mark from young winger Adam Byrne after a blatant forward pass was missed by officials. Connacht were creaking at that point, Byrne’s previous play had seen him break from inside his own half on an angled run off quick lineout ball. That had them five metres out and all over the visitors.

That was the game’s decisive score but the key momentum change came in the first half with Connacht leading 6-0 and playing most of the rugby. It had been an explosive start from the visitors. All of the flash and substance that underpinned a four game winning streak, Leinster were all at sea at times and probably fortunate not to concede an early try but once Craig Ronaldson picked up a head injury, Connacht lost their shape and focus.

Bundee Aki came on but his calf injury is clearly hampering him, by half time Leinster had turned around the scoreboard to lead 9-6 despite the sin binning of Sean O’Brien and but for some poor lineout play, they might have been further ahead. That said, Connacht did finish the half pushing for a try and but for a knock on five metres out would have scored all while Peter Robb served a sin bin for a deliberate knock on.

The second half started well for Connacht but they quickly succumbed to some confident and well drilled defensive lines from a Leinster side showing ten changes from the team that lost to Montpellier a week previously and with two from the PRO12 final line up back in May. Connacht by contrast had five from that final but most of their Champions Cup line up from the previous weeks.

Leinster’s two score lead moved into the unassailable realm on 72 minutes when another young winger Barry Daly scored their second try while an impressive Shane Delahunt capped a good display from the bench with a last gasp consolation try for the disjointed visitors.

The one proviso in this tale of a drop off in form is that Connacht had chances even in the second half to turn the game on its head off the back of some high octane breaks. Bundee Aki had the first but passed when he could have taken a tackle, Cian Kelleher made the second but failed to find support inside while Tiernan O’Halloran chose to kick when a pass to Kelleher might have been on. Had even one of those attacks paid off, the balance may have shifted.

It really has been a wretched start to the PRO12 title defence. Six games in and Connacht have just two wins and ten points. They are ninth, eight points off the top six and 13 off the top four. Notwithstanding their game in hand, this is hardly a good position. The one positive to cling to is the fact that in the direct comparisons with the exact same six fixtures last year, they remain just four points off their own championship winning pace, so they’ve had a tough run of games.

They’ll cling to that in the coming weeks. The next three rounds are fixtures which all yielded a maximum return last year. The Dragons away next Friday, Cardiff at home at the end of the month and Treviso in Galway on the first Saturday in December. A 15 point return would be huge but they’d snap your hand off for three wins and even one bonus point for a 13 point haul.

Yet what Saturday highlighted was that there is a way to curtail this Connacht team’s exuberant style and if correctly executed by the opposition, there might not be an ability from Connacht to get a kicking game going in order open up space and turn the tide, or at least there wasn’t here even though they had kicked with great aplomb in the early stages. Lam spoke more of accuracy and mental errors in the post game review, he will understandably dismiss any concerns over the overall gamelan.

The young guns of Leinster will see Connacht as a beatable force now at least until they meet again in the spring while for Connacht, the injury list grows. Front row options are down to bare bones with Denis Buckley, Tom McCartney, Finlay Bealham, Ronan Loughney and Conan O’Donnell all gone while in the backs Aki, O’Halloran, Kelleher, Adeolokun and Ronaldson were all in the wars to varying degrees here. Can they recover and get through the Newport test? We’ll find out on Friday night in east Wales.