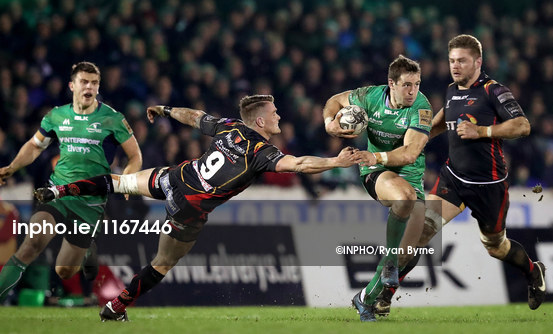 Connacht 14 Dragons 9
By Rob Murphy at the Sportsground

After a needlessly complicated performance on Saturday night Connacht really do look like a team that is overly consumed with the bigger picture and struggling with the brass tacks. Playing catchup in the PRO12 is a real nightmare and a fool’s errand too when you consider their are just eight games left in the campaign. This five point victory over a stubborn Dragons outfit was both a vital victory and a sobering reality check.

Talk of top four play offs or even automatic Champions Cup qualification is farcical at this stage. Connacht have been a lower half of the table all season, not a typical bottom six side in the sense that they make more line breaks and create more trying scoring chances than most teams but deserving of their place there all the same when you factor in a dreadfully low conversion rate for scoring chances and a misfiring lineout.

All season, this has been the case, almost every game, a mix of sparks of brilliance with inexplicably poor decision within the 22. There have certainly been some high points. Cardiff last week or the home wins over Ulster and Edinburgh but for the most part it has been a drab PRO12 campaign and a considerable step back from the glory of a little under 10 months ago.

And yet, despite all of the doom and gloom, the crowds continue to flock to the College Road venue. There seems to be a real belief that this squad of title winners are at a tricky juncture in their development but not far off from rediscovering their verve. The Toulouse frustrations will take a while to dissipate but a run of results to finish the campaign and a Champions Cup spot via the end of the seasons play offs could help turn the tide.

The news was out that Kieran Keane was likely to be announced this week long before the supporters gathered in Galway on Saturday night. The Lam era would be able to conclude without a cloud of uncertainty and there was probably still some hope that with a favourable run of fixtures in the offing, a surge up the standings might still be on the cards.

Perhaps, but the key thing to remember is there are seven automatic Champions Cup qualification positions to be filled by PRO12 sides. Four go to the best side from Ireland, Scotland, Wales and Italy regardless of their overall slot. The other three are on the league positions. Leinster, Scarlets and Ulster look to be out of reach of Connacht unless one of them has a spectacular downturn in form.

So Connacht’s first focus now has to be to hold steady in the top eight for the next three months. Develop some rhythm and zest to their game plan that has been sorely lacking in recent months. Re-integrate some of the returning players such as Bundee Aki and Eoghan Masterson for example all ensuring that by mid May, they are ready for the four team play off to secure the last Champions Cup spot.

The game itself was a conundrum, it’s narrative almost incomprehensible if one was to read through the stats alone. In most departments Connacht dominated to an extraordinary degree. With ball in hand they made 591 metres running compared with 257 from the Dragons. They had 17 clean line breaks to just two from the Dragons and at half time alone they had 15 defenders beaten to three.

Those numbers don’t even begin to explain how we got to a point where when the clock turned red at the end of the game. Connacht were scrambling to secure possession and kicking to touch relieved to have eked out a five point win after going 65 minutes without scoring a single point. Sure the Dragons hadn’t crossed Connacht’s line but they had dismantled much of the home side’s engine room by that point.

The first 15 minutes were near perfect for the home team. The opening try a two minute sustained spell of brilliant ball retention from 22 to the other. Jack Carty had two moments of pure class in the score, a crossfield kick to Niyi Adeolokun and a pass on half way to Matt Healy that is as good as you’ll see all season. Healy then made 30 metres before releasing Tiernan O’Halloran for his fourth try of the season.

The second try came on 13 minutes from Caolin Blade, again from an attack that originated deep in Connacht’s half of the field. O’Halloran’s superb line and pace took play forward 50 metres, six phases later, the 22 year old Monivea scrum half was dancing through the cover for a second try.

The line breaks and high octane rugby continued right up to half time but the errors crept in. Rather than consolidate big gains, Connacht looked for the extra pass, or as Lam alluded to afterwards, made to many 50/50 pass attempts in open play. Early in the second half, the Dragons replacement out half Angus O’Brien kicked his third penalty and from there to the end, the game was a scrap as the visiting back row got on top and their lineout dominated.

Yet by the end, Connacht had held out through grit and determination in a fairly impenetrable defence. It seems very clear at this stage that Lam’s team are struggling to come to terms with the reality of their position in the table. They’re trying to play like champions, setting the bar a little too high rather than simply playing like the bottom six side that they are and grinding their way back up the standings, step by step.

The next three months won’t be glamorous but this group of players are clearly desperate to maintain their position at Champions Cup level and to have that chance to make amends for the Toulouse disappointment in January. Their best route is a less direct, slightly slower one but if they take it, they’ll be fit and ready to meet whatever the French or English leagues throw their way by that stage.