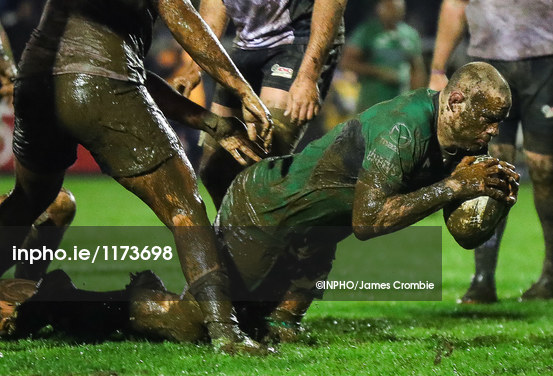 In normal run of the mill conditions, this game would have been a lot less dramatic and a lot more one sided. Instead Connacht’s five try to zero pelting of Zebre at the Sportsground on Saturday night was noteworthy for a number of reasons as the men in green overcame some of the worst conditions this venue has seen in decades to get their fourth win on the bounce.

The bonus point was only secured in the final 20 minutes. It needed an injection of power and energy from a bench, packed full of some of the squad’s most experienced and valuable assets, to dig the side out of a tricky corner with the scoreline at 12-3 and Zebre growing in belief and confidence.

Two days of incessant rain had left the College road pitch on the verge of unplayable, with Marius Mitrea’s pre match inspection garnering plenty of attention. Surface water was visible yet, the Italian referee decided that the game could start. The pressure to get a game like this played is high when you factor in travel costs for a team under financial pressure like the Parma based Zebre outfit.

This season more than ever, the Italian franchises have failed to spark with just three wins between them in 32 games played. It’s a never ending problem that just won’t go away.

While the PRO12 talks of expansion, two key stakeholders within the current 12 hover on the verge of extinction. Yet still the competition gives the best of the two a spot in the Champions Cup each year where the hammerings only increase.

Connacht started well on Saturday in front of 4,000 odd brave souls who hid in underneath the covered stands while the rain cascaded down the sides of the structures. Niyi Adeolokun had the game’s opening try after an attack from a scrum underneath the posts, where Eoghan Masterson jumped from the base and Steve Crosbie skip passed out to the right win for the winger to power over.

Former Munster man Crosbie was making his debut for the province that he joined on a short term contract in January, and delivered a solid display in the conditions. Masterson was marking a return from a 12 month absences with a knee injury and produced a powerful 60 minute effort, before receiving a huge ovation from the supporters who are delighted to have the fiery Laois operator back in the fold.

Connacht’s second try was the highlight score of the day. A quick lineout from Tiernan O’Halloran just outside the Zebre 22 after a clearance kick from the visitors sparked the score. Swift hands across the line then found Naulia Dawai, who had been lurking out on the left wing. He beat two defenders before diving over in the corner for a superb score. John Cooney’s conversion hit the post.

By half time the score was still just 12-0 despite Connacht’s dominance and the 20 minutes after half time brought cause for concern for the hosts. Having withstood the sin binning of flanker Bernabo without conceding, Zebre grew in belief. They began to put pressure on Connacht, kicking three points during the spell, and missing out on a try only after the TMO ruled the ball hadn’t been grounded properly.

As the replacements came on the momentum changed, Connacht were playing into the elements and attacking in the half of the field most affected by the muck and surface water but that didn’t deter the likes of John Muldoon and Kieran Marmion who made a big impact just after the hour mark.

Marmion’s break from his own 10 metre line turned the tide, he was tackled after gaining 35 metres and slid along in the conditions for a further ten metres. That attack was only halted with a penalty underneath the posts and while Zebre reorganised and dropped their guard, John Muldoon pounced with a quick tap and go, touching down beside the posts.

It was plain sailing from there as Connacht added two more tries, one a penalty try after a maul from a lineout was pulled down and the second from the rock solid Lewis Stevenson who powered over from close range to round off the win.

The conversion from Jack Carty marked an unusual milestone as Connacht had successful conversions in the game from four different players, Cooney, O’Halloran and Craig Ronaldson the others.

Overall, this is Connacht’s longest PRO12 winning streak of the season at four. Their bid to continue the climb up the standings will continue after a two week break with an away game in Glasgow followed by trips to Zebre and Edinburgh in consecutive weeks.

If they find their form and maintain the run with some big away wins, the Sportsground will be a much happier place come Easter Saturday when Leinster come to town for the next home in front of what is sure to be another sell out crowd. It’s too soon to say this team are building some momentum but the Glasgow fixture should be very revealing.