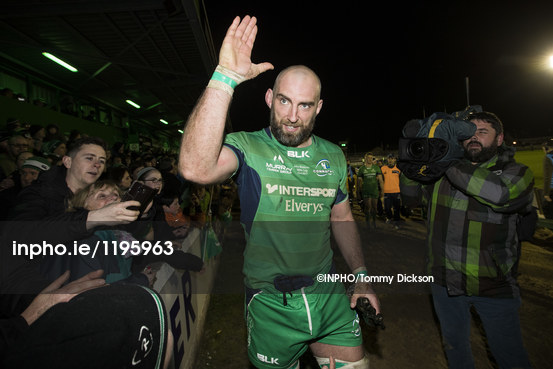 In twelve short months Leo Cullen has transformed Leinster. He might just be on the cusp of orchestrating an even bigger upsurge in form for his team than the one Pat Lam masterminded this time last year. Whatever about what lies ahead, based on Saturday’s five try win at a sold out Sportsground, Leinster supporters have a lot to be excited about right now.

Eleven front line players were left in Dublin to rest ahead of next weekend’s Champions Cup semi final in France. Despite this, the men in blue continued their incredible PRO12 run of form. With a squad of exciting young emerging stars playing rugby at a pace and with the kind of accuracy that was sorely lacking last year.

On a wonderful night of high octane rugby, the lead changed hands eight times. There were seven tries, attacks from behind the goal line and countless moments of skill and breathless excitement. This was a fine advert for the PRO12. Its hard to focus solely on the negatives from a Connacht perspective despite the fact that this was a fourth home loss of the season.

Last season’s success for Connacht was the culmination of a fascinating project spearheaded by Pat Lam. A man who knows his own potential but also recognises where he needs help. His lieutenants were then crucial in that respect. Andre Bell, Dave Ellis, Jimmy Duffy and Conor McPhillips all had key roles to play

Together, they introduced a novel game plan while simultaneously getting a level of buy-in from players and supporters like never before. It resulted in a fairy-tale story that should have provided a blueprint for what lies ahead. However, all bar one of them have decided to leave or have left already.

We’ll never know if Lam would have been capable of turning his masterpiece into a collection of triumphs. The next job is to take the profits from this and reinvest. Kieran Keane will start that next season, he’ll have a rich bed of natural resources to tap into but he’ll need to go about it a different way now. The secret door Connacht found to get into the top table has been plastered over.

Take Leinster, just 12 months ago playing second fiddle to Connacht but now a new force, re-invigorated by the addition of Stuart Lancaster to the backroom team which must of coincided a realisation from Cullen that he needed help, a la, he had areas where he was not able to deliver. The gap is all of a sudden wider than ever.

Here was a Leinster team that had every reason to be off their best, missing the stars of the European run, playing in a tricky venue against a side that had really done a number on them a year earlier. Yet they arrived at the ground in supremely focused mode and never really deviated from that until the end of the game.

A game plan similar to what we’ve seen from so many sides this season, from rounds one and two where Glasgow and Ospreys operated it, to Christmas where Munster came to town and now here again. Fast up dog leg defence that seeks to cut off the pass before Connacht can go wide, that skirts the offside line and gets away with it.

While Leinster’s first try was more down to some sweeping attacking rugby and a botched call from officials on a clear forward pass from Adam Byrne to Zane Kirchner, their second stemmed from the pressure in defence as Craig Ronaldson gifted a try to the ever impressive 22 year old Byrne who ran in from 40 metres.

Somehow Connacht fought back and Tiernan O’Halloran’s brilliant running got them on the front foot. Jack Carty executed his trademark move with a crossfield kick judged perfectly for the ever reliable Danie Poolman to finish. That had Connacht briefly ahead but by halftime Leinster were 20-19 in front, after Rory O’Loughlin’s try.

Connacht led one more time on 50 minutes. The inspired Dave Heffernan crowning a fine game with a try in the corner after a brilliant break from Kieran Marmion and a long sweeping pass from Carty. The ground was rocking at that point but from the restart, Connacht turned the ball over and while Lam and co complained about a missed knock on, Leinster scored try number four from Rhys Ruddock.

Fittingly the game ended on an intercept try from Barry Daly. Leinster had five tries and a 13 point win. Their biggest for quite some time. In fact this was a first four try bonus point against Connacht for over eleven years. Make no mistake, Leinster are a whole new team these days, so with that in mind, maybe we should just be glad that a Connacht side in limbo, showed signs of progress ahead of May. Let’s leave it at that for now.