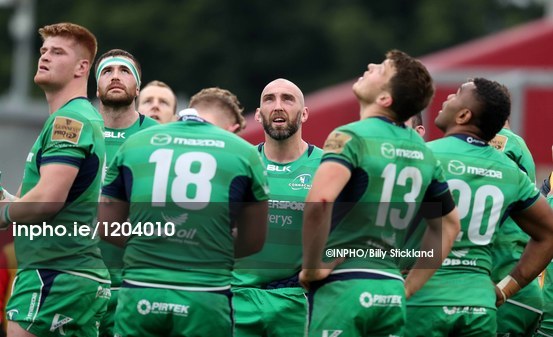 
This is and has been a bad season for Connacht rugby. That in itself is hardly cause for concern because, ask yourself, how many Connacht campaigns have actually been good since the dawn of professionalism. Three? Four?. Ok, let’s go with four. That’s four good seasons since 1997, four in 20 years.

On Saturday in Thomond Park Connacht reverted to type at the venue and actually managed to go deeper into the realm of the abysmal than any side in west of Ireland green has ever managed when playing Munster at the venue. Fifty points shipped, seven tries, this was record breakingly awful from a Connacht team that had a light touch engagement with the contest from the outset.

Four good seasons, let’s give you the first example. The 1997/1998 campaign under Warren Gatland, the second greatest Connacht coach of all time, a trail blazer. Everything you see today would not be possible without that campaign of outrageous bravery where Connacht won in Bordeaux and Northampton on their way to a heroic last eight exit in the Challenge Cup.

That 1997 team was marked by stern defiance, a firm bond and a collective will to achieve the unthinkable, to look out for one another, to ensure no try was conceded without, at the very least, hands been put on players, tackles been attempted, bodies been put on the line. There was none of that on show in the Keith Earls try that kick started this game. Dan Goggin glided through a gap untouched before setting up the Moyross native.

For a second example, let’s go with the inaugural Celtic League season in 2001 when Connacht had assembled a truly brilliant group of players and took the competition by storm winning in Cardiff, Newport and Bridgend on their way to a quarter final defeat to Glasgow under the guidance of Steph Nel.

That Connacht team were adept at grinding out results. Turning good set piece play into long periods of sustained pressure. It merely took two Eric Elwood penalties to win that game in Cardiff. This Connacht team play a very different brand of rugby but when the collective effort is off. When the work rate isn’t there. When the attitude is wrong, the errors can be extremely costly.

The spell just before half time where Connacht shipped 17 points in just under 10 minutes to go 24-0 at the break underlined as much. Sloppy turnovers, miss matches in defence and a real sense of doom enveloped the side as defenders didn’t trust their inside men and overlaps were easily created by a rampant Munster.

The third example of a good season can be traced back to the 2002/03 campaign, Michael Bradley’s first in charge where the side finished seventh in the Celtic League and stormed to a European semi final where Harlequins pipped them. That side were underpinned by a steely focus and commitment to the basics because of the likes of Michael Swift and others.

They certainly wouldn’t let restarts bounce in their 22 to start a second half where pride was at stake. On Saturday, with humiliation on the cards, Connacht did exactly that and that botched restart paved the way from James Cronin to get Munster’s fourth try. Connacht responded with a couple of decent scores, one from Cian Kelleher, the other from Naulia Dawai but it was only a brief moment of noise from their huge travelling support.

This team is the bulk of the squad from Connacht’s fourth good season, the season of all seasons just one year ago. They are a pale shadow of their former selves at the moment and they appear in disarray as the 2016/17 season comes to a close, one abysmal performance after another from Zebre away, to Leinster at home followed by Scarlets at home and onwards to this stinker in Limerick on a perfect Saturday evening.

Chaotic preparation played a part in the opening month of awful results but they steadied the ship for the autumn/winter segment and raised a brief gallop in the Champions Cup too. It wasn’t all bad.

The Pat Lam departure and the timing there of is all anyone can point to right now. There was nothing that could be done by any party there once the contract was in place. This was just bad timing, bad luck too but ever since, the manner in which the wheels have come off has been mesmerising. It’s hard to look away as this team of champions loses all sense of composure and appears to be disinterested in their work.

And yet, having said all that. Despite this record breaking loss in Limerick. Connacht still have one more game to come in a little over a week’s time, perhaps even two. Win both of them and they’re back in the Champions Cup. All won’t be redeemed, this won’t be crowned a good season but it sure as hell won’t be a bad one.

Lam’s ability to lift them appears to be waning. The players are lacking key components with Tom McCartney and Ultan Dillane out injured and Bundee Aki having one more game of his suspension to serve (pending a last gasp appeal). They are all leaders of one sort or another, either by actions or words. They also provide the current crop with plenty more reason to give up and ship one more big score defeat before it’s all done.

Yet one thing underpins the vast majority of the 16 odd seasons that weren’t good in the last two decades. They were seasons were Connacht didn’t give up the fight. During Eric Elwood’s time in charge, Connacht might not have reached great heights but they set a bar for commitment and effort. That was then raised once Lam took over in 2014 but for the first time since 2011. That bottom line is under threat. Connacht’s effort was sub par last Saturday and they were hammered as a result. What’s next?