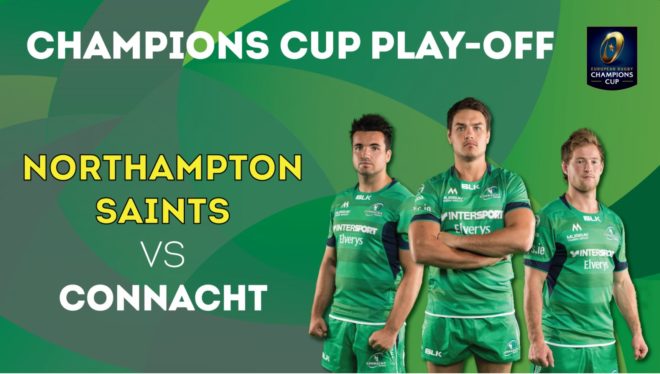 Four teams are vying for the twentieth and final spot in next season’s Champions Cup in these perplexing, and seemingly needless qualifiers, over the next two weeks. While Connacht and Northampton lock horns in middle England (geographically speaking), over in Paris on Friday night, Stade Francais and Cardiff meet in the other semi final.

This really is a daft format that needs a serious rethink. Out of the the four teams left, Stade Francais are the side that are worth a place in next season’s Champions Cup, as they won the Challenge Cup last weekend. That should be that really. Northampton have spent huge money and couldn’t even finish in the top half of their league. Cardiff are celebrating are hailing their seventh place finish as huge progress, hardly a good benchmark for such a huge rugby city.

Then again, when EPCR gives Italy a guaranteed spot in the competition (secured by Treviso after piping Zebre to second last in the PRO12) it will be hard to give grief to any of the three sides not from Paris, if they manage to win two games over the next couple of weeks.

A simple format would be top six in every country along with the Challenge and Champions Cup winners or another side from the league of the winners. That said, it is what it is and if Connacht do manage to upset the odds and win in England this weekend. They will have a home game at the Sportsground on Friday May 26th with a chance to secure their own place in the elite competition for a second successive season.

That scenario seems like a long shot. Pat Lam would love nothing more than to leave Galway on a major high by rescuing this otherwise wretched second half of the campaign with two wins that will live long in the annals. Problem is, his side have no form whatsoever. Three months of fairly pitiful displays and only a couple of soft wins over Edinburgh away and Zebre at home.

Embarrassing defeats at the hands of Munster, the Scarlets and Zebre still linger in the mind. Decent displays but comprehensive defeats to Glasgow and Leinster are also on the mind. The injury crisis has loomed large and key men like Tom McCartney and Quinn Roux are still unavailable. Bundee Aki’s unchecked temper has him sidelined too.

The news was better this week for others Ultan Dillane, Matt Healy, Niyi Adeolokun and Steve Crosbie are all back training. However, a lack of game time is an issue for the quartet, so don’t expect them all to start. In the doubtful bracket, place Marnitz Boshoff (head injury), Andrew Browne (calf) and Tom Farrell (groin). So overall it could be better news for Lam and co.

For the moment at least, if none of the players listed above make it to the starting lineup after fitness tests this week, Connacht are set to start Saturday’s game with only seven of the line up that took to the field in the PRO12 final just under 12 months ago. Of the other eight, Robbie Henshaw, Aly Muldowney and Aj MacGinty are gone, McCartney and Aki are ruled out, while Dillane, Healy and Adeolokun are on the maybe list.

So let’s recap. Connacht have arrived in these qualifiers almost in spite of themselves and with no momentum whatsoever. Yet their injury crisis is easing and the potential to transform the narrative right at the end of a disappointing campaign must be enticing. So why are they such underdogs?

Well, to start with, England has been a wasteland for Connacht over the last 20 years. In fact, go all the way back to 1997 when Warren Gatland’s side stunned Northampton in Franklin’s Gardens and move forward from there. They’ve won just once in England in the two decades since. That was a fairly fortunate one point win at a Worcester side on the verge of relegation in 2009.

Other than that, it’s been defeat after defeat. Three in Newcastle, three at Harlequins, a couple in Exeter and Saracens, and defeats away to the likes of Sale, Bath and Wasps too. There have been three visits to Gloucester as well. Despite some stirring displays including an extra time Champions Cup qualifier defeat two seasons ago, no win.

That performance in Gloucester in the last qualifier of this type could be the cause for some optimism. But Connacht had all the firepower and a large dollop of unpredictability about them then. Matt Healy is unlikely to be as in tune this weekend for example. There’s also a drop off in centre partnerships as it was Aki and Henshaw in midfield that day.

And yet, Connacht supporters are travelling in big numbers on Saturday full of hope and shunning any of the negativity. Last season was far too glorious to allow one patchy campaign ruin their fun. They will also believe that this group of players have a spark in them. A kick at the end of the season. A reaction to the utter humiliation bestowed on them in Thomond Park last time out.

The days since that early May defeat must have been interesting. Lam has surely made one last impassioned plea to his group for a unity of purpose. A focus and a return to the heart on sleeve, high tempo game plan of the previous years in his regime. An error free game could well stun their opponents.

Let’s keep the positive thoughts going, Northampton are no Munster. They are a mid ranked English side that lost more games than they won this year. Connacht had Wasps on the ropes in Coventry back in December and beat them in the Sportsground. The likes of Courtney Lawes, Louis Picamoles and George North are big names for the Saints but Wasps had the stars too.

It would be unwise to get the hopes up a whole lot more but don’t rule out the unthinkable. The Lam era has had its low points in recent weeks but overall it has been a four year term of unthinkable highs. Before last season, there were one off performances that left opponents stunned and produced ground breaking results away to the likes of Toulouse and Munster for example.

Northampton will look to dominate with power and set piece superiority before unleashing their backline. They will have done some homework on Connacht but recent video footage will only lull them into a false sense of security. So they would be wise to simply focus on their own game. If they do, they’ll have enough in a tight contest. If they complicate things and lack the ability to improvise under pressure, there just might be one more special result in Lam’s Connacht.