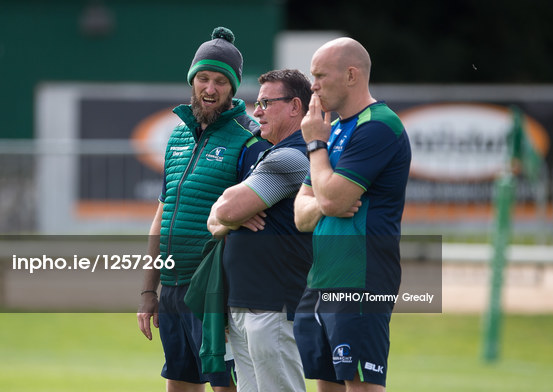 A mouth-watering and historic first Guinness PRO14 fixture between Connacht and South African side Southern Kings takes place at the Sportsground on Saturday (7.35pm ).

It is a first visit to Ireland of the Port Elizabeth-based outfit in the new competition. And the first cross-conference fixture for both teams this season.

Having suffered opening day defeats, both sides will be determined to make amends in front of an expected full house at the Sportsground.

Connacht, having disappointed against Glasgow, losing 18-12 in miserable conditions at the Sportsground last weekend, need to make home advantage count.

New coach Kieran Keane says he will be “disappointed” if Connacht fail to turn things around on Saturday, having had both “philosophical and other discussions” about last weekend’s performance.

“We didn’t score enough points in that first half. We missed three serious opportunities to score tries, one of which you would argue was scored anyway. So there were enough points gathered with the wind. We have reflected on that, and the means and mechanisms to make those things happen. On the day for whatever reasons, we just choked.”

Keane says Connacht lost their way by forgetting the structures of their attacking play.

“We are giving players responsibility and opportunity. But unfortunately on this day the structure of our attacking game went out the window.”

That, says Keane, is what the squad calls “MSU”.

“You won’t get an answer what that stands for, but we had a lot of MSU going on. We never recovered from that. What we practised for three weeks went out the window and MSU took over.”

The Kings lost their opening day fixture to the Scarlets by 57-10. But Keane believes if Connacht are “not on song”, it could be a tough evening.

“I have no doubt they will be up for it, hurting after their first game. They are a very physical side, have a lot of physical prowess in their front eight and back seven, so they are fairly expansive, quite brutal.

“They bring a lot of threats, they love to play and love to give the ball a bit of air, so I imagine if we are not on song, things could be turned around by them quite quickly, but of course, we want to turn things around too, big time.”

“People will be excited because they will really enjoy their style. They are extremely quick, have athletes all over the park, and it will be exciting for people to see them. They bring a great brand of rugby, a joie de vivre.”

Keane still has some injury worries.

Prop Finlay Bealham is the latest to join the list and is undergoing return to play protocols for a head injury.

Still absent is fullback Tiernan O’Halloran, who has returned to training after knee surgery – “structurally fine, and we will put a bit more pressure on his joints and see how he comes through”.

Lock Andrew Browne is expected to be out for a “number of weeks” with an Achilles tendon injury. While centre Peter Robb is sidelined until December following surgery on his hip.

The South African visitors have had little time to prepare, having been “thrown” into the competition, but they have already sampled Irish culture, arriving on Sunday evening amid Galway ‘s hurling celebrations.

“We got here Sunday night, got stuck in hurling traffic and it took out another two hours for us, but it was awesome to see. We had a pitstop at a dining stop and talked to some of the Galway fans – a good experience, it was amazing,” says prop Schalk Ferreira.

Assistant coach Barend Pieterse, says this first year in the PRO14 will be a learning experience, “but come next year, we want to compete and get into the play-offs, that is our long term [goal].”

That is also Connacht’s goal, and an improvement is needed after last weekend’s performance.