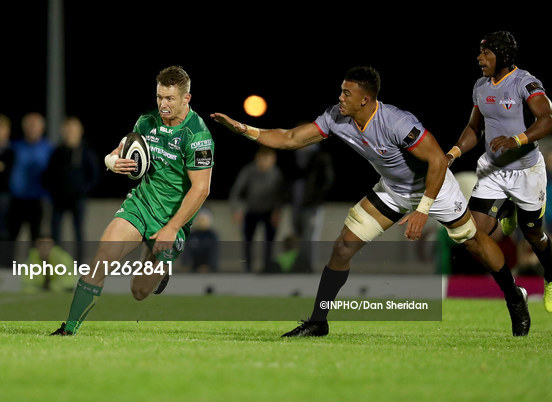 The result was expected and it was delivered with relatively little fuss on Saturday.

The new South African sides are not ready for this competition and might not be ready for half a season. They are a disjointed but not entirely bereft of attacking talent, so will at least entertain on their travels.

The action lulled considerably in the second half. And for that reason the scoreline probably flatters to deceive. By the time Ultan Dillane was bundled over for his first Connacht try right on half time, the lead was 24-5 and all doubt had been erased.

There’s no point trying to ascertain if this was an overall team improvement on the Glasgow performance. It is difficult to judge considering the quality of opponent.

Yet there are lots of little encouraging nuggets that were observed here that would suggest this campaign has the potential to take flight in the coming months.

As a starting point, take the emerging talent factor. There are signs of a refresh within the camp and some new names emerging from the fringes.

Darragh Leader, Tom Farrell and Steve Crosbie in particular stood out here. Hardly a radical infusion, but all three are worth watching in the coming weeks as Connacht look to regain a foothold after the day one stumble.

Leader in particular stood out on the wing. It seems a more suitable role for him. He has an extraordinary range with his boot and it’s a real weapon in open play and from penalties.

That’s just for starters. His pace is impressive. He’s strong and agile, and this was best illustrated for his second half try that sealed the bonus point.

The 24 year old has been held back by injury but appears to be back and flying. It’s notable that Kieran Keane had Darragh beside him in the post game press conference. That is unlikely to be a random selection. You can be sure that the new head coach was taken by the performance here.

Bundee Aki picked up the TV man of the match, and if you take this game in isolation that was a fair call.

He made the key hits at just the right times to turn the tide but this was never going to be much of a contest with or without Connacht’s star man.

The main positive from his angle is the simple reality that he looks hungry and nearing his best heading with a crucial couple of months ahead.

Tom Farrell started this week after making a good impact in round one. He didn’t disappoint, with a strong display and a first ever try for the province early in the contest.

The former Irish under 21 joined midway through last season and has more than earned his keep. Same goes for former Old Belvedere out half Steve Crosbie, who added a late spark at ten here and, made his own case for more inclusion.

The forwards have a familiar look but no less zest to them.

Losing Sean O’Brien to injury early is certainly a worry. But Eoghan Masterson replaced him, and gave us another neat nugget of hope with a powerful and noteworthy display throughout. After a long injury, he appears to be back and he even popped up with a try too.

So that’s it. Farrell, Masterson and then Dillane had tries in the first half.

The Southern Kings offered very little defensive resistance, but still managed one sweeping eleven phase attack during the first half that led to a try from centre Berton Klaasen and showcased some of the raw talent they will bring to the competition.

That said, this Kings team is made up of fringe stars with no South African internationals.

They will take a while to adjust to the pitch and physicality of the PRO14 but even when they do adjust, they will be found wanting if they don’t improve their talent pool.

Everyone is ready to give them plenty of time and they were gracious in defeat and upbeat about what is to come.

Connacht have less time to play with in their bid to be a play off contender this season.

The Dragons are next up in Newport on Friday night, another winnable fixture. It will feel like a Cup final as the hosts.

Coached by former Connacht player Bernard Jackman, they will also be targeting the fixture in the must win bracket.

Even at this very early stage, Glasgow and Munster are emerging as the likely top two in Connacht’s conference.

The Ospreys however look like they have some issues and are hardly setting the world alight. While Cardiff, the Cheetahs and Zebre are all chasing a first win.

That augurs well for Keane’s side but wins over the Dragons and then Cardiff before the month is done are a must.

There are still plenty of areas for concern in that regard.

The lineout might not stand up to heavy scrutiny. A disjointed Kings were able to carve numerous line breaks.

And discipline was an issue here. Finlay Bealham saw yellow for a needless shoulder charge, and John Muldoon was lucky only to see yellow for leading with the shoulder at the side of a ruck late on.

So Kieran Keane cut a more content figure on Saturday evening and will be positively beaming if they get over Friday’s litmus test in Wales.

The disjointed effort against Glasgow still lingers in the rear view mirror, it can be erased from the minds with even the scrappiest of one point victories, another big early season test awaits.