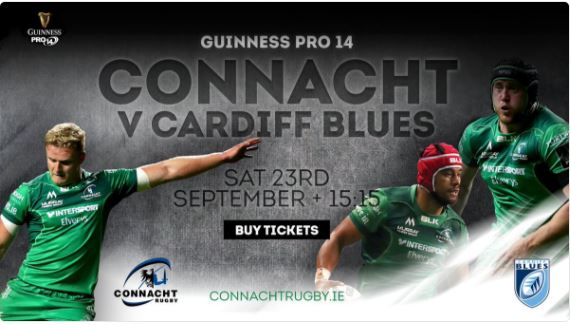 Pressure mounts on Connacht Rugby to deliver a winning performance when Cardiff Blues arrive at the Galway Sportsground on Saturday (3.15pm ).

Cardiff, without a win this season, will take heart from fellow Welsh outfit Dragons, whose fighting performance saw them romp to victory over Kieran Keane’s side last weekend. Connacht’s second successive loss at Rodney Parade.

However this week Connacht forwards coach Jimmy Duffy says Connacht are in a better place having completed the review of that 21-8 defeat to Bernard Jackman’s side.

“We are in a better space now we have done the review and looked at the opportunities we created. We’ve spent quite a lot of time looking at areas we need to improve,” Duffy says.

“We were all disappointed with how we started. We identified a couple of areas we needed to add energy, and definitely the guys who came off the bench added that bit of spark which is the reaction we looked for.

“It was disappointing, but the positive is we addressed it, spoke about it, and implemented it after half time.”

Connacht only scored one try in the second 40 minutes despite dominating possession, but Duffy says it will take time.

“Try scoring would be a problem for us if we were not in a position to create opportunities. We had multiple chances which we could have taken advantage., So what we have been doing this week is addressing how to capitalise when we create them.”

“Everything takes time. It’s not Kieran’s [Keane] game plan. It’s a collaborative effort, with players as well. There is a lot of experience in the coaching group and we are still finding stuff out about each other.We are pretty happy as a group, enjoying what we are doing, and hopefully we’ll see that in the next couple of weeks.”

Saturday’s Sportsground visitors suffered a third defeat when going down 19-20 to Glasgow last weekend after outhalf Steve Shingler missed a winning penalty, and Duffy is expecting another tight affair.

“Every time we have played them, the game has been in the balance. They’ve always been very close contests.

“They have quality players, are well coached, and we know they are going to be difficult. They always pose a number of questions of you with their quality of their attack, and likewise their defence. We are keenly aware they are quality opposition.”

Connacht have one fresh concern with fullback Tiernan O’Halloran being “monitored” this week for a hip injury, and his experience will be crucial with both Matt Healy (groin ) and Niyi Adeolokun (knee surgery ) still sidelined.

Duffy confirmed former Ireland U20 flanker Sean O’Brien will be out for up to three months having undergone surgery for the shoulder injury he suffered against the Southern Kings.

And fellow back row player Naulia Dawai had a “minor setback” with his hamstring and is continuing rehabilitation.

Lock Andrew Browne still has a number of weeks on the sidelines with an Achilles injury, but a glimmer of hope is the impending return to fitness of scrumhalf James Mitchell.

The former Sale player, who has yet to make an appearance for Connacht, hopes to return to training in the “coming weeks”.