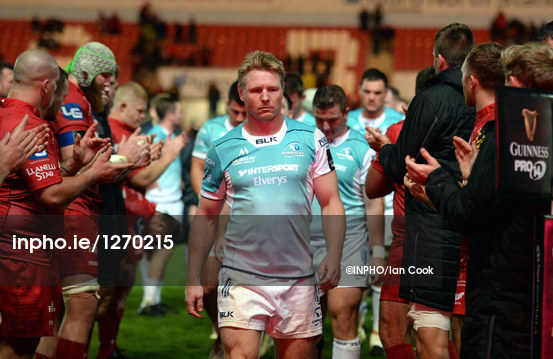 It never takes much to soften the mood around the Connacht rugby team.

No one is asking for silverware every season or even any specific ratio of wins to losses, but the first four rounds of the season underlined to the players that there are depths that will be deemed unacceptable by supporters and management alike.

For this reason, Friday’s thrilling encounter in west Wales has lifted spirits, despite the fact that the nine point defeat was Connacht’s fourth loss in five outings.

The performance was key here. The westerners trailed by as much as nine points in the first half, and rallied superbly to lead by three just before half time, before giving as good as they got throughout a frantic second half.

Not one person inside or outside the camp was more downbeat and critical than Connacht coach Kieran Keane after last week’s defeat to Cardiff.

On Friday, in the tunnel, he cut a calmer, more satisfied figure. This might well be the game where he finally saw what he was looking for from his side. This might be the point where a corner was turned.

The Scarlets came in as unbackable favourites. They were in great form and fielded star studded line up, especially in the backline.

As early as the eighth minute, they had demonstrated their prowess in the centre with British and Irish Lion Jonathan Davies bursting through tackles in the centre on the way to setting up New Zealander Johnny McNicholl. The sense of gloom seemed set to continue for the men from the west.

Perhaps the most important score of the game for Connacht followed that as they answered that blow right from the kick off.

On the first phase after the Scarlets gathered, Bundee Aki pushed up in the line and forced a loose pass that Jack Carty ran onto. He put boot to ball and the bounce favoured him, as he went in under the post for the visitors first try.

Still though, by the 24th minute of the half, the Scarlets were 19-10 ahead and seemingly in total control having notched three tries. Winger Steff Evans was at the heart of everything good they did with some wonderful footwork for their second try and good support play for Rhys Patchell’s score.


The response from Connacht before half time turned the tide, stunned the crowd and will certainly go down as a line in the sand moment should Keane’s men rebound from their slow start to the campaign and become a serious player in the play-off race.

Tiernan O’Halloran got the second try after Jarred Butler’s well time pass released the electric Tom Farrell who made big yards and set up his winger.

The third try was equally as eye catching with Cian Kelleher finishing in the corner after plenty of good carries on a sweeping move including one from Eoin McKeon.

That score had Connacht 22-19 ahead with just two minutes to go until half time but a Bundee Aki turnover led to one last Scarlets’ attack before the break and full back Leigh Halfpenny had the try.

The second half was tight and tense.

The Scarlets held a four point lead for most of the third quarter and extended that through the boot of Halfpenny. But when Eoin McKeon burst through the cover and offloaded to O’Halloran, who went over for a Connacht try, the opportunity to level the match was at the feet of Jack Carty.

The out half had played well throughout but his conversion tailed just wide.

Minutes later Tadgh Beirne crashed over for the home side to rob Connacht of a losing bonus point.

The four try bonus was a consolation but it a draw or even a bonus point victory seemed possible after O’Halloran’s second try.

How did Connacht go from losing to a Cardiff side that are in disarray to playing a key part in a barnstorming tussle with one of the best side’s in the competition.

One where they ended up making more metres with ball in hand (524 as against 357 from the hosts) and edging possession and territory stats.

While it’s hard to measure, attitude played a key role.

Connacht had been averaging a yellow card a game before Friday. They had been dealing with high penalty counts too.

But beyond that, the nature of those penalties had been alarming. Ill judged petulance was becoming a regular sight. All that was gone here and frustrations were kept in check.

The move of O’Halloran to the wing seemed to work too, as he had a huge impact on the contest. So too did Farrell, who appears best suited to the 12 shirt alongside Aki.

Carty played well at ten, while in the back row Jake Heenan, Butler and in particular McKeon all performed superbly well and seemed to edge their opponent.

When the chips are down you take every positive sign that comes your way.

In what was arguably their most daunting fixture on the 21 game season, Connacht produced by far their best display of the campaign so far.

If they can pack up this performance with a similar effort in Ravenhill this Friday, there will be a lot more optimism around the season ahead. Their coach seems to think so anyways.