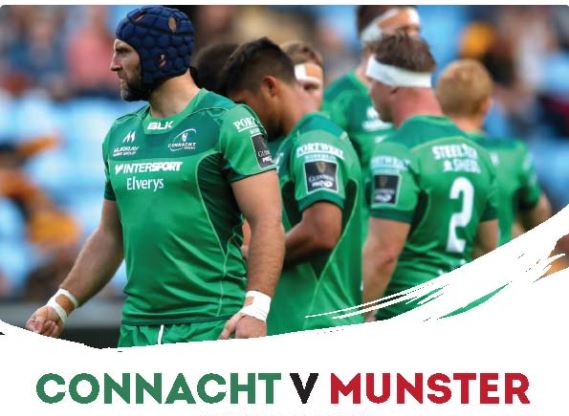 Top guns for both Connacht and Munster are expected to be in action in the first of this season’s interprovincials at the Galway Sportsground tomorrow evening.

The timing of this much anticipated clash, coming ahead of the forthcoming Guinness Series of autumn internationals, is adding an extra dimension as players try to stake a claim in Joe Schmidt’s Ireland squad.

While it is all about winning for both sides, Connacht coach Kieran Keane says that tomorrow’s match is a perfect opportunity for all the players who want to play for Ireland.

“It is a great thing because everyone is trying to get a green shirt, and this is the forum in which they can shine,” he says. “It brings out the best in everyone as far as I am concerned.”

Keane is certainly hoping Connacht rise to Munster’s challenge in this first home interpro which is expected to attract the first capacity crowd this season.

“I thikn you will see a lot of excitement about the fixture. It has become pretty clear to me these local derbies are really important to the players, so they are putting their hands up because they really want to play, so it brings excitement – I am excited by the occasion as much as they are.”

Several Connacht contenders could be in action at some stage in the three match series, including fullback Tiernan O’Halloran, who was replaced in last weekend’s victory over Worcester as a “precaution” having returned fro a hip pointer.

And with Bundee Aki, Ultan Dillane, Kieran Marmion, Finlay Bealham, Quinn Roux, and Tom McCartney, who qualifies next month, Keane says there are a number of players who could be selected.

“We have a number of players who are in line, but it’s Joe’s ship and he plays things close to his chest as I think he should. The nice thing is that everyone should be in consideration. We are one of four provinces, and everyone I am sure has an opportunity, but you won’t get picked on one or two games.”

Despite the dampner of Simon Zebo’s planned move to France, Munster arrive in Galway in high spirits, having seen off Racing 92 in a tough Champions Cup encounter last weekend.

And although Connacht have yet to play to their full pontential, captain John Muldoon expects another close game – despite last season’s out of character 50-14 loss in Thomond Park.

“Yeah, I think it was 50 points in Thomond, after a long season, and obviously it was very difficult to lose to them in that manner, but these games are traditionally tight games. Even a few seasons back I think we gave them a 14-point lead and then came back to score three tries to go in at half time winning, so it promises to be a tight game.”

However it was last season’s home defeat in the Sportsground that still irks Muldoon – a game which has been highlighted this week.

“It still bugs me. You have a blatant penalty try and the ref doesn’t see it, and they kick the ball 90m down the park, and they get a try which is truck and trailer. Let’s not give out about referees, but on a wet night in the middle of December if you get a call one side and not the other, it’s game over.
Generally in those conditions one try wins it, and it is frustrating, and the fact that we looked at it again yesterday, makes it even more frustrating.”

Connacht is counting the cost of last weekend’s fixtures with another five players joining the growing list of injured.

Openside James Connolly (high ankle strain) and Dominic Robertson-McCoy (thumb) are sidelined for several weeks, while there is a big question mark over centre Eoin Griffin whose calf injury is being monitored this week.

Prop JP Cooney(ankle),and centre Stacey Ili (shoulder), were both forced off in what Keane describes as an “embarrassing” Eagles 14-71 defeat to Ealing Trailfinders on Sunday.