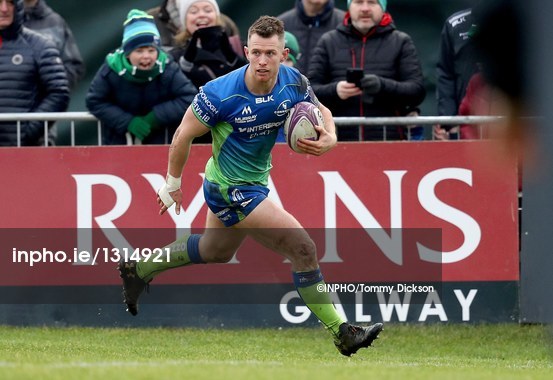 The Challenge Cup only really gets going in the knockout stages.
Connacht secured their spot there with the draw in Worcester in round five. So on Saturday they just needed a simple win over Oyonnax to ensure a home quarter final.

The objective was achieved with plenty to spare against an abject and entirely disinterested Oyonnax side that had decided way back in October that this tournament wasn’t for them.

The competition can produce some forgettable games at times. This was another.
Yet it invariably is worth sticking with as it always seems to come to boil in the spring with some nail biting knockout contests.

Think back two years to that wonderful quarter final encounter away to Grenoble or some great semi finals down through history at the Sportsground against the likes of Toulon in 2010 and Harlequins way back in 2004.

So Saturday’s game was what it was.
A formality in terms of outcome and a tricky test in terms of professionalism and remaining injury free.

The respective early departures of Craig Ronaldson, Conor Carey and Niyi Adeolokun could prove costly but as an attacking force, Connacht were a different class in the first half.
They didn’t let the abject effort from their visitors put them off their usual speed and creativity and scored at will in the early stages.

Niyi Adeolokun had tries on 19 seconds and three minutes. Bundee Aki waltzed in behind the defence after a Kieran Marmion dink through.

Sure, Oyonnax mustered a couple of tries for their own good before the break from full back Axel Muller and Daniel Ikpefan. But Connacht were not finished and by half time they had added three more including Adeolokun’s hat trick. One from Tiernan O’Halloran. And a try from Matt Healy that brought him level with Fionn Carr at 42 on the all time Connacht scorer list.

It was a cakewalk, which makes the second half effort a bit of a head scratcher.

Connacht spent 27 minutes after half time in total control in terms of possession and territory. But they were struggling to find another try up until the point where replacement Tom Farrell finally broke through the stubborn defence.
A penalty try in the final ten minutes concluded the scoring. The margin really didn’t matter though, the win was all that was needed.

The disjointed nature of the contest probably prevented any player from reaching their best but even in this environment there were some eye catching displays.

Eoin Griffin was a live wire and determined in defence making some key tackles throughout.
Up front Ultan Dillane again stood out with a massive 15 tackles for a team that didn’t have all that much defending to do. And Caolin Blade again showed his prowess making a telling impact from the bench for a second week running

The season becomes a little less fluid and a little more disjointed for the men in green over the next three months.
They are on a two week break before returning on February 9th for the first of two home PRO14 games that could prove pivotal in the race for fourth and automatic Champions Cup qualification.
Ospreys are up first, then Zebre with Aki, Dillane, Marmion and Quinn Roux all balancing Ireland commitments.

The team then faces some tricky logistical challenges with journeys to Treviso and Bloemfontein in South Africa on the cards in the following two weeks before another two week break.
Then it’s all go from there to the end of the season with Edinburgh visiting Galway first before fourth ranked English side Gloucester arrive in the Sportsground on Easter weekend.

With that quarter final in mind, Connacht have slipped from second favourites before round five to third favourites off the back of a poor finish to the game in Worcester. The failure to convert on a multitude of opportunities late on in that contest has cost Connacht a much more favourable quarter opponent in the shape of Brive and the chance of a home semi final for good measure.
Now it’s high flying English Premiership side and if they win that, a likely trip to Newcastle.

Route to the final

The route to the final in Bilbao on Friday May 11 is a lot more complicated than it ever needed to be. Kieran Keane can look back at a first ever unbeaten run in the pool stages of a European competition with a fair degree of satisfaction. The opposition might not have mustered a whole lot, although Worcester certainly raised their efforts in both fixtures, but the ruthless endeavour over the six games paid off handsomely in the end.

The Challenge Cup rarely offers much in terms of drama during the winter months, but come spring it can throw up a thrilling knockout competition.
Pau from the south of France are targeting a final at a venue very close to them to showcase their growth of their club.
Stade Francais can’t be ruled out either.
Edinburgh and Cardiff will prove promising outsiders and Newcastle are very much in the mix too.
Roll on Easter.