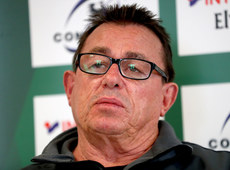 Kieran Keane, regarded as a “perfect fit” for Connacht at the time of his appointment, is now regarded as an imperfect match just nine months into this stint as head coach.

News of his release from a three year contract came within hours of Monday’s meeting with CEO Willie Ruane – some 36 hours after Keane was celebrating with his coaching team and players in a Galway city pub after an end-of-season hammering of Leinster at the Sportsground.

The celebrations masked what some of those around him may well have known, for it is believed the decision had been made some weeks, even months earlier, in consultation with key personnel. But it came as a shock to Kieran Keane, the coach who believed he would deliver Champions Cup rugby and a Pro 14 trophy before the end of his three year contract.

Just hours earlier he had spoken positively of building on his first season in charge, to bring about the consistency that was responsible for 14 defeats – six by less than a score, not to be caught with pants down having missed the previous pre-season due to obligations with the Chiefs in New Zealand, and to review the existing coaching set-up…

He spoke like a coach who had found greater clarity in his own mind of what was needed after a testing first season in charge. Confident, enthusiastic, and in control, he was certainly delighted Connacht had delivered for their captain John Muldoon in his final game after 17 years.

His respect for Muldoon and his squad was beyond doubt – on several occasions he was emotional when speaking of his “love” for his players and their efforts to grow and deliver winning rugby. And therein lies the rub.

Kieran Keane was all about his team, his players, the desire to improve and to play winning rugby. It was his number one priority. The former All Black would tell you he lives for the game he has loved for 64 years – some 30 of those coaching, from national underage in NZ to assistant with the Chiefs. Turn the team into a success first, just as he had done when he transformed the Tasman Makos into a winning side. But Tasman is not Connacht, Ireland is not New Zealand, and we hear it was not results on the pitch that mattered to Connacht officials. It appears he simply did not fit.

Too dry for the west of Ireland

His apparent inability to follow Pat Lam’s lead and sell Connacht Rugby to the masses off the field – to engage with supporters and the wider community – was a failing. If that was Keane’s brief, he got it wrong; but Connacht also got it wrong because he was not that type of coach.

Keane was no Pat Lam, Mark 11. The popular Lam, who had spent several years playing in England, arrived in Connacht determined not to make the same mistakes having been sacked in Auckland. He carefully selected his management team, brought with him key personnel whom he could trust, and set about introducing novel ways to build his team on and off the pitch. Lam, supremely confident, was a media dream, would answer any question, discuss at length his vision and ambitions.

Fast forward to this season, and Keane, having spent the previous three seasons as an assistant to Dave Rennie at the Chiefs, was forced to play catch-up, having arrived late into an already-formed coaching set-up. He shunned the limelight, rotated media interviews with his coaching team, and was a no-nonsense talker who did not suffer fools, honest to a fault, with a dry sense of humour. His image suffered after a first tetchy television interview with Graham Simmons when asked if he was “ticking”, but local journalists who spent more time with Keane will attest to an intelligent, engaging and humorous individual who was growing into the role.

However, he did not grow fast enough for those in charge. If results had gone Connacht’s way, Keane might or might not still be in situ. It would certainly have been more difficult to part company, particularly had Connacht beaten Gloucester when they met in the Challenge Cup quarter-final. It appears after losing that encounter, the writing on the wall was magnified, and not even an outstanding 47-10 victory over Leinster – the first season Connacht had beaten all three provinces at home – could convince those in charge that he deserved a second season.

In a results-driven business, Keane had performed on par with others in their first year, but it was not enough for Connacht.

Yesterday the organisation still had not issued a formal announcement with protracted negotiations continuing on Keane’s release conditions. However, Connacht are expected to move swiftly to appoint a replacement, and if it comes from within, former Ireland U20 coach Nigel Carolan is the favourite.

Carolan, who steered the Ireland U20s to the Junior World Championship final two years ago, and worked as Connacht’s academy manager for several years, was brought into the professional set up this season by CEO Willie Ruane as an assistant coach. Carolan was regarded as a head coach in-waiting to Keane after the New Zealander’s three year contract had expired. It may be unexpectedly early, but Connacht may well hand the former Bish pupil the reins.