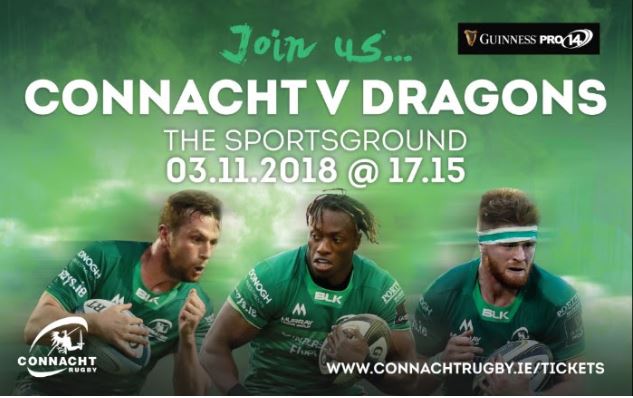 Connacht coach Andy Friend is prepared to “roll the dice” in his selections this week ahead of the Dragons’ visit the the Sportsground on Saturday.

After last weekend’s disappointing five-point defeat to an Ospreys’ side shorn of its current internationals, Friend says changes will be made to his squad.

“We need a mountain of energy and a really good performance [against Dragons], so there’s a fair chance we will make adjustments.

“One of the things we talk about is rewarding good performances, but if the players don’t give us that energy, there’s a fair chance they won’t be playing the next game. We do roll the dice with that too, but I believe in being firm with it. There’s no point saying it, and not doing it, so in having some adjustments it gives others opportunities, and allows us to keep everyone honest.”

Friend believes the players had expected to win given the Ospreys’ selection, but such assumptions will not be repeated against Bernard Jackmen’s visiting Dragons, despite having lost five of their seven outings to date and jointly sitting on the bottom of Conference B with the Southern Kings.

“The bottom line is we let ourselves down there, individually and collectively, and paid the penalty. As a group we put a pin in the ground and said ‘unacceptable’. Everything had been great. We had been working hard, getting bounce, priding ourselves on our work-rate and that had been our norm, and now all of a sudden that happens, and you say you say ‘ugh, ugh, that’s not acceptable’ and there will be some repercussions.

“From the league table, yep, it’s an opportunity missed, an away game, we got a point out of it. Could it have been more? Yes. Should we have got more? Yes, we should have, but we have games in hand to make up that deficit, but it’s put the pressure back on us.”

The difficulty with the Ospreys, says Friend, was was the assumption Connacht would win.

“So we have said, ‘dispel the assumptions boys. You have to turn up. It doesn’t matter if it’s a pro game, whether it’s another team sitting at the bottom of the table. Whoever it is, you still do the same work against every single team.’ We have to be that team, and last weekend it showed we are not that team yet, but we will be.”

Connacht will be without its trio of travelling internationals to Chicago, Bundee Aki, Quinn Roux and Finlay Bealham, but Kieran Marmion will line out against the Dragons.

“Marmion had that injury which stopped him playing 45 seconds into the Ulster game, so he needs footy and we will be keen to give him a run.”