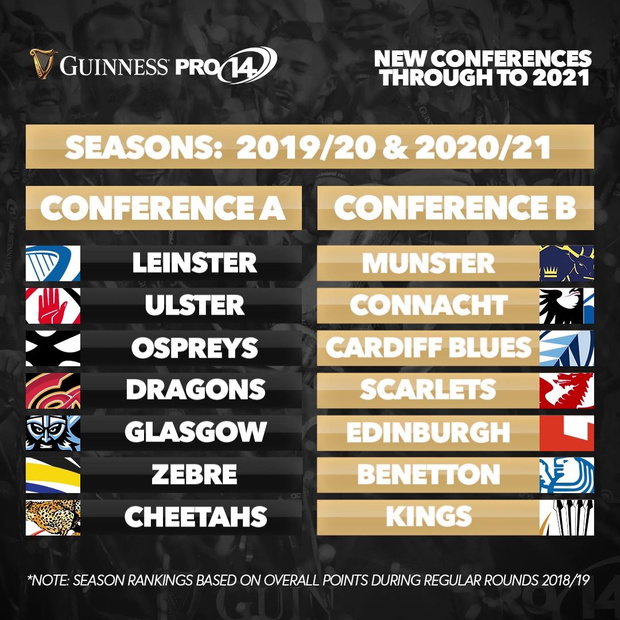 The PRO14 conference have been shaken up for the next two seasons with the 4 Irish Provinces and 2 Welsh regions are swapping conferences.
At first glance it looks like Connacht might have drawn the short straw by moving into Conference B, is that the case?

Familiar foes
We are fully aware of the difficulties that Connacht have when taking on their southern provincial cousins but they did do the double over Munster in the 2015/16 season, a season impacted by the Rugby World Cup. Cardiff Blues invariably cause the men for the West of Ireland difficulties, and the matches are tight affairs, with only 1 result in the last 10 fixtures failing to give the losing side a Losing Bonus point.
Now let’s look a little closer at the rest of the opposition in Conference B to see if the perception of it being tougher for Connacht is true.

As we can see, although the Scarlets have a slightly better record than the Ospreys over the last couple of seasons, there isn’t that much in the difference between the Welsh sides, with both sides really struggling for form last season.
The bigger changes come with the difference in the relative strength of the Italian, South African and Scottish sides.

Connacht will now face off against the weaker of the Scottish and South African teams in Edinburgh and the Kings, but that is balanced against having Benetton instead of Zebre in the Conference.

The Kings have been the whipping boys of Conference B, but with new financial backing and a much more positive offseason with regard to player movement, they might be a more competitive organisation in the upcoming season.
Benetton go from strength to strength under the shrewd guidance of Kieran Crowley, while Richard Cockerill, in his 3rd season with Edinburgh, looks to continue their relentless drive to winning their first championship.

Again, there is very little in the difference Connacht’s record vs the Welsh sides and with only one defeat to a South African side, who are still in their infancy in the competition,  there is equally not a lot between them either, from a Connacht perspective.

Connacht will be happy to get away from their bogey teams in Zebre and Glasgow. Connacht have only 2 wins in the last 10 vs Glasgow, while Zebre have had Connacht’s number in recent years winning 3 of the last 5 matches between the sides. Edinburgh and Treviso have proven much happier hunting grounds for the western province.

Rugby World Cup and Champions Cup impact
The undoubted effect that the Rugby World Cup is going to have on the championship this season, for example, the only time Connacht have managed to do the double of provincial Conference rivals Munster was in the last RWC affected season, will be balanced by Connacht taking part in the Champions Cup while both Scarlets and Edinburgh have the less demanding Challenge Cup to lighten the load on their RWC affected squads.

Conclusion
While it might look like Connacht are in the tougher Conference next season from the perspective of there being more possible playoff contenders, the West of Ireland’s head to head records against their new Conference rivals is better than against their previous Conference rivals, regularly winning in both Edinburgh and Treviso.
So if Connacht can maintain their strong home form, grab some away wins in venues where they have historically done well, and survive relatively unscathed injury-wise from the Champions Cup, the upcoming season might prove to be even more fruitful than the last one.