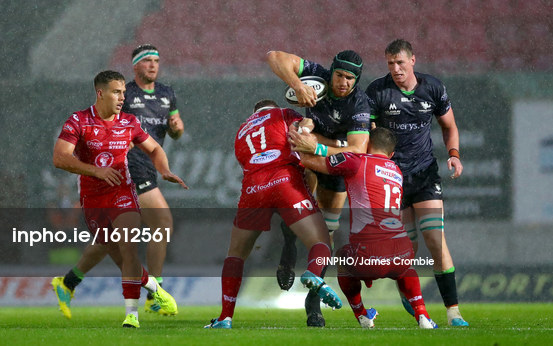 Connacht’s miserable record continued at Parc y Scarlets in their Guinness Pro 14 season opener on Saturday evening when failing to take advantage of the home side missing 15 World Cup players.

A poor opening half ultimately did the damage as the Scarlets led 12-3 at half time, and despite taking charge for long periods of the second half, Andy Friend’s side was unable to record a first win at the Welsh venue.

Both sides displayed opening day rustiness before the deadlock was broken in the 20th minute when Scarlets capitalised after Connacht coughed up a penalty at the breakdown. A solid touch-finder from outhalf Dan Jones provided the home side with territorial control, and after a series of lateral thrusts at the line, eventually the league’s 2016/17 top try scorer Steffan Evans wriggled through a tackle to touch down in the corner.

An increasing penalty count did not help Connacht’s cause as the home side continued to thwart a Connacht attack that lacked the necessary cutting edge, and minutes before the break Scarlets bagged their second try. Fullback Johnny McNicholl made the incisive break through the cover before Steffan Hughes sold a dummy and Paul Asquith finished off from 10 metres out.

Connacht’s only first-half points came two minutes later when outhalf Conor Fitzgerald nailed a penalty to close the gap to 12-3 at the break, but it did not get any better when centre Tom Daly was yellow carded within minutes of the restart and Dan Jones stretched the lead to 15-3.

Hopes of a fightback were raised soon after when a superior scrum provided Connacht with their best attacking platform, and after a series of penalties, the pack took charge. Eventually flanker Eoghan Masterson burrowed over in the 51st minute, and Fitzgerald’s conversion kept Connacht in contention.

However, a mistake on the restart in the deteriorating weather allowed the Scarlets to quickly re-establish control through a Dan Jones penalty.

New coach Brad Mooar will have been pleased with the closing 20 minutes as his side maintained the eight-point advantage and ensured a winning start to the new campaign.