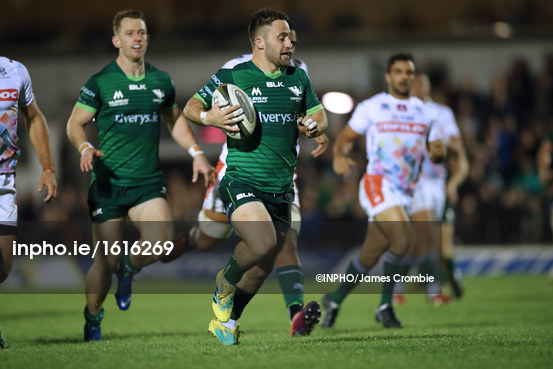 Connacht brewed the only storm in the West this week with a 6 try battering of Benetton in the Sportsground.

After the disappointing outing in Llanelli last week, the western province kick started their campaign with a comprehensive display from both backs and forwards.

Connacht dominated the match right from the start and nosed themselves in front with an early penalty from young outhalf Conor Fitzgerald, who marshalled his troops expertly throughout the match with some perfectly positioned kicks to keep turning the big Benetton backline, keeping them on the back foot.

Winning the contact on both sides of the ball was giving Connacht control, although it was a lack of control that indirectly led to their first try.

A rolling line out got messy, Benetton turned the ball over and hoofed the ball out of the danger zone back into the Connacht half. Fitzgerald the younger, his older brother started on the wing after a late cry off by Darragh Leader, gathered the ball as he retreated near the touchline and threw a sumptuous ball in-field to Tiernan O’Halloran who set off on an arcing run towards the opposite wing. He executed a lovely switch with Kyle Godwin just inside the Connacht half. Godwin danced through a gap in the slightly disorganised defense and then turned on the afterburners as he bolted towards the corner. Luca Sperandio appeared to have run down the flying centre, but an expertly executed hand-off ensured the Aussie international secured his sixth try for Connacht, and his first in the PRO14. Fitzgerald pulled the conversion wide from a difficult angle.

The visitors were doing everything they could with the ball in hand to get themselves into the game but Connacht were putting in monster hits right across the park denying them any front foot ball.

Benetton were also getting on the wrong side of the ref and gifting great field position to the home team.

From one of those penalties, the forwards setup a rolling maul that got them within 5m of the try line. Caolin Blade threw a beautiful dummy off the base and then bamboozled his opposite number with a sidestep before darting over the line for his first try of the season. Fitzgerald nailed the conversion.

The lead was extended to 22 points within 5 minutes. Another penalty infringement for a high tackle on Blade, after one of the numerous lineout steals by the forwards, this particular one coming from the towering Gavin Thornbury. Fitzgerald spiralled the penalty from inside his own half to 5 metres from the the opposition try line. Another brilliant rolling maul from the dominant forwards was finished by Tom McCartney. A fine conversion from Fitzgerald stretched the lead even further.

The Italian side dominated territory and possession for the next 10 minutes, but never threatened the Connacht 22, never mind the try line, as the oppressive home defense dominated.

The half finished with Connacht looking for the bonus point try, but a combination of good defense and some uncharacteristically poor decision making meant that the score didn’t come before the ref blew the half time whistle.

The Treviso based side tried pinning Connacht back early in the second half, but bullocking runs from Boyle and Butler eased the pressure. Fitzgerald won the kicking duel the followed which led to a second try for Blade.

An other perfect lineout, followed by a rolling maul put Blade on the front foot. He ran a loop play off Peter Robb, and with a triple threat of himself, Godwin on a hard line and Matt Healy running an inside trail, the diminutive scrum half backed his darting pace to dash through a gaping hole in the defense to score from 25 metres. Fitzgerald tapped over the conversion and the try bonus was in the bag.

The visitors showed their mettle by getting themselves on the scoreboard 6 minutes later. An attacking lineout maul was halted but the Italians showed commendable patience in going through 9 phases before former Connacht fans favourite Ian Keatley drew the cover defense with a gliding run across the backline before releasing Sperandio to crash over in the corner.

The home side hit straight back with another try. A brilliant midfield break by Peter Robb was stopped short by Keatley but great patience was shown by the pack who went through 11 phases before McCartney got his second try of the night. Fitzgerald popped over the conversion.

The game got scrappy for the next 15 minutes as a plethora of substitutions by both sides broke up the rhythm of the game.

One of those substitutions saw Eoghan Masterson replaced by his younger brother Sean who made his debut. John Porch also made his debut when he replaced Tiernan O’Halloran.

With less than 10 minutes left on the clock Connacht got their final try of the night. They pounded at the Benetton line for 7 minutes showing good patience as they retained possession and forced a couple of penalties. From the 3rd scrum of the period of possession, Connacht recycled the ball a couple of times and Kieran Marmion burrowed under a pile of forwards to score to the left of the posts. Kyle Godwin slotted the conversion.

The game petered out to its inevitable conclusion and a satisfying way for Connacht to get their first win of the season.

Replacements: M Fuser for Snyman (3 mins HIA), Makelara Tomas and C Traore for Appiah (h-t), L Manni for Halifihi, I McKinley for Leonardo and I Brex for Riera (all 52 mins), F Alongi for Mancini and C Trussardi for Petrozzi (both 60 mins).