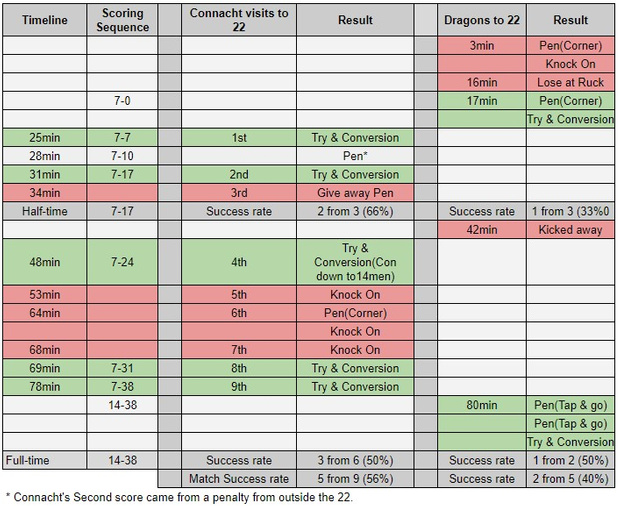 Connacht sit in second in Conference B after a convincing win over the Dragons in Rodney Parade.

The Dragons came out firing, putting Connacht under a lot of early pressure but they only managed to convert 1 of their 3 chances of the first half. All those changes coming in the first 20 minutes.

Connacht were more clinical with their chances in the Dragons 22, scoring 2 from 3 opportunities in the first half, not including a long-distance penalty.

Connacht dominated in the second half. Not only did they limit the Dragons to just a couple of visits to the Connacht 22, they only conceded a score when down to 14 men.

Andy Friend’s charges scored on 56% of the time when visiting the Dragons 22, which backed up their 60% success rate the previous week.

Connacht’s defence limited the Dragons to only 5 visit’s to the 22 and they will need to keep that sort of form against the best-attacking side in the PRO14, Toyota Cheetahs.

The Cheetahs have threats all over the field with their back 3 scoring tries for fun, Rhyno Smith has 5,  Anthonie Volmink has 3 and Walter Small-Smith with 1.

Ruan Pienaar is the leading points scorer in the PRO14, including an 89% kicking success rate, while hooker Joseph Dweba has 4 tries to his name this season also, while out-half Tian Schoeman is the top offloader with 8.

Smith and Volmink lead the championship on clean breaks with 9 each and are in the top three for defenders beaten too with 16 each.

Connacht have conceded fewer points than anyone else in the PRO14 so far and will be looking to ensure that the unexpectedly cold weather isn’t the only thing that is going to cool down the Cheetahs hot start to the season in the Sportsground on Saturday.