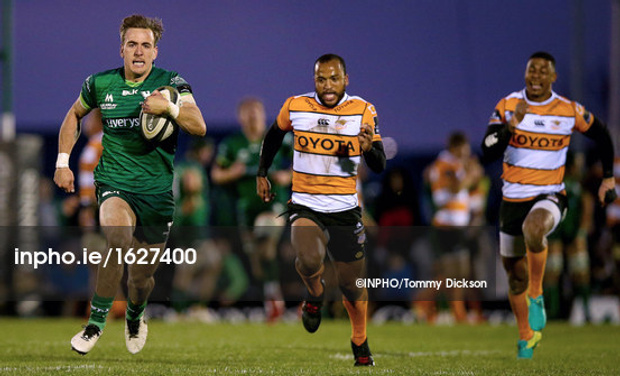 The general feeling in the Sportsground at the end of a pulsating match between Connacht and the Toyota Cheetahs was that the home side had snatched victory by the skin of their teeth and were lucky. We put that theory to the test by analysing the match stats.

We must acknowledge the access to the most detailed match stats of the season so far by thanking freelance rugby writer DJ Rossouw, who also happens to be a huge Cheetahs fan, for posting the raw stats on Twitter.

We will break the stats down into various headings and give a point to the side that comes out on top for each heading, and then look at the final total to see how well it stacks up with the final score in the match.

The home side slightly shade the defensive battle, making a higher percentage of tackles, although having to make less tackles in total. Connacht also made more dominant tackles, with a bit more assistance:

It’s tight, but that’s a point to Connacht.

Connacht not only had more possession (56%) and territory (53%) they also had 5 more minutes in attacking situations than the visitors from the Southern Hemisphere:

It would be expected for the home side to win the possession and territory, however, the extra 5 minutes of attacking give Connacht the edge on this heading too.

One stat that the Cheetahs didn’t outdo Connacht in attack was in tackle breaks Connacht 8 to Cheetahs 4, however, the clincher for Cheetahs in attack was there ability to score when they get into the 22, converting 57% of their chances compared to 40% for Connacht.

Both teams had 14 lineouts and both had a 71% success rate. Each team also managed to steal 2 lineouts.

So a draw on that count:

The Cheetahs came out on top in the scrum, winning all of their own ball and securing 2 penalties, one in attack and one in defence.

Connacht scored 2 minutes before halftime and while Cheetahs finished the half in Connacht’s half they came away with nothing, although they did manage a penalty 6 minutes into the 2nd half.

In the final minutes of the game, Connacht won a penalty and made their way into the Cheetahs 22. The home side could have taken the draw by kicking the last penalty of the game from in front of the posts, but they decided to back themselves and produced the winning score, that also secured a try bonus point.

So, the stats appear to back up the scoreboard and Connacht deserved to win, but the visitors should take great heart from an improved second-half performance and it wouldn’t be too surprised if they managed to finish their first tour of the season with a couple of wins.