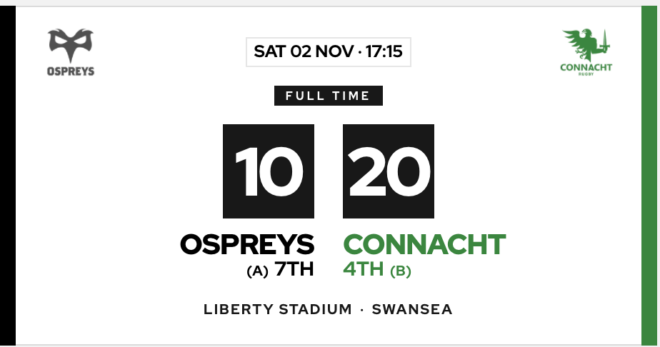 THE momentum continues for Connacht after they secured a fourth consecutive victory in Swansea on Saturday night to hold firm in the top two of their conference after five rounds of PRO14 action.

A powerful and high octane first half saw the westerners build a strong lead before their near flawless defensive effort ensured a second away win of their impressive campaign.

The Ospreys were on a three game winning streak of their own at their home of the Liberty Stadium and started brightly with a penalty from Luke Price after some sustained pressure. Connacht’s response was breathtaking, however, a break on half way involving quick hands from Peter Robb, Conor Fitzgerald on the loop and Tom Farrell then set Niyi Adeolokun away on a blistering break that led to the first try.

Adeolokun, in just his second game back in the starting line up, picked up where he left off against the Cheetahs with another glimpse of his electric pace to beat the defence on the outside before evoking memories of his famous try in the 2016 PRO12 final as he kicked ahead and won the chase to score the game’s opening try.

Conor Fitzgerald added the extras. Fitzgerald then extended the visitors’ advantage with his boot after Ospreys fell the wrong side of the referee for constantly failing to demonstrate a clear release in the tackle before getting over the ball to force a turnover, the fact that they were on their feet was thus irrelevant and the calls were correct.

The best example of this was on Dan Lydiate’s yellow card midway through the first half where he had got back on his feet after tackling the isolated Darragh Leader, but had failed to make any attempt to release the tackled player.

That led to a penalty under the posts and from the resulting scrum, a neat move by Paul Boyle set up Robb who charged over underneath the posts for a 17-3 lead. Connacht were utterly dominant at that stage, especially in defence where the successful tackle count was mind boggling, they had missed just one from 68 by half time. A remarkable statistic underpinned by the fact that the Opsreys had missed over 20 during a very poor first half display from them.

The difference between the sides in the first half might well have been summed up in one Robb tackle on opposition out-half Luke Price who received a high kick on half way only to be met by a thunderous and perfectly timed tackle from Connacht’s in-form number 12 who picked up a man of the match award for his efforts.

As the rain tumbled down after the break, the second half was a slightly more cagey affair, with veteran James Hook adding some stability to the home side’s half back play. The Ospreys were given a glimmer of hope thanks to a try from replacement hooker Sam Parry which got them within seven, but Connacht had an answer in no time at at all through the boot of 22-year-old Fitzgerald and the ten point lead held to the end.

The control and determination shown in the last quarter will have pleased the Connacht management, especially as the young players introduced from the bench such as Matthew Burke, Conor Kenny and Cillian Gallagher managed to maintain the momentum Jared Butler, Paul Boyle and others had put in place over the course of the game.

The injury headaches, however, didn’t subside with Ultan Dillane becoming the third top second row to pick up an injury which is a big concern ahead of Leinster this week but that’s the kind of luck that can go against a side that has put in such an effort in the opening rounds.

Connacht sit second in their conference and have notched up 19 from a possible 25 points to start the season. One more round before Europe, one more push to put them in a great position for a play-off assault in the spring.

Meanwhile, in a further boost, Connacht captain Jarrad Butler, the currently sidelined Tiernan O’Halloran, Sean O’Brien and Tom Farrell have all signed contract extensions until the end of the 2021/22 season.