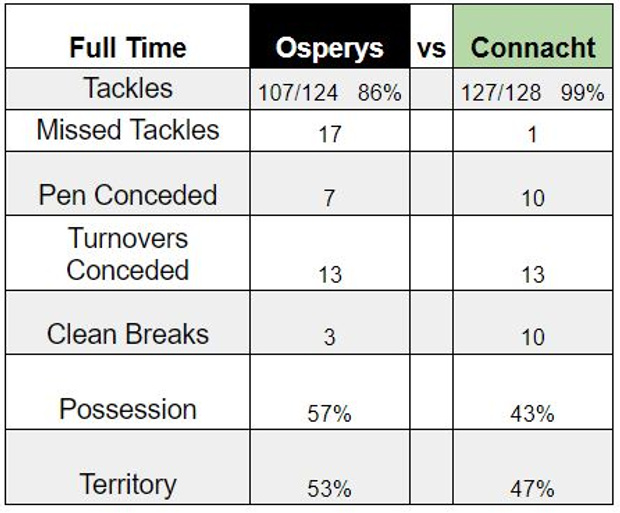 Connacht had an impressive defensive performance in the Liberty Stadium in their victory over the Ospreys, missing only 1 tackle out of 128 made in the game.

Defence wins championships as proven by Rugby World Cup winners South Africa, who had the best defence in the RCW, conceding only 4 tries in the competition.

Workrate
The work rate of the whole Connacht team is immense at the moment. For example, both of Connacht’s starting props had double figures in tackles against the Ospreys.

Andy Friend currently has the whole squad all singing off the same hymn sheet.  This could be seen when a number of inexperienced players came off the bench in the last quarter of the match and successfully closed out the game by preventing the Ospreys from scoring.

Attacking Skills
The passing skill levels appear to be getting back to the same level as the championship-winning season. High-quality passing were a major contributor to the 17 defenders beaten and 10 clean line breaks in the monsoon conditions, and the quality appears to be across the whole squad.

Biggest Test
Connacht face the biggest test of the season so far when they take on the unbeaten PRO14 champions, Leinster.

The Conference A leaders have the most potent attack (26 tries scored) and meanest defense (8 tries conceded) across both conferences. However, Connacht stack up quite well in both departments with 18 tries scored and only 9 tries conceded.

In the first 13 seasons of the championship, Connacht averaged less than one win in the interprovincial matches per season, winning only 9 in total. In the last 5 seasons however, Connacht have won 13 matches vs the other Irish provinces bringing their average upto 2.4 wins per season.

Can Pete Wilkins’s defense shut down Leinster attacking prowess, can Jimmy Duffy’s forwards provide enough front-foot ball for Nigel Carolan’s attack to score enough points to continue Connacht’s improving record in the interprovincial matches and set themselves up for the upcoming rounds of the Champions Cup.