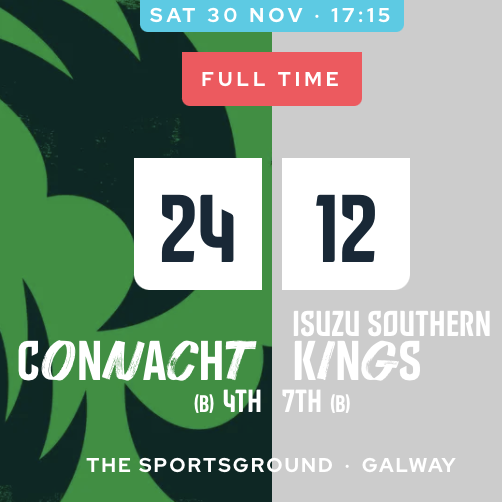 IN the cold light of a Monday morning, this performance won’t have looked so bad. The result was perfect, four tries and a win securing the maximum of five points from a home fixture against the weaker of South Africa’s two teams in this competition.

The outcome was a jump in places within the conference from fourth to second where they sit one point behind the next PRO14 visitors to the Sportsground . . . Munster.

So it is steady as she goes for Connacht in two competitions. The ship remains relatively unscathed after three months of full-on action, the objectives still very much within range.

A home play-off game requires a second place finish in the PRO14, a quarter final place in the Champions Cup required one win from the opening two rounds, and both of those targets remain very possible.

The clouds are gathering, however, and no one is quite sure what these next seven weeks might bring. This was an odd fixture, one weekend of PRO14 action squeezed into a run of four Champions Cup games.

The mindset was always going to be difficult, injured and rested players were returning and only the most steely minded could have avoided thinking a bit about this weekend’s trip to Gloucester, once the fourth try was scored early in the second half.

The job was all but done at that point, focus suffered a little. Perhaps, that’s why there was a sense of frustration afterwards but it was more a case of the errors.

Connacht lost four lineouts from 17 at key points, turned over the ball 14 times and were just unable to produce anything more than flashes of what they are capable of producing.

One stat sums it up, this was a bonus point home win where they had to make more tackles over the course of the game than their opponents. That doesn’t happen often.

Yet back to the cold light of day, this was a well negotiated challenge. No injuries were picked up, the crowd arrived happy with the news that Bundee Aki had signed his new recordbreaking, and era defining, contract to stay in the West of Ireland and they left the ground happy in the knowledge that their team are right on the coattails of Munster in this competition with plenty of points in the bank.

Aki had missed the trip to Toulouse but was back with a bang here, no doubt in a perfect headspace now that contract negotiations are done. Fittingly, he scored the first try on 12 minutes, unfittingly he did so from the back of a maul which he had joined after a lineout five metres from the Kings’ line. Showing good alertness, he slotted in, got his hands on the ball and plotted a pathway to the try line as only he can.

The 7-0 lead didn’t last long as the visitors struck back with Erich Cronje getting over on the overlap after good pressure from the forwards.

Connacht’s key advantage was in the pack and their maul yielded a second try on 24 minutes from another lineout and maul, this time it was Finlay Bealham who was at the back touching down for a 12-7 lead with the conversion just tailing wide.

The third try followed soon after and it was young Conor Fitzgerald that set the tone for one of the tries of the weekend in the competition. The Limerick born out half continues to shine and for a second week in a row he executed a sublime flat pass to Colby Fainga’a, who hit the line at speed and returned the ball to the looping out half on his shoulder.

Fitzgerald then found Caolin Blade and when the scrum half was hauled down 10 metres from the line, Fitzgerald acted a scrum half to quickly move the ball on for Aki to find John Porch for try number three.

It was a move that underpins an ever evolving brand of eye catching rugby that Connacht are developing this season and while full back Van Breda scored on the stroke of half time to dampen enthusiasm somewhat, Connacht went in at the break leading 19-12 and very much on track.

Two minutes into the second half, they had the bonus point wrapped up with another mesmerising score as the backline were again to the fore to set up former Australian 7s star Porch in the corner. The speedster is quickly becoming an elusive presence on the wing for the men in green. The move was scintillating combination of speed and accurate passing involving virtually the whole line. The conversion was missed but Connacht had the bonus point and a 24-12 lead.

There wasn’t a single score in the final 37 minutes. Jack Carty came on and pinned the Kings back deep in their own half time and again and while Connacht constantly coughed up possession or conceded penalties just when it looked like a fifth try was in the offing, they never looked in danger of conceding again despite a spirited and unrelenting effort from the visitors.

The most important issue on Monday morning will have been the injury report, no major issues and that was encouraging. Jared Butler made a welcome return in the second half just in time for a busy December.

The first choice front row was back and delivered here. Niyi Adeolokun was another returnee to get some game time in this contest. On the field and off the field, from contracts to bonus points, Connacht are hitting their targets and moving in the right direction.