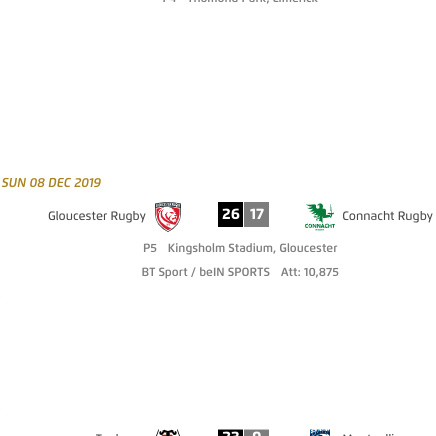 THE Champions Cup adventure isn’t quite derailed but the concession of three tries in 15 minutes in Kingsholm on Sunday has placed Connacht firmly in the position of outsider in the race for a place in the quarter finals.

A three-point half time lead was erased in ruthless fashion as a misfiring Gloucester turned a stroke of luck into a bonus point victory over Andy Friend’s side. Connacht don’t win in England all that often, just twice in 21 years of trying now. This was the latest example of an error strewn and flat performance in front of a crowd of over 10,875 at the famous old ground.

The Connacht players and staff cut a frustrated bunch as they trudged off the field, into the dressing room and then onto the bus for their late evening Ryanair flight back. The bus reached Galway in the wee hours of Monday morning, a full nine hours on from the full time whistle in this one.

The post mortem on that long journey can’t have been easy. Captain Jared Butler was adamant when he spoke to the media afterwards that it wasn’t a case of heads dropping – after a key error early in the second half gifted the hosts a vital try – it was more down to execution and system errors he argued.

That’s the mindset and it must be excruciating to have to dissect the details of such a performance in the aftermath. The modern player doesn’t consider the collective mood or group personalities, it’s all processes.

Fifteen players, each with their individual assignments that contribute to the collective team effort. Their role is crucial, all roles are crucial. It’s the ‘control the controllables’ mindset over the more traditional, all in effort.

Connacht led at half time 10- 7 having bounced back brilliantly from the concession of an early try to turn the tie on its head.

Tom Marshall had got the opening score for Gloucester, who had turned a lineout steal into a sweeping set of attacking phases that eventually saw the hugely talented New Zealand born full back charge through a gap and sprint home with Danny Cipriani adding the extras.

The reply from Connacht was impressive. It started with John Porch at full back, the Australian was still finding his feet in the new position (with four previous starters in the position currently injured) when he intercepted a pass from Ollie Thorley and kicked down field for a huge territorial gain when a try seemed on in the other direction.

The resulting lineout was stolen on the home 22 metre line and just a few phases later, Connacht had the try, Porch the finisher after some pure brilliance from Jack Carty, who drew the cover and reached out over the defender’s tackle arm to execute a mesmerising pass that caught Gloucester completely off guard.

That levelled the scores and within ten minutes, Carty kicked a penalty to go with his conversion and the large group of Connacht fans that had infiltrated the famous shed were in full voice.

The first half ended on two missed opportunities for Connacht, one a missed penalty from Carty from the ten metre line and the second from a scrum on the 22 that provided a last minute attacking platform. Gloucester trudged in at half time still looking the more likely winners but having blown an early lead and offered nothing but errors and missed tackles – they were missing one in every four tackles at that point.

The game turned on 47 minutes. Connacht had started the half well in both defence and in terms of garnering good field position.

A turnover at a lineout in the home 22 from an alert and ever improving Joe Maksymiw should have set the tone for a chance for more points, but after four phases, Connacht were stalling and Gloucester captain Ben Morgan was on the wrong side of the ruck slowing down ball. He got away with it.

Blade eventually got it out but by now Jack Carty was ponderous and his decision to force a pass turned out to be a game-changing run for all the wrong reasons as Cipriani intercepted and made 80 metres before offloading to Rees Zammit for the try.

Connacht might deny that they were rattled at that juncture, but there’s no question that this was the start of a sea change in their performance, error compounded error. Jack Carty was replaced not long after a poor kick for touch and as Gloucester upped the tempo with players like Fraser Balmain and Franco Mostert dominant up front and Marshall and Mark Atkinson making big gains out wide, the tide turned.

A series of penalties led to a sin bin for Kyle Godwin and while he was off the field, the hosts scored two more tries to wrap up the bonus point with Marshall getting the third try of the game and the very impressive Italian World Cup star Jake Polledri getting the bonus point clinching fourth with 17 minutes remaining in the contest.

The game was up and all Connacht could muster was a late score from Quinn Roux when even hopes of a losing bonus point were long gone.

The stats tell a tale. Despite a share of possession at around 50/50, Gloucester made almost twice as many metres with ball in hand (614 as against 317) and managed 15 clean line breaks to Connacht’s four.

Peter Robb was hardly used as in attack, Niyi Adeolokun had the ball in his hand three times in 80 minutes and Connacht just simply weren’t relevant as an attacking force in this game.

It rendered all their good work at the breakdown and in defensive lineouts almost pointless.

The loss of Colby Fainga’a early to injury was a blow and while the return of Butler from injury is welcome, too many other key leaders were either off form or absent, especially in the backline where Bundee Aki just couldn’t get into the game as an attacking threat despite some strong defence.

Three wins from the three remaining games are now needed for Andy Friend’s men but even then, a bonus point, or maybe two will also be required for Connacht to have a shot at one of the three best runners up spots.

Failure to garner even a losing bonus point from a leading position in two away games could prove a telling factor in their Champions Cup story. They didn’t deserve one here though.

Replacements: T Gleave. K Hohneck, J Ford-Robinson, L Ludlow for Ackermann, and A Craig for Mostert (both 65m), C Braley for Simposon (66m), B Twelvetrees for Harris (70m), M Banahan for Cppriani and T Gleave for Marais (both 72), J Ford-Robinson for Ruskin (73).