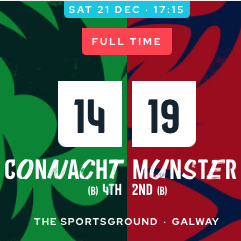 IT really does feel like Connacht just don’t get Munster. They can’t handle their intensity, their rage fuelled enthusiasm at ever maul, scrum and ruck, their ability to stick rigidly to a simple game plan for 80 unwavering minutes.

Munster came to Galway on Saturday evening expecting more of the same from Connacht, high octane, skilful and adventurous rugby. They had a plan, contain, disrupt and where necessary slow down – even if the odd clever penalty has to be conceded to stop a possible try.

In possession, the men from the south looked to kick in behind their opponents, set a platform, force mistakes and take every point on offer. By the 80 minute mark, it was a case of mission accomplished.

It doesn’t seem to matter who they pick from their senior squad – they had a number of emerging stars on show here, including ten changes from their encounter with Saracens the previous week and they still managed to beat a near full strength Connacht.

This was their sixth win in seven encounters between the sides and you can rest assured that such a trend will continue under the current management because Andy Friend’s sides are offering nothing different in the fixture.

The seeds of this slow methodical victory were sown early as Munster absorbed some high octane rugby from Connacht in the opening exchanges and even managed to score first through the unerring boot of the stoic JJ Hanrahan on their one visit to Connacht territory in 15 minutes.

They got their only try on 25 minutes and bar a late period in the half where they were forced to give away a penalty in their 22 to stop Connacht scoring a possible try, they looked in control with a 16-9 half time lead.

The winning of the game came after half time as Connacht produced error after error in the early exchanges and slipped ten points behind.

Munster didn’t add any further scores but kept complete control on the game right to the point where Jack Carty was finally introduced into the contest on 60 minutes. That changed things dramatically for Connacht.

It was as if he was the one home player on the pitch who actually understood what Munster’s game plan was and he quickly set apart dismantling it. He almost succeeded too, as on 74 minutes it was the Roscommon man who scored Connacht’s try to get them within bonus point range off the back of a textbook maul and good awareness from replacement scrum half Stephen Kerins.

Carty showed strength and determination to finish and while there was to be no dramatic last gasp comeback like last week against Gloucester, his score at least secured a bonus point. It was at least a small reward for his impact on the contest.

Munster were worthy winners, however. Their young players had excelled with 20-year-old Irish under 20 start Craig Casey a stand out performer at scrum half. Shane Daly at full back also performed well, while some more established pros such as Dave Kilcoyne, Stephen Archer, Billy Holland and Christ Cloete all had a part to play in the stranglehold that Munster kept on this contest.

Connacht might have had all of the highlight moments in terms of attacks when the game got loose, but Munster managed that well and dominated everything besides.

In terms of the overall season, this most certainly doesn’t derail the project for Connacht. Their fight to secure a place in the top three in their conference will come down to the final few weeks and was never going to rest on winning home interprovincials like this or the clash with Leinster a month ago.

Games in Galway against playoff rivals Cardiff, Edinburgh and the Scarlets will decide that and there’s no room for error there.

Even in terms of the overall mood around the team, this poor performance doesn’t have to be all-consuming.

The previous week’s heroics against Gloucester have created a buffer around the side, keeping them in the hunt in Europe and adding a layer of positivity around the group that might be needed if results go to form in Connach’s away ties to Ulster and Leinster, and they add two more defeats to this one.

It was always going to be a tough period and it’s playing out that way. The decision to leave Carty on the bench for this one just didn’t work. Conor Fitzgerald might well have had an edge on form over the World Cup squad member but with a two week enforced rest set to start for the Ulster game, the 22-year-old rookie is now facing into the prospect of three consecutive starts in difficult inter-provincial games while his more established, experienced and proven rival for the number 10 jersey is unavailable.

It’s not as if Fitzgerald was the cause of the defeat, but it’s too early in his development it seems for him to marshall and control a scrappy game like this, while it is in exactly those type of games that Carty has risen to prominence in recent years.

The contrast between the first hour here and the final 20 minutes merely served to underline how much the Limerick man still has to learn in comparison.

As wake up calls go this had a lot. Injuries during the week meant that Jarred Butler, Colby Faiang’a were both absent (it was the first time this season that neither player were in a Connacht squad), while Peter McCabe and Matthew Burke were out at loosehead, stretching cover to the limit.

Furthermore, Kieran Marmion continues his elongated run on the injury list with a back strain. All that adds up to headaches for management and with Toulouse on the horizon and full strength Ulster and Leinster teams waiting in the interim, Friend could have done with a more positive outing here.

Instead, his side fell into the same trap that has befallen countless Connacht sides down through the years. Munster arrived in Galway, clued in, ready for everything Connacht had to offer and in no mood for relinquishing their control on this fixture. Same old, same old.