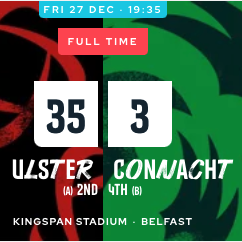 A LOSING run can really knock the stuffing out of a side, and Connacht are in the midst of a slump.

Inter-provincials are rarely fruitful outings for the men in green but this season, it seems worse than ever. The three provinces are soaring in all competitions while Connacht are falling further behind.

Injuries, a heavy schedule, the Champions Cup pressures are all adding up for Andy Friend’s side and Friday’s post Christmas tussle in Belfast underlined as much.

The first half had plenty of highlights, but it will be remembered by Connacht for one spell, however, a series of 30 odd phases in the Ulster 22 that yielded nothing but frustration for a blunt looking attack.

Ulster defended their 14-3 lead with gusto having carved out their two tries from very little possession or territory. It was the visitors who had dominated that area thanks to their scrum and a multitude of lineout steals, but it was Ulster’s impressive skills and offloading that led to them dominating the line breaks in the contest.

Ulster’s first half lead was built almost entirely off the back of one tactic, the garryowen. Simple and devastatingly effective high kicks into Connacht territory with the aim of either making them a two-man contest or at least forcing Connacht into mistakes.

Out of seven first half kicks, Connacht knocked on six and turned over one other. Tiernan O’Halloran was at fault for four in an error strewn effort, John Porch a couple more.

It was the only way Ulster could establish a foothold in the contest. Once they had done so, the scores followed. Their first try from Alan O’Connor was beyond fortunate as while it came from a five metre lineout on the Connacht line, the visitors had stolen the ball on the throw only for it to be tapped down loosely and not claimed. Dubliner and second row O’Connor was more alert than anyone and dived on the ball over the line. A calamity from the perspective of the westerners.

Ulster’s second try was from a more sweeping effort with high skill levels when it came to offloads and more purposeful lines of running from their backline than anything Connacht are capable of producing at the moment.

Billy Burns got their second try under the posts after some sharp play from Will Addison among others. The ever brilliant John Cooney converted.

During the build up to that try, Paddy McAllister hit home star Marcell Coetzee late and made contact with the head with a reckless effort at a tackle. How it was missed by the officials and their television back up is beyond any logical explanation. Both players retired with head injuries but it left a nasty taste in the air.

The game had other flash points: Will Addison and Adam McBurney both were guilty of after the whistle hits on Peter Robb and Stephen Kerins respectively, but McAllister’s was the post game talking point. That takes us to the drama late in the first half as Connacht got themselves in position with a five metre lineout from a penalty and over the course of the 30 plus phases, were held up over the line twice, drew a yellow card for home captain Rob Herring when he was caught offside, and won a scrum penalty only for the following scrum to disintegrate as Robin Copeland struggled to use possession at the base.

The roar from the home support at the subsequent turnover marked half time and underlined that the game was up. The whole spell encapsulated the wider problem for Connacht at the moment, a disrupted backline without frontline stars like Kieran Marmion, Jack Carty and Bundee Aki and, moreover, the lack of shape and incision needed in attack was also brutally exposed. The forwards were to blame here too.

The second half was a non event with Connacht making a critical error on the restart and never recovering. A clearly in need of a rest Caolin Blade kicked the ball directly into touch on a routine clearance. He has played every game with Marmion’s continuing injury problems.

Ulster had the bonus point wrapped up by the 51 minute mark with Robert Baloucoune and Herring getting the scores as Connacht’s missed tackle count grew. The visitors managed just 82% tackle success rate, Ulster were at 93%.

Overall, Connacht asked very few questions while from the Ulster perspective, openside flanker Sean Reidy dominated the breakdown in a peerless display. The absence of Colby Fainga’a and Jarred Butler continues to be an issue and is added to by the fact that Quinn Roux is now out for four to six weeks too.

The backline is completely disrupted also, Kyle Godwin was supposed to be out-half cover on the bench but was called into the wing when Matt Healy was withdrawn before the game.

So, Andy Friend is down to the bare bones of a squad, scrambling for players to play at the RDS this Saturday against Europe’s best side and hoping against hope that his team can compete with their illustrious hosts. His longest losing streak within a season so far in the west sits at two, but that should be broken this weekend.

By the end of the Leinster game, his side will probably be sitting second bottom in the conference having started the month in second. “We don’t have the numbers to rotate – we have got what we have got. We have 24 fit players right now and actually after this game we probably have less than that. It’s all part of our learning. We have put ourselves in the Champions Cup, we have put ourselves in the top end of the the Pro14. We have got some bodies that are banged up at the moment, but I guarantee you Connacht won’t stop fighting. We’ll put a side out in the RDS next week that will be trying to win the game of football.”