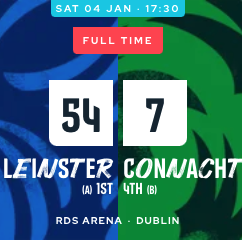 ROB MURPHY at the RDS

WELL this was predictable. It was always going to be this way. A run of games like never before, 13 straight weeks without a break. Three Christmas interprovincials sandwiched in between four Champions Cup ties and not a single week of rest.

To nobody’s surprise, last Saturday evening trip to Dublin turned out to be the point of least resistance as Europe’s most consistent rugby team lay waste to a desolate and bedraggled Connacht.

It’s hard to imagine how it could have gone much worse in the first half. Connacht couldn’t do anything right. They asked nothing of Leinster with the hosts having to just make 49 tackles, missing only one.

Connacht had to attempt close to 300 and did well to make over 80% of them. In between, they were sliced and diced during a blitz that saw the hosts score six tries for a 40-0 lead.

It was humiliation territory from the 19th minute when Joe Tomane burst through the cover for the bonus point try before the first quarter had been completed. Max Deegan had notched the early score, Dave Kearney had sprinted home on the wing as an overstretched Connacht defence was found wanting and Ciaran Frawley had scored a wonderful try combining with Deegan before the Australian centre had got try number four.

Connacht have had the odd bad day against Leinster but this was right up there. It was a record defeat in terms of margin of victory and it was the record score in this fixture; outdoing Connacht’s famous victory over Leinster at the Sportsground in John Muldoon’s final game back in 2018.

They still talk about that one in the stands and probably in some corners of the dressing room as well. Leinster haven’t lost in this fixture since that day. Once Tomane had scored that try, it was only a matter of by how much they would win.

They added two more before the break from Luke McGrath and Frawley and, mercifully, eased up after half time as Connacht offered a little more resistance thanks to some positive performances via the replacements bench.

Tom McCartney and Joe Maxsymiw deserve credit in that regard, Stephen Kerins and Tiernan O’Halloran too. Yet Leinster still managed two more tries from Gary Ringrose who along with Jordan Larmour, James Ryan and Tadgh Furlong was playing his first PRO14 game of the season.

The World Cup stars have just featured in Europe so far, as Leinster have the squad size and depth of quality to win without them in this competition. As of now, they have played 14 games in all competitions this season and won them all with four try bonus points in ten of those games.

So while this defeat was both inevitable and predictable from a Connacht point of view, keep in mind it was never going to be a fixture that would have offered much by way of hope for the westerners, even if Jack Carty and Bundee Aki hadn’t been on a mandated rest period or if the likes of Quinn Roux, Ultan Dillane, Colby Fainga’a, Jarrad Butler, Kieran Marmion and Matt Healy had been available.

This was always going to be a bridge too far. The good news is, a lot of those names are set to be available this weekend for the visit of Toulouse in Europe and one or two of the side that suffered such a humbling on Saturday will be better for the experience, yet Stephen Fitzgerald and Conor Fitzgerald both picked up knocks that will rule them out and for some of the other starters, the confidence knock might be more significant than they can even contemplate at the moment.

What will be most disappointing for the starting 15, will be those opening exchanges, the mistake in the lineout that led to the first try was baffling, an overly complicated trick move at the front of a lineout that needed to be conservative in those early stages led directly to Deegan’s opening try.

Poor discipline had a part to play in three of the next four tries even if some of referee Mike Adamson’s calls were easy to dispute. The gulf in class between Europe’s elite and where Connacht sit might not be as vast as this or the October home clash with Leinster might suggest, but it isn’t far off it.

To bridge that gap, Connacht will need a lot more luck with injuries and a deeper pool of talent to pull them through a run of fixtures as daunting as what we have just witnessed.

In the interim, they have to lick their wounds and get back to brass tacks. The illustrious kingpins from Toulouse might not be an ideal follow up, but no one is going to admit that.