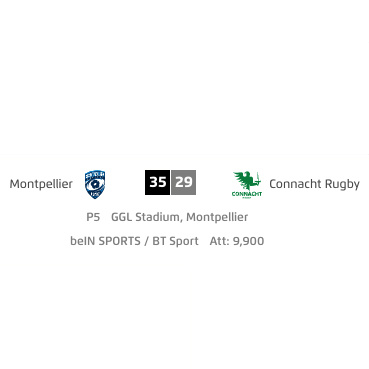 BY the end of this spectacular encounter which included nine tries, it was hard to believe that both sides had been playing only for pride. Montpellier had selected a near full strength side, so had Connacht, both teams wanted a morale boosting win to bookend the winter programme of games.

In the end, the hosts hung on by a whisker as Connacht’s high octane performance came up just short on a mild Sunday at the GGL Stadium.

Connacht started poorly and looked to be on the verge of a humiliating loss after just a half hour when they trailed 21-0, but turned that around with some of the most impressive attacking rugby they have produced under Friend to lead by five points just after half time, having notched four stunning tries in 13 minutes of rugby.

That set up a tense and bruising battle in the final half hour where Montpellier’s power, speed and big line breaks proved just enough to win the contest.

Friend summed it up afterwards. “It was a bizarre game, we didn’t turn up the first 30 minutes and then we had an incredible 10 minutes, but overall the mood is pretty flat. We worked hard at the tail end, couldn’t get across the line. We all probably felt like we were going to but we just didn’t get the biscuits in the end. So it’s frustrating, we just didn’t get the result but it was a much better performance which is what we were looking for there.”

The start was horrendous for Connacht. They barely had touched the ball before Georgian Levan Chilachava barrelled over after an impressive spell of attacking rugby from the hosts.

The game did settle for a while, but it was no surprise that Montpellier were next on the scoreboard as they had been making ground from line breaks for a long period of time, and the two tries that followed from flying winger Gabriel N’gandebe were impressive fast moving scores. South African World Cup star Handre Pollard converted all three of the scores and as Connacht re-grouped under the posts just before the half hour mark, the deficit was 21- 0 and another nightmare of a result – along the lines of their away trips to Leinster and Ulster in recent weeks – seemed on the cards.

Yet Connacht weren’t completely out on their feet either and the body language certainly didn’t look as downbeat as we saw in Dublin or Belfast in recent weeks. The Connacht response to that third try was bordering on the outrageously good.

For the next 13 minutes of rugby, they scored four tries and 26 unanswered points to go from an almighty deficit to a five point lead early in the second half.

It was by far the most eye-catching spell of attacking rugby of the season and the hosts were visibly and understandably stunned. The tries were all well taken.

Matt Healy scored first in the corner after the defence was sucked in by a series of good forward attacks. John Porch got the next try pretty much from the restart as Connacht broke out quickly with Colby Fainga’a and Tiernan O’Halloran involved before the Australian speedster was released on the right wing to score in the corner with a spectacular diving effort.

The touchline conversion from Jack Carty brought the 150-odd Connacht fans in the stadium to their feet once more and that wasn’t the end of it, as by half time they were level with Kieran Marmion marking his return from injury with a try under the posts after Bundee Aki crowned a fine first half with a brilliant half break and pass.

Three minutes after half time, they were ahead, this time Kyle Godwin the scorer after a well timed pass from Carty. From there to the end, the game took a different shape as Montpellier’s big pack of forwards and hard running fast backs stretched Connacht to their limits defensively.

Yvan Reilhac scored on 52 minutes to restore the lead but Carty responded with a penalty to put Connacht back in front, 29-28. From there to the 77th minute that lead stood thanks to some stoic defending and last ditch turnovers, but the pressure eventually told and Reilhac got his second try with three minutes to go. That set up a grandstand finale, where Connacht came agonisingly close to ending their losing run and snatching a morale boosting win against a near full-strength home side, but their last attack ended with a knock on just inches from the line.

The match and the scoreline may well turn out to be a footnote, but the heroic failure to get that final score will rankle for many weeks to come.

Friend tried to make sense of it all afterwards. “I just didn’t know where we were in that first 30 minutes, we were slow to the breakdown, slow to react and we weren’t driving with our legs, but then all of a sudden a switch was flicked and off we went.

The boys just said in the shed there that that 30 minutes of football is exactly what we can do and it’s really fun to play like that, so hopefully that has given them a taste and a shot of confidence to know that we can still do that. “It has been a tough block for us 13 games,” added Friend in reference to the unbroken run of fixtures that was bookended by a run of five straight defeats. “There were some big teams, some losses at the tail end there. The message there was just that this run will make us stronger, to get away and take a break and come back for a massive game against Cardiff at home.”

Connacht players with the exception of Irish squad members Dave Heffernan, Bundee Aki and Ultan Dillane will have a much needed break now before returning mid-February for that PRO14 home clash with conference rivals the Blues from the Welsh capital.

Then it’s a trip to Edinburgh and South Africa to take on the Kings as the push for play offs becomes the new focus. Time will tell if this improved performance was a turning point. Their first objective will be to put an end to the worst losing run since 2014.

Replacements: A Bouthier for Vincent, V Giudeicelli for B Du Plessis, and U Tcheisvhili for Nariashvili, M Haouas for Chilachava (all 51), K Fotuali’i for Paillauge (57) T Darmon for Pollard (68), K Mikautadze for Willemse (68), M Devergie for Camara (70), Pollard for Bouthier (70).