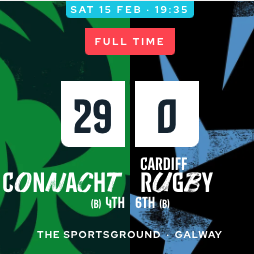 THE storms have passed and the damage is far from terminal.

Connacht are starting to find their feet again after an overwhelming run of injuries and challenging fixtures had threatened to derail their season. A not far off full strength side took to the field at the Sportsground on Saturday and patiently took apart a patched up Cardiff Blues outfit to secure a bonus point victory and a first ever blank scoresheet at the venue in this competition.

At the helm were the brilliant half back pairing of Kieran Marmion and Jack Carty – the first time they had started a game together at the Sportsground since September 2018. A combination of regular international involvement and injuries at different junctures meant their paths rarely crossed in that period.

On Saturday evening as the winds and rain eased for a few hours, they reminded everyone why they are both elite international players with a display of poise and class.

This was by far the best display of a difficult season so far for the men from the west. The run of 13 consecutive games in Europe and Inter-provincial between November and January had left Andy Friend’s side out of Europe and outside the play off positions in the PRO14 as well.

Needing at least seven wins from their final 11 games, this contest – against a conference rival – was a must win and the attitude was right from the start.

Missing just Bundee Aki and Quinn Roux from what would be their full starting line up, they had the advantage. Cardiff had three involved with Wales the previous week in Dublin and four more key men out through injury, so down seven, but hardly devoid of serious talent either, they came to Galway needing a dogged defensive effort.

The Blues delivered in defence in that first quarter, with Olly Robinson twice turning over possession in his own 22 and their scrum winning two early penalties.

Connacht came at them in waves but could only manage three points from the boot of Carty in the fifth minute. The patience and poise demonstrated, however, meant they didn’t lose their shape and kept plugging away, laying the groundwork for the four tries to follow.

As early as the first minute, the attacking intent from the men in green was on show with Carty releasing Tiernan O’Halloran in a move that almost led to the first try.

It was one of many such breaks that had Cardiff stretched yet the first try came from a very different source, Connacht’s hard work defensively at lineout time. Ultan Dillane and Gavin Thornbury lay waste to the Cardiff set piece turning over possession time and again. It was that pressure that led to Connacht’s first try on 27 minutes.

Carty’s superb kick in open play had pinned the visitors back in their own 22, the Connacht lineout put more pressure on and Blues hooker Liam Belcher overthrew his target into the hands of the grateful Dave Heffernan, the Ballina man dodged two tackles to score from ten metres out.

The conversion had Connacht 10-0 ahead and six minutes later the lead was 15 after Carty executed a superb kick into the corner for Peter Robb to run onto and score.It was in the midst of some sustained pressure in the Cardiff 22 metre area and required the Roscommon born out-half to neatly drop the ball onto his weaker left foot to get the angle.

The game was all but done at that stage. The wind and rain stayed away for the third quarter and Connacht completed their main second half goal of securing a four try bonus point with minimal fuss.

Carty and Denis Buckley combined to set up the third try, the loosehead prop taking a line at speed that most centres would be proud of before offloading the ball behind his back for John Porch to scoop up off the ground and score his fifth try of a fine first season.

The bonus point was complete on 58 minutes with the ever alert Peter Robb making the score from inside his own 22 when he picked up a loose ball, drew the cover and set Kyle Godwin away for an almost 90 metre run to the line.

The home crowd roared him home underlining the extra point, but perhaps also underlining their relief that the poor run of form might be over. Let’s be clear, Connacht had their challenges this winter with injuries and a schedule of games as hard as any we’ve seen in a decade – six Champions Cup games and four inter-provincials in their last 11 fixtures. It was no wonder that they won just three.

The only other one they probably should have won was the home fixture against Munster. The injury count and strength of opponent all played a part. Yet from now until the end of the season, they have ten games all of which offer a lot more hope of success, especially if their luck changes on the injury front.

The target is a top three spot in their conference. They are two behind the Scarlets, four back from Munster and eight points off Edinburgh who they face this Friday. Cardiff and Benetton Treviso are chasing them from below.

The men from the Scottish capital will offer a sterner test in Murrayfield this weekend but there were real signs here that a corner has been turned.

The front row options are rich. Dave Heffernan was man of the match here, his Irish squad involvement has only added to his fine play and while he might miss the next two if he continues to progress with Andy Farrell, he’ll be vital in the closing months of the campaign.

The return to fitness of Jarred Butler and Colby Fainga’a who both missed some game time at Christmas is clearly a key element to a change in fortunes. They again excelled here, so too did Gavin Thornbury who picked up a knock to the calf that might rule him out this week, but elsewhere the prognosis is good too with Niyi Adeolokun and Porch showing plenty of attacking prowess and the bench having an important impact.

There’s a lot of rugby to be played yet, but it looks like the wind has caught the sails. Progress at last.