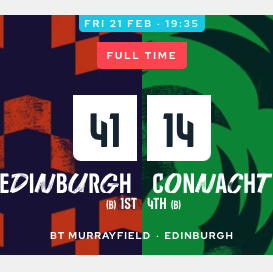 THE brilliance of Richard Cockerill’s Edinburgh collided with an uncertain and stuttering Connacht on Friday night in Murrayfield and the result was alarming, if also understandable.

A strong first half lay the groundwork and a powerful finish completed a bonus point win for the hosts in wet and windy conditions as they moved further ahead of the field at the top of the conference.

Meanwhile, the men from the west head to South Africa this week with their play-off hopes in jeopardy. Connacht brought some momentum into the contest from the bonus point win over Cardiff the previous week, but they brought plenty of problems with them as well, highlighted by their continuing difficulties at the breakdown.

Injuries and Ireland call ups left them down three key men in the second row and a serious ankle injury in the first minute cost them the services of Finaly Bealham, who could now miss the rest of the season.

All the while, Edinburgh looked the more settled, well motivated and confident side on the field despite the fact that they were missing a lot more players than their opponents, up to 12 key front liners involved with Scotland or carrying knocks.

In the past, that would have left them scrambling but over the last 18 months, former Leicester Head Coach Cockerill has been spending plenty of money to build some squad depth. Big money signings in recent seasons have played a key part in ensuring that the team can continue progressing even when Scotland are in action.

South African Mark Willmese has come in at hooker, Fijian Vilame Mata has taken the league by storm at eight, and the half back partnership of Nic Groom from South Africa and former New Zealand under 20 Simon Hickey is as good as you’ll find the league and still second choice.

It’s hard to compete with that work in the transfer market so on the field you have to be at your best when you face Edinburgh these days and the ever inconsistent Connacht were miles off a performance that could be termed the best they could collectively produce in this one.

From their ongoing struggles at the breakdown to the handling errors at key junctures and by the end a loss of discipline and shape, this was up there with the worst they’ve produced all season.

There are some positives and one or two mitigating circumstances to highlight here. They fell 20 points behind in the first half and the game should have been done by that point, yet they had suffered a yellow card decision that was simply outrageous and recovered from that call to score tries right at the end of the first half and early in the second half to pull within six at 20-14.

Injuries are a problem too. Quinn Roux remains out and sorely missed on nights like this. He would help protect possession for starters. Gavin Thornbury’s ongoing niggling issues have him out as well and Ultan Dillane and Dave Heffernan are justifiably in the Ireland camp along with Bundee Aki based on form, but proving difficult to replace.

Shane Delahunt battled well at hooker, while Joe Maksymiw and 20-year-old Niall Murray didn’t wilt here either and have huge potential, but ultimately were part of another harsh lesson.

Edinburgh’s first half lead was built on the super goal kicking of Hickey with two early penalties and a highly controversial try where after a long television match offical (TMO) intervention. Matt Scott was adjudged to have lost possession over the line but Jack Carty’s seemingly successful attempt to reach over his shoulder to dislodge the ball was inexplicably deemed to be a high tackle as opposed to a perfectly legal contest for possession. A penalty try and a yellow card followed. Ridiculous is the only word for the decision.

That said, the score did come from a searing 30 metre break where Edinburgh carved Connacht open in the middle of the field, exploiting a missed tackle from Denis Buckley in the process.

During the sin bin they exploited Tiernan O’Halloran’s needless penalty to kick into the 22 and set the platform for a second try from prop Simon Berghan after a series of phases on the visitors line.

Connacht’s strike back either side of half time saw O’Halloran make amends with a couple of tries, both rather unusually coming from possession where forwards normally stand out as Connacht scored from simply going through numerous phases of pick and go rugby at the fringe of the ruck within five metres of the home line.

Patience and power was on show here and that clearly is one area where Connacht have improved in recent months. The game turned on the hour when the replacements were introduced. Connacht didn’t get the boost they needed from the bench but the timing of the changes didn’t help either.

At 20-14, with a defensive lineout on their own 22, Connacht changed three including introducing Jonny Murphy at hooker and the key throw was crooked.

That set the platform for Edinburgh’s crucial third try as the brilliant Mata attacked off the back of the scrum, exploiting an error from Paul Boyle who didn’t spot the danger in time and scored soon after through Pierre Schoeman.

Connacht had plenty of reason to complain about the refereeing of the breakdown in the lead up to that score, but even acknowledging the poor officiating from Marius Mitrea and his crew, they had more to worry about than that.

Edinburgh added two more tries to secure the bonus point and increase the lead, a penalty try and a neat finish from another one of their big money overseas additions in Duhan Van Der Merwe.

While not for the first time this season, Connacht lost their shape and shipped a big score against a more powerful opponent. You can now add the men from Scotland’s capital to the list of sides that have notched up bonus point wins over visiting a Connacht outfit this year. The Scarlets, Toulouse, Gloucester, Ulster, Leinster and Montpellier the others.

The gap between the elite sides and where Connacht currently reside appears to be growing and as the men in green head to South Africa for their clash with the Southern Kings, the challenge for the moment is to make sure they at least continue to build up the wins against the sides below them.