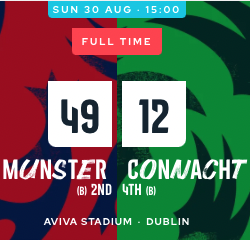 FOR all the wrong reasons, this was another memorable occasion at the Aviva Stadium for Connacht on Sunday.

Three yellow cards and two red cards in the first half made a mockery of proceedings in front of the empty seats. Munster had raced into an early 14-0 lead and forced (or more accurately tempted) Connacht into conceding six of the first seven penalties before the fixture descended into complete farce.

The blame for it will lie mainly with Connacht as they were the ones reduced to 13 men before half time, but Munster players and referee Frank Murphy played a part in this too.

First the background, Connacht made 14 changes from the win over Ulster for the fixture as management persevered with a a plan to give as many of their senior squad a run out over the two weekends. Munster only made five changes from the narrow defeat to Leinster, in part because they needed a win to book a place in this weekend’s PRO14 semi finals.

The seven try to two drubbing was probably no major surprise as a result, but the circumstances in how it played out was jarring to say the least.

The game was played out in the backdrop of the new law interpretations with referees under pressure to punish sloppy play in the tackle area. This element combined with two sides that seemed determined to test the limits of what is allowed, made for a mess of the fixture as Frank Murphy awarded an extraordinary 35 penalties during the contest. A total of 20 to Connacht, 15 to Munster and the card count was two red and one yellow for the westerners, whereas Johann van Graan’s men had two yellows and could have had more.

Munster set the tone early dominating the breakdown through the brilliance of CJ Stander. They won multiple penalties and forced an early yellow card for Connacht’s new signing Conor Oliver.

Chris Cloete scored a try soon after and by 15 minutes the lead was 14-0 thanks to a penalty try being awarded as they mauled over the line.

For one brief spell after that, Connacht showed some life. Having stopped conceding penalties, they started to carry the ball with purpose. New signing Abraham Papali’i had some stand out moments, including a steal from Stander and a couple of good carries.

The introduction of Bundee Aki for the injured Tiernan O’Halloran injected more energy but the resurgence was temporary.

Two red cards in the space of ten minutes killed the contest, and both were examples of the new focus on player safety that was introduced at the start of this elongated 2019/20 season. Papali’i was first to go for a rugby league style tackle on Conor Murray where first contact was to the head of the Lions and Ireland scrum half.

Soon after Shane Delahunt saw red for leading with the forearm while on a carry and making contact with Stander’s head. Two moments of mindless play.

Munster scored again through Jermey Loughman before demonstrating some sloppy discipline themselves, conceding two yellow cards before half time (Peter O’Mahony and Tadgh Beirne) in the lead up to a Bundee Aki try.

After half time, the men in red notched three tries before the hour mark, Andrew Conway with two and Beirne with one, while Connacht did show some admirable spirit in the closing quarter to score a try through the ever improving Johnny Murphy and conceding just one more despite playing with only 13 men.

Connacht used 36 players over the two weekends but the manner in how this contest played out will be the source of some concern as they go back to camp for six weeks of preparation ahead of the start of a new season in October.