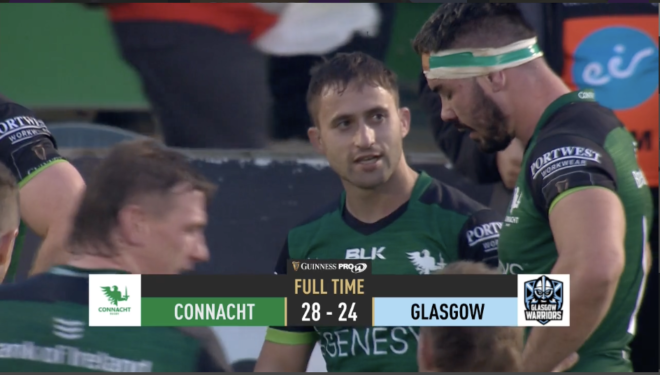 OFF they go again. No sooner has one season ended than a new one begins. Connacht
broke with some well established trends at the Sportsground on Saturday night to secure a rare opening day win over their old foes from Glasgow.

A second half flurry of tries thanks to scintillating attacking rugby saw them scrape home in front of 200 lucky supporters who were allowed access.

Bundee Aki led the way. Connacht’s star man adds grit, leadership and explosive speed to everything they do. He had two tries and played a pivotal role in the evening.

He wasn’t the only star man. Jarrad Butler was a powerhouse. Dave Heffernan underlined why he remains in contention for more Ireland caps. Finlay Bealham was in storming form and Kieran
Marmion is back to his best too.

Yet all of those plaudits stem from what we saw after half time as this was a complicated
tale.

Andy Friend’s side were poor in the first half, so were Glasgow but they were misfiring while dominating possession and territory. Connacht on the other hand were getting overawed at the breakdown to the point of losing discipline and conceding penalties to a side that had beaten them six times in a row since the famous 2016 PRO12 semi final.

How the home side didn’t concede an avalanche of first half tries is baffling as they had the ball for a mere 30% of the contest and had to cope with Quinn Roux’s sin binning midway through the half.

Part of the reason for Glasgow only scoring the one try late in the first half from Nick Grigg was the home defence. The best example of this came in how they dealt with the lineout and maul of the visitors.

After half time, the outlook looked even a little bleaker when Adam Hastings added to
his first half conversion with a neat long range penalty for a 10- 3 lead, but Connacht at that point were already showing signs of life and by the 50th minute of this fixture, the game turned.

The match winning spell came just around the hour mark with two tries in quick succession from the home team. Aki scored the first, after a swift break from Tom Farrell, Quinn Roux got the second after a flurry of attacking play kick started by John Porch at full back involving Alex Wootton, Peter Sullivan and strong link play from Marmion.

Roux’s alert play after a series of closein attacks from the forwards secured the try.

Glasgow weren’t done. Huw Jones scored a fine try to level
matters, but Jack Carty’s penalty broke the deadlock again before the try of the game and the match winning score soon followed for Connacht with the electric Porch in his new role at full back, sparking the score with a counter attacking run.

On loan Munster winger Wootton then took it on with a 30 metre run along the touchline followed by a perfectly time kicked ahead. Aki did the rest, his support run was perfect.

Glasgow responded with a try from Grigg to pull within one point but Carty’s late penalty
and some relentless tackling saw the home side survive.

It’s going to be a long and unusual campaign. Merely getting games played and keeping the show on the road will be an achievement in the coming months.

No stone has been left unturned in Covid-19 precautions with weekly tests and constant temperature checks but all of that will merely flag a potential problem, players return to their
homes each evening and are as susceptible to the disease as anyone.

So far, so good though and the team will fly to Wales on Saturday morning to face Cardiff later
that day before flying back in the early hours of Sunday morning.

Strange times but the on field objectives and challenges are nothing new.