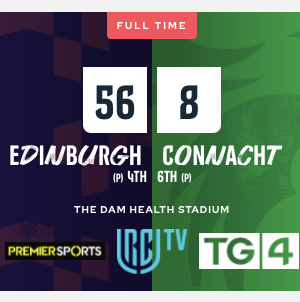 Well Connacht returned to their brilliantly inconsistent self last night after a pretty humiliating result in the Scottish capital.

After a pretty decent opening quarter, Andy Friend’s men simply fell apart and played like a bunch of individuals rather than a team.

We hear from William Davies and Rob Murphy as they try and make sense of an incredibly insipid display while we get the Edinburgh view from BBC Radio Scotland’s Alan English.

We also have the thoughts of a seething Andy Friend too.