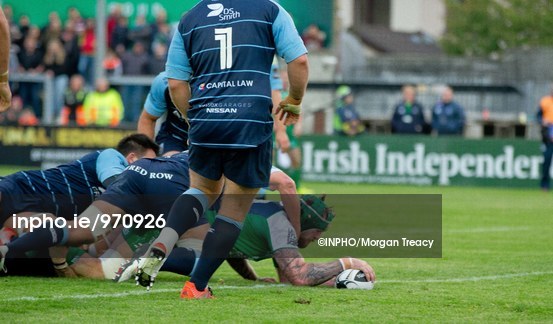 The dust has well settled from Saturday’s bonus point home win over the Cardiff Blues and the positive vibes have certainly lingered longer. It was a mixed bag of a game at a sunny Sportsground but the bare bones don’t read too badly for Pat Lam and his crew.

The stats read as follows. Connacht scored five tries to secure just a fourth win in 22 attempts against their bogey side from the Welsh capital. In doing so the westerners moved into fourth place in the table just one point behind the three joint leaders, Llanelli, Munster and Edinburgh. That’s a solid start.

The frustrations remain. The Glasgow defeat hasn’t yet been etched from the mind, the Scottish side were very much there for the taking and in that one. Right at the very end Connacht conceded a fourth try to the Blues which secured the visitors two bonus points from the game.

It made for a very anticlimactic conclusion as everyone at College Road knew that such a score could be crucial come the end of the season. The Blues will be one of Connacht’s main rivals for a top six spot this year.

It bares repeating ad nauseum that this is the time for Connacht to make hay. The fixtures have fallen well for them, lots of home games and fixtures against last years bottom six during a World Cup period were only a handful of squads aren’t decimated.

The Irish provinces, Glasgow, the Ospreys and the Italian sides are worst affected but sides like Cardiff are not exactly at full strength. Eight players were unavailable at the weekend. Gethin Jenkins, Sam Warburton, Lloyd Williams, Cory Allen, Alex Cuthbert (all Wales), Rey Lee-Lo (Samoa); Cameron Dolan and Blaine Scully (Both USA)

At the start, the hosts seemed at ease. Piling on the pressure and pinning the Blues back but this was a game with plenty of momentum swings. The first try came from a loose Tom McCartney pass on the Cardiff 22 that went straight to an alert Aled Summerhill who ran the length of the field.

Connacht responded well and went on a run of 19 points in the next 20 minutes to complete take control of the game.

Kieran Marmion darted through a huge hole at the breakdown ten metres out for an easy score. Nepia Fox Matamua scored at the back of a maul and Danie Poolman brilliantly finished off a flowing move in the corner after some great work from Bundee Aki and Rory Parata.

All was well but the mood softened either side of halftime as the Blues raced back into contention. Josh Turnbull drove over at the base of a scrum, Rhys Patchell converted and added an injury time penalty seconds after Tiernan O’Halloran had been shown a yellow card for a blatant offside offence. A 19-17 halftime lead was not anything to crow about.

It got worse for Connacht as the Blues completed a run of 17 unanswered points when their impressive full back Dan Fish scampered over and young out half Patchell converted for a 24-19 lead. The Blues had moments where they looked like they would score again and pull well clear but in the final half hour, Connacht regrouped.

First Tiernan O’Halloran scored after a well executed Jack Carty crossfield kick. That was converted and within minutes Connacht were further ahead after the hugely impactful replacement Aly Muldowney scored at the end of a run of over 25 phases of sustained pressure. Without question Connacht’s best try of the season. Carty added a conversion and a penalty for a 33-24 lead.

That should have been the end of it but the Blues have got injury time tries against Connacht down to a fine art and showed resolve and determination to find a way over right at the end. The try from Sam Hobbs secured both a losing bonus point for finishing within seven and an additional extra for scoring four tries.

This is round three, by the end of round seven, Connacht should be targeting top spot in the standings. The five points earned here were not garnered in a routine way and there was a lingering frustration in the air in the post match press conference but the job was done and the games that lie ahead are hardly daunting.

In two weeks time, Zebre come to town, a bonus point win there has to be the target, a trip to the Ospreys usually offers little but that encounter seven days later could be timed just right for Connacht to catch a very under strength Swansea based side on the hop. Then Edinburgh and Treviso visit, tricky ties but well within the range of Lam’s side.

What follows after that is a horrendous run of fixtures that includes a gargantuan trip to Russia, away ties in Munster and Cardiff, back to back games against Newcastle, Christmas inter provincials and so on. In all, from kick off against Zebre, Connacht will be on a run of 16 games in 16 weeks. Never before has the schedule being so gruelling. Now is time time to prepare and a barn full of points come early November is a must.