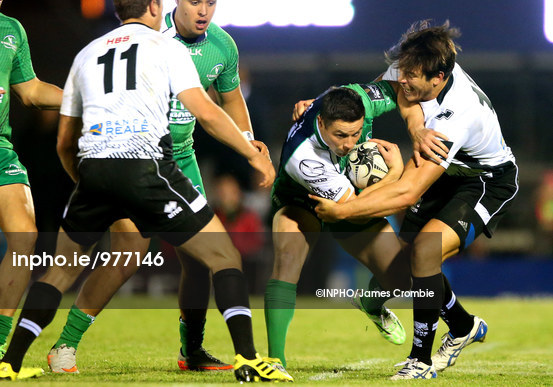 ONE could hardly fault Connacht at this stage. Four rounds down and 16 points out of a possible 20 secured. That’s good going and it has the westerners second in the table. Key to that return are the four bonus points secured, including two in the defeat to Glasgow, meaning that Connacht sit just a single point behind unbeaten Munster.

Friday night at the Sportsground was very much in keeping with the early season trends. A game of many tries with flashes of the best rugby theY produced last season mixed in with some off key scrappy spells. It’s a strange trend and, perhaps, underlines the progress Pat Lam has made with his young squad as even when all is not well the side can still produce scores at key junctures.

The Samoan Head Coach was far from happy in the aftermath of this one, similar to the previous round against Cardiff, his side had dropped their intensity dramatically in the latter stages of a bonus point home win. The final half hour was error strewn to say the least and far from a standard that would satisfy their ambitions.

The start was a different story. Matt Healy’s try was neatly taken, showcasing his pace and finishing ability and marking just the first try of the season for the prolific Dubliner. He was in superb form early on laying on a second try for Kieran Marmion soon after.

That score was the culmination of a swift counter attack that included a kick into space from Bundee Aki that just about popped up for Healy who timed his offload for the supporting Marmion perfectly. Even at that early stage, all seemed to be cantering along nicely for Connacht against a Zebre side, still without all their key men from the Italian World Cup squad.

It wasn’t a dominant display, both tries had come after the hosts had soaked up the pressure from the Parma based club and struck on the counter attack. Zebre had their fair share of possession and territory in the first quarter, but only three points from the boot of young out half Edardo Padovani to show for it.

The bonus point seemed set to follow for the hosts when Eoin McKeon touched down at the back of an unstoppable maul from a five metre lineout, yet it was Zebre who scored next. The Italians were worth the five pointer for the efforts at that stage and it came from a sublime piece of skill from Australian scrum half Luke Burgess, who executed a brilliant reverse pass for try scorer Dion Berryman to burst onto.