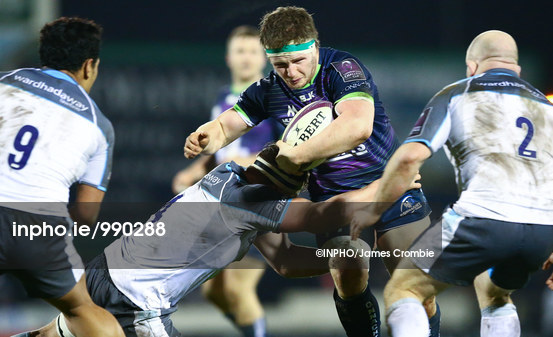 By Rob Murphy in the Sportsground

All things considered, this Friday night win in Galway was another milestone result for Connacht.

The PRO12 is once again priority number one this season. These Challenge cup fixtures could prove to be a negative distraction if they are not managed carefully but the key is, they have been negotiated with precision by an ever changing young panel and that is another reason to be positive.

Leaving aside the fact that it was a home win against an English Premiership side, it confirmed Connacht’s place at the top of the pool. With Brive slipping up away to Enisei in Sochi, the lead is a healthy eight points.

This was a milestone result because of the adversity they faced. Eleven changes from the previous week, just 23 fit players available and a very young backline meant expectations weren’t as high as normal.

Throw into the mix that Connacht’s bubble had burst in terms of the win streak. after a run eight straight victories, they had lost in Cardiff and in the past. That would have led to a slide in form and confidence. Not here, not this time. They bounced back with a clean win, six Jack Carty penalties and a late deftly taken try from a fit again Danie Poolman.

It wasn’t a stroll in the park by any means. When Newcastle scored off a lineout, catch and maul that the home side seemed powerless to stop, there was 15 minutes left on the clock. There was a two point gap on the scoreboard with Connacht ahead 12-10. Carty’s fifth penalty stretched the advantage to five but there was more drama to follow as the tide continued to turn.

Young French referee Thomas Chabaras sin binned Rory Parata with 12 minutes remaining apparently for persistent offside and Newcastle’s replacement out half Simon Catterick stood over a simple kick in the 22 to narrow the gap to just two points again. His miss stunned the Sportsground and his teammates.

For the remaining nine minutes of the sin bin period Connacht completely dominated. They scored ten points, including another kick from Carty, who notched seven kicks from eight on a fine afternoons play, and Poolman’s try from a little grubber ‘kick and chase’ eight metres out from the line.

The South African was only making his fifth appearance in an injury hit season and that was his fourth try.

The half time margin had been 9-3. This was a Newcastle side much changed from their Premiership line up. They are struggling without a win in England’s top flight and have been forced to use this competition to blood some academy stars.

They came to win however, experience heads like Scott Lawson at hooker, Mouritz Botha in the second row and Alistair Hogg at eight kept them on track and very much in the game.

Moreover, there were more than enough signs overall that the struggling Falcons will be better next Sunday in Kingston Park for the rematch and will be hard to beat a second time.

But Connacht now top the pool with 13 points, eight clear of Brive and Newcastle and aware now that two losing bonus points away to those sides combined with a bonus point home win over Enisei will see them safely through to the last eight.

As mentioned at the outset, priority number one for Connacht must be the PRO12 as their rip-roaring start to the campaign has presented an opportunity that can not be ignored.

Over the Christmas period Connacht face Ulster on Stephen’s Day, Leinster away on New Year’s Day and Llanelli away on January 11th. Those games rank as some of the toughest fixtures of the season and the squad will be tested.

Lam’s challenge is to manage resources with an injury toll bordering on the farcical. Many are due back for the Ulster clash with Bundee Aki, John Muldoon, Ronan Loughney and Kieran Marmion are included in that list. Denis Buckley isn’t, his ankle injury went from short term to long term this week and he’ll miss two months. A huge blow.

On a more encouraging front, Eoghan Masterson, Craig Ronaldson and Andrew Browne are available for this weekend. Connacht are limited in how many changes they can make due to European Challenge Cup rules that keep squads to 40 players.

So Lam’s hand is forced for a fixture that is far from pivotal and comes that comes just six days before the biggest game of the season.

Yet all these games are related and that is why Friday’s win was very much in the milestone bracket. The momentum Connacht can garner from another huge result this weekend could be crucial in how the Ulster clash pans out.

Newcastle will be better next week on their 4g home turf and favourites for sure but they are a team lacking confidence and very much mentally frail as highlighted in the final ten minutes of this fixture. If Connacht can exploit that, this remarkable season might have another moment to savour.