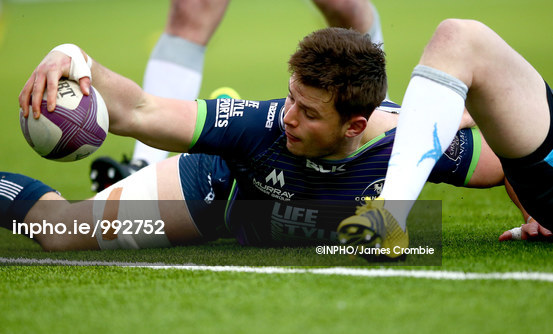 By Rob Murphy at Kingston Park

There’s a story to be told here and it’s not directly related to the outcome. For sure, a 29-5 loss should be no great surprise. A Newcastle team back to close to full strength administering revenge on a Connacht side that were heavily depleted after another spree of knocks, bumps and bruises.

Yet that can’t be the only tale that permeates from a blustery Kingston Park on Sunday. This result, the first half and yet another example of sub standard officiating from leading officials might be nothing more than a tiny footnote in Connacht’s season, but it is worth starting the report at half time to at least ensure that the mood at that very moment isn’t completely lost from the memory banks.

The sides were locked at five points apiece as Ben Whitehouse blew for halftime. With the wind at their backs Newcastle had offered little or nothing to indicate they were going to have enough to win this game. Connacht were the dominant force. A west of Ireland team jam packed full of emerging players but shorn of some of the key components of this hugely successful start to the season.

It was hair raising stuff from the get go. Where Connacht of old would feel their way into a contest after making this many changes and missing that many experienced leaders. The Connacht of new arrived with a familiar ‘why not have a go’ attitude. So in the manner of what was on show at Thomond Park, the Liberty Stadium or Krasnoyarsk before, the westerners served up more ball in hand, heads up, expansive rugby from the first phase. It barely let up until half time.

Now there were mistakes too. A lack of direct runners was a key omission. Some ponderous phases when they reached the edge of the 22. A couple of other misfires in the 22 including a lineout and maul that was well read by the home pack, and a bad defensive mix up, with more than a hint of blocking, that allowed the twinkle toed Marcus Watson to dance through a gap on the ten metre line and sprint home for a soft try.

All untidy and frustrating for sure but they were just a handful of negatives from a half that was brim full of positives for the young Connacht side. Eoghan Masterson seemed to have scored a perfectly legitimate try in the opening minutes after a barnstorming break. However, Whitehouse felt he had been held and executed a double movement. His seemingly lifeless assistant referees showed no interest in helping.

The evidence was far from compelling on first view and the lack of a TMO meant there was no second glimpse. Connacht were denied but not deterred. Caolin Blade was getting good front foot ball and using it well. Newcastle attacks were foiled by strong counter rucking and turnovers, Eoghan Masterson and Rory Parata had two stand out ones along the way.

Niyi Adeolokun had even home supporters taking note of his performance. He was once again in electric form showing blistering pace and eye catching balance in evading tackles at full flight. He had a hand in some of Connacht’s best attacks. Jason Harris Wright, Andrew Browne and Danny Qualter carried well. While George Naoupu was quietly effective and led well.

There were drawbacks. Peter Robb picked up a knock in the 12th minute after what might well be the tackle of the season so far from a Connacht player. His hit on the very impressive Simon Hammersley was a huge momentum turner at a key point but forced him off. It enforced a backline reshuffle with Jack Carty taking up the ten role and Shane O’Leary moving to outside centre depriving us of a prolonged view of the Tipperary native in the pivotal outhalf position.

Watson’s try should have kick started Newcastle but it didn’t. It merely strengthened the resolve of Connacht and they responded with a Danie Poolman try before the break after sustained pressure. his fifth try in six starts this season. Chants of Connacht, Connacht rang around the Northumberland venue as the half drew to a close, hope was a abound.

There was plenty to be concerned about during that ten minute interval. Robb hadn’t returned from his knock so the backline was out of sync. Conversely Newcastle’s key man Hammersley had passed a head injury assessment. Moreover they had seven first choice players on the bench and seemed set to spring them at any point. Meanwhile Connacht were one man short in terms of replacements and ruing the fact that they should have scored more in that first half.

No one expected the first four minutes to go so badly for Connacht. It was the losing of the game pure a simple. On the restart, a poor decision to run the ball rather than utilise the wind led to an error and a turnover and Newcastle pounced. Held up over the line first, then winning a penalty at the five metre scrum which Tane Takulua quickly tapped.

This tap and go sparked the most controversy. Pat Lam pointed out afterwards what was clear to see, it was taken well in front of the mark. Masterson made the tackle but he hadn’t fully retreated. He was sin binned and Mr Whitehouse’s hugely questionable interpretation of penalty tries reared its ugly head again. Despite two other Connacht players in situ, he deemed that a certain try would have been scored.

From there, Connacht were under the cosh. Agulla scored soon after for a 17-5 lead. While they survived the rest of the sin bin, a brilliant break from Hammersley from inside his own 22 set up the bonus point try from Watson. Before a second penalty try from a scrum sealed the win with 24 minutes remaining. That Connacht held firm from there is an important marker but the second half was a disaster for the young side.

It’s onwards to Ulster on Stephen’s Day while the European campaign remains very much on track despite the defeat. A win in Brive and a home win over Enisei will see Connacht through. So all is well. The sombre mood in defeat only serves to underline the competitive edge that these young players have. More than a few will be in the match day squad this Saturday for the biggest game of the season so far as Ireland’s top two provinces in terms of form, go head to head.